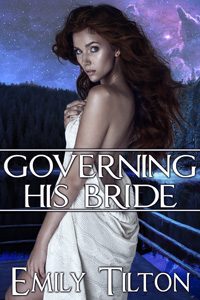 Priscilla Auden’s mother brought her to the doctor for her premarital exam a week after she had accepted William Verner’s proposal of marriage. In the enlightened society of Prosperia colony, girls who would soon marry must, according to section 37(a) of the statutes governing relations between the genders (often called the pleasure laws) see a government-certified marital physician for what the statute termed a premarital assessment and instructional examination.

Before her mother left Dr. Gowdy’s office, the doctor asked a series of pointed questions about Priscilla’s upbringing and what her parents had observed with respect to her social life and her habits of hygiene. Priscilla couldn’t look either at the doctor or at her mother while these questions were posed and answered; she found herself gazing with flaming cheeks at the strange device doctors and nurses used to take a person’s blood pressure, as Grace Auden said humiliating thing after humiliating thing about her nineteen-year-old daughter.

“Tell me about Miss Auden’s development, Mrs. Auden. It’s normal for girls to be a little too embarrassed to speak frankly about such matters themselves.”

“Of course, doctor. I remember when my own mother spoke with old Dr. Frere on this matter, before I married Mr. Auden. I just wish I could give the same kind of report about Priscilla that my mother gave Dr. Frere about me.” She sighed. Priscilla felt that if the medical building collapsed on them it might be better than having to sit there.

“Oh, come now, Mrs. Auden. I’m sure the years have made your memory of that day a good deal rosier than it really should be. Every mother has a peccadillo or two to report.”

Priscilla darted a glance at her mother and saw that indeed Grace Auden’s cheeks had turned a little pink. She felt grateful to Dr. Gowdy for that at least.

“Well… I suppose so. One of my suitors had stolen a few kisses, and it had confused me greatly,” Grace said. Priscilla felt for a moment that perhaps this interview wouldn’t be quite as bad as she had expected. “But I’m afraid I have to report that since she began courting, both her guardian and I have found that Priscilla’s hygiene has left a good deal to be desired.”

“Mother!” Priscilla said. “You said you would never tell anyone!”

“Miss Auden,” Dr. Gowdy said, rearranging some papers on the little desk in his examination room. “I’m a doctor. Whatever happens in my examination room happens in complete confidence. Your mother is absolutely right to tell me about these things. Otherwise, I can’t help you and your intended get off on the right foot in your married life, the way the laws make clear I need to do—which is also, I believe, the correct procedure from a purely medical point of view. We’ll talk more about that once your mother has gone out to the waiting room.”

He turned back to Grace. “Tell me more, Mrs. Auden. You say you and her guardian have found her hygiene troublesome?”

Priscilla couldn’t even look at the blood pressure device now. She gazed down at her hands, folded in the lap of her dark green skirt. It had been her favorite skirt to wear to school, her final year, and all her friends said she looked so pretty in it—so pretty that Priscilla would definitely get the proposal from William she had hoped for so much.

William Verner: tall, dark, and handsome. Five years older than Priscilla—twenty-four, the age at which young men who had proven their worth to society could come to senior dances and court the girls who had turned eighteen. He had family money, of course, but he was also the energetic head of Verner Global Supply, a company that had started out as Prosperia’s first lumber mill and still maintained the planet’s largest sustainable forest.

William had worked as an old-fashioned lumberjack in that forest for three years, at the behest of his father, who wanted to teach his heir old-fashioned values using the same methods by which every Verner son had learned them for the past three hundred years. William was in every way the catch of the season and, if the older girls spoke the truth, of many a previous season as well.

He had talked to so many girls that night—and Priscilla had talked to nearly as many boys. She left the coming-out dance with several promises of young men to call on her at home, including William. Her guardian Mr. Tester—an old family friend and nearby neighbor, as unmarried girls’ guardians usually were—had, in consultation with Priscilla’s father and mother, selected three suitors for her from the young men who called.

“But,” Mr. Tester said when he had sat Priscilla down in his den, where they had their meetings about her coming out and her marital prospects, “I think you can understand that your parents and I have the highest hopes for Mr. Verner.”

“Do you like him? I find his manners most pleasing.”

“Well, then,” Mr. Tester pronounced with a genial air, “you may allow him a kiss goodnight if you like. Nothing more.”

She felt the blood rise even hotter to her face. “Yes, sir.”

“The others may hold your hand, of course, but no kissing until we know about Mr. Verner’s intentions. Do you understand, my dear?”

Mr. Tester had cleared his throat then, and said in a different tone, “I don’t expect that any of these three will attempt to take any liberties with you, Priscilla. They’re all very well-mannered young men. But a pretty girl like you will sometimes have, let’s say, an unpredictable effect on a young man, and this can be especially the case when the girl has developed a little early, the way you have. Go ahead and take off your clothes for me, my dear, so I can show you just what I mean.”

Priscilla of course, like every Prosperian girl of the upper class, had found this a terribly embarrassing experience. In fact, looking back at it now in the doctor’s office, really the medical exam couldn’t hold a candle to her meetings with her guardian, could it?

Mr. Tester didn’t touch Priscilla’s naked body, to be sure, but he did make her bend over in front of him and touch her toes while he talked to her.

“You have a shapely bottom, Priscilla,” he said. “And your breasts have come along very nicely. The red hair between your legs is a sight each of your three suitors would very much like to see, and the little pouting slit you have there is, as I believe you’ve been instructed in your courtship class at school, a great subject of their interest.”

“What did your teacher tell you about a suitor’s interests?”

“Or,” said Mr. Tester, “your guardian and your physician of course. Yes, that’s right. When you have an accepted suitor, you’ll learn more about your husband’s rights and privileges, and about the difference between his body and yours. In the meantime, you’ll be inspected like this after each date you go on with a suitor, to determine whether any immorality has arisen either between you and your young man or on your own part.”

Priscilla bit her lip. How would he know?

“I imagine you would like to know how I will determine whether any immorality exists,” Mr. Tester said in a low voice. Priscilla suddenly felt very funny in her tummy, and also, to her confusion, down below her tummy.

“When immorality has occurred, or may occur, your private part will show me, Priscilla. I shan’t say anything more on the subject now, and I hope I shan’t have to say anything at any point in the future. You may straighten up and put on your clothes, now. I’ll see you at your house after your first date, and I’ll inspect you in your own room.”

Oh, if only Mr. Tester hadn’t had to say anything more!

Now, in Dr. Gowdy’s office, though, the consequences of her own body’s betrayal, when William had kissed her goodnight for the first time—of the series of events that had unfolded after that—seemed to have brought her to a sort of shame Priscilla had never imagined.

“I think I understand what you mean, Mrs. Auden,” the doctor said. “Did Miss Auden’s guardian detect something amiss?”

Still Priscilla couldn’t look up, but she heard the gratitude in her mother’s voice for the doctor moving the conversation along.

The doctor referred to his notes, Priscilla saw out of the corner of her eye, and nodded. “Her accepted suitor, correct?”

“That’s right, doctor. Mr. Tester came downstairs after he had inspected Priscilla and told us that he had detected immorality.”

The doctor clucked his tongue. Then, to her horror, he addressed Priscilla.

“Priscilla, in this sort of situation, it’s usually best for you to tell me in your own words what happened. Then your mother can fill in any other details I need.”

She looked up at him desperately, and then over at her mother. She turned back to the doctor and opened her mouth, but no sound came out.

Instead, her mother made it much worse. “That wasn’t the end of it, doctor.”

“In the end we felt terribly fortunate that Mr. Verner still proposed when he heard—as of course Mr. Tester was honor-bound to tell him—about Priscilla’s little problem.”

At that point, at least, Dr. Gowdy took pity on Priscilla.

“Mrs. Auden, I must say that you needn’t be so hard on Miss Auden. I take it she’s your eldest daughter?”

“Perhaps you’re a little less lenient than you might be since it seems you were in the one third of young ladies who are never detected in immorality.”

“One third?” Grace said, and now she sounded as if she felt a little faint at this news. “Well, yes, doctor. I certainly was.”

“Well, as I say, fully two thirds of the young ladies we see are detected by their guardians in some form of immorality.”

“But, doctor…” Priscilla had been looking from the doctor to her mother, thinking that perhaps a ray of light had appeared, but guessing what her mother would say now, she hung her head again.

“I imagine,” Dr. Gowdy interrupted, “that you’re about to tell me that Miss Auden’s immorality extended further than a little arousal after a date?”

Oh, if only Priscilla could just faint, or fall asleep, or vanish through the floor!

“Well, then, let me tell you that even girls who have been detected in multiple incidents of self-abuse—the upper five percent, we sometimes call them—make very good wives, as long as they have the proper guidance from their husbands. I can’t imagine that Miss Auden falls into that category, though.”

“No…” Grace said, though the length of the vowel seemed to indicate some doubt.

“Miss Auden,” the doctor said, and waited for her to look up at him. “Do go ahead. When your guardian detected the immorality, did you confess to having committed an impropriety?”

“No,” Priscilla said in a very quavery voice. “Mr. Tester said I should let Mr. Verner kiss me, and I did, when he was saying goodnight.”

Priscilla bit her lip, and then she felt her forehead pucker.

“Don’t worry, Miss Auden. As I said, I’m a doctor, and I understand about the way young men can make young ladies feel. It’s natural to like being kissed.”

Mrs. Auden made a little sound then that seemed to indicate that she didn’t think she entirely agreed with the doctor, but Priscilla didn’t look at her.