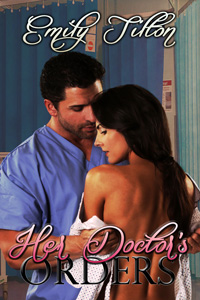 Levi Hunter sat at his kitchen table watching the news and eating Chinese takeout. A psychologist’s hours were better than an ER doc’s—definitely. It was just taking a while for Levi to internalize the difference, after finishing the psych residency with the rigors any residency brings. His reason for staying at his new office until nine, on the face of it, was that he had three articles to read, but he had a nice little office in his house, perfect for reading—and the kitchen table was a better, homier place to read than his office, if he were being honest. But he had sat in that office reading, until nine, at which point takeout—for the third night running—would be the only option.

At least he could come home to his comfortable, if small, house and watch the news.

He had finished his first dumpling when he realized the story about a spectacular crash just an hour before on Main Street concerned a young woman he recognized.

Kendra Jackson. The name came back in an instant.

In shock, both at the strangeness of recognizing someone on television from his own past and at the memories that came flooding back, he watched the footage of Kendra’s pickup truck, which she had wrapped around a telephone pole, and then his eyes widened as he saw her led from the truck to a police cruiser.

Levi’s mind flashed back to the night, three years before, when he had made the crazy decision to retrain as a psychologist. Kendra’s mother had nearly killed four people, and Kendra had, with evident justice, told Levi that her life was now ruined. Levi had hugged her and told her that everything would be okay. As he had looked inside himself, though, he had seen that although he could muster a tone of voice that sounded reassuring, he wanted desperately to do more.

Levi wanted to be able to tell that sweet eighteen-year-old, who would then at the very least have to delay her dreams because of the terrible thing her mother had done, what he was doing to make sure this kind of thing didn’t happen to people. When he told Kendra that it would be okay, he believed it. Levi, without being especially religious, had an unshakable belief in life.

Levi had faith that despite the terrible suffering that people like Lori and Kendra Jackson experienced—and that Levi Hunter had experienced as well as he had suffered his own share of family tragedy—the very essence of human life, and even of biological life itself, demonstrated that on the larger scale, things would always turn out alright. If they wouldn’t turn out alright for Levi, or for Kendra, they would turn out alright for other people of good will, in the long run. The thing was to make sure that you helped, as much as you could.

That night, caring for Lori Jackson and talking to Kendra Jackson about her dream of becoming a psychologist, Levi had realized that he wanted to help better. He didn’t want to patch up the people who got hurt in the accidents drunk drivers caused; he wanted to make sure those drunk drivers came to terms with their drinking problems before they got into the car.

Levi put the takeout in the refrigerator and got his keys.

“I hope you’ll be able to talk some sense into her,” said the sergeant, a gruff, older man with copper skin and black hair, who wore his clear New Mexico heritage lightly. Since moving to this exquisitely beautiful state for medical school, Levi had come to respect such elders very greatly. “Such a sad goddamn story.”

“I haven’t seen her in three years,” Levi said. “Can you fill me in a little?”

“So you know her mom’s in the pen, right? That’s its own sad story—but thank God it wasn’t worse.”

“Oh, wow—so you saved those girls’ lives.” The sergeant extended his hand, and Levi shook it.

“Anyway,” said the sergeant. “Kendra dropped out of school and came back here and waitressed. A few months ago she got the late shift bartending job at the Seven—you know, the bar on Main Street?”

“Well, she’s headed the same way her mother went, to make a long story short. Near as I can make out, this was her day off, and she decided to drink it away and then drive herself on home. She got about a hundred yards before she hit the pole. Thank God for that at least, or she would have been going a lot faster.”

“Does she have any family around here?”

“She doesn’t have any family at all, Doctor, as far as I can tell, besides the mother in the joint, and no friends worth a damn. She’s got a boyfriend, or at least I’ve seen her hanging around with him after the Seven closes, but the guy I’ve seen her with—well, another girl’s got a restraining order against him, and if you manage to get through to her at all, you should do anything you can to get her to give him his walking papers.”

He led Levi to the cells. Kendra sat on the shelf-bed in the little room, with her head in her hands.

“Well, Kendra,” said the sergeant gruffly, but not without kindness, “you got very lucky tonight. Dr. Hunter here just bailed you out.”

When she heard “Dr. Hunter,” Kendra, who had not moved at all as the cell door was opened, started and turned to face Levi. “You?” she said. “Bu’… why… I mean, why wou’ you…?” Kendra’s consonants—the ones she could even manage, anyway, since the rest of them had dropped away entirely—sounded thick with alcohol, and her voice had the husky quality of a person so drunk she can’t really even properly hear herself.

Kendra shook her head, her disheveled, shoulder-length brown hair swinging wildly, like grain in an uncertain wind. “I don’t understand,” she said. The motion of her head seemed to make her feel a little sick, and she swayed on the bed. Then she said, “Bu’ I always liked you… even, you know, when it turned out you were so fuckin’ wrong.”

The sergeant looked at Levi. “Sure you want to do this?” he asked.

“I am,” Levi replied. He stepped into the cell and helped the unresisting Kendra up, and steadied her on the walk out of the police station with his arm around her waist. The warmth of her body through her T-shirt made him acutely conscious that he hadn’t had a girlfriend in two years, to his fleeting dismay. Even worse, at one point Kendra swayed precipitously, and Levi actually had to grab her underneath the T-shirt, and in the process touching the softness of the skin on her belly and even brushing up against the curve of her breast, which made his head feel a little light.

“What are you doin’ this for?” she kept asking. Sometimes, on the drive home, she would alternate that with “Thank you anyway, Doctor,” struggling mightily with the “ct” in “doctor,” and “I live on Rosedale Stree’, ‘kay?” After a few rounds of these indistinct sentences, she started to cry.

By that time they were nearly to Levi’s house. Levi patted her hand on the car seat and said, “It’ll be okay. I promise. I’m taking you to my house, just for tonight, and when you’re sober we’ll talk about how to make sure it turns out fine.”

Levi opened her door for her and helped her inside, thinking despite himself that even drunk and sobbing, Kendra looked beautiful, at the very least. Her long legs below the cutoff denim of her shorts somehow managed to be graceful even when she was swaying slightly, and even her grief couldn’t kill a spark of apologetic gratitude in her eyes as she looked up at him.

He led her to the guest bedroom and helped her lie down on her side, and went to get a glass of water. When he returned to her bedside, he helped her up into a sitting position, one arm wrapping firmly around her upper back. She had already closed her eyes and was breathing somewhat deeply.

“Kendra, wake up. You need to drink this before you go to sleep,” he said firmly, holding the water to her lips.

She blinked up at him, squinting her eyes as though the room were too bright. “Ew… I don’t want any,” she mumbled, turning her face away.

“I’m sorry, but you need to have some,” he replied, following her head’s movements and keeping the glass at her lips. “Listen to me, Kendra. Take a few swallows, and then I’ll let you rest a little.”

Kendra mumbled something that sounded an awful lot like “fucking doctors…” but that wasn’t quite intelligible as he began to tilt the water so that a bit of it entered her mouth.

She held the water in her mouth as though it was a foreign substance and stared up at him, her eyes mutinous, as he continued to hold her in a sitting position.

“Swallow,” he instructed, a little surprised when she immediately did so. “Good girl.”

He held the glass as he coaxed her to drink nearly all the water, but just as soon as he put the glass down onto the bedside table, she gave him the smile of someone who is about to be sick, and he grabbed the wastebasket just in time.

As he held her hair back for her, he realized that although he was thirty, he had never actually rendered this iconic service for a vomiting girl before. Levi drank from time to time—wine, mostly, though he did enjoy Scotch and the occasional beer—but even in college he had never liked feeling out of control, and so hadn’t wound up in the kind of situation that led to such hair-holding.

Kendra seemed to be sobering up a bit in the midst of being sick, because she began to say, in an oddly appealing way, “I’m so sorry,” between heaves.

After a while, it seemed Kendra had pumped her stomach fairly effectively, and he wiped her mouth and lay her back down on her side while he fetched another glass of water. He made her drink that one too, and it seemed like she would hold it down.

Her crying had stopped when she came through the door, but her eyes were red and her cheeks streaked with mascara. Still, when she gave him a shy smile and said, a little more clearly, “Thanks,” Levi thought, “Dangerous.”

“Time to get some sleep,” he said.

“Okay,” Kendra said, and lay down with her back to him. Then she turned back toward Levi and said, “I’m so sorry, Doctor. I really… I mean, you didn’t have to.”

“Okay,” Kendra said, and turned back again toward the far wall. But a moment later she rolled back onto her other side and said, “I really am sorry.” The apologetic gratitude in her eyes, now less clouded by drunkenness, seemed even more charming now.

“Okay,” said Kendra, and she turned obediently back to the wall. Her tanned shoulders began to rise and fall in a more gentle rhythm.

Levi sat in a chair by the bed and watched Kendra until she was sleeping soundly enough that the danger of turning on her back had passed. As he watched, he made a mental plan for dealing with her truck and starting to get her pointed in the right direction, emotionally. When he finally fell into his own bed, he drifted off hoping that he could find a way to keep his promise about everything turning out okay.