Her Officer in Charge by Maggie Carpenter – Sample 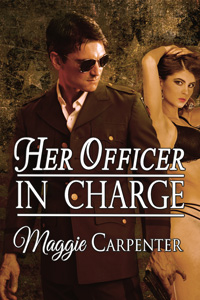 Bella froze. Her heart was thumping so hard she was sure it would be heard by the two marines striding down the dark street. Flat against the wall of the house, she could feel the edges of the wooden planks pressing painfully into her back. She wanted to peek, but she daren’t, and, wondering why she was so foolhardy, she held her breath as she heard the men draw near.

The footsteps were growing closer. She was grateful the moon was a mere sliver and the building was set away from the streetlamps. Any light illuminating the area was minimal, and there was none where she was standing.

The two marines marched past, their backs straight, their shoulders squared. They didn’t even glance in her direction, and as they disappeared, the sound of their heavy boots evaporating like mist into the darkness, she let the air out of her lungs and dropped her head in her hands.

The rules had been made clear; no roaming around the camp.

Though they’d driven together in one car, she’d told Scott, her sound man and assistant, to leave the camp without her and she’d call when she was ready to be collected. He’d vehemently protested, but she’d insisted, and when Bella made up her mind about something there was no room for debate. Now she was on her own, lurking around a U.S. military base.

Gathering her wits, she continued creeping around the building, eager to find a way inside so she could sneak into the hiding place she had seen just a short time before. She wanted to watch the goings-on, which she was sure would include a few naughty girls getting their butts spanked, or at least that’s what she assumed based on the conversation she’d overheard.

She could vaguely hear people chattering, and as she cautiously turned the corner and slinked forward, the sound of a sensuous, haunting melody drifted through the air. A slow, seductive saxophone made her pause, and, closing her eyes, she allowed it to momentarily sweep her away. She knew more than most the mesmerizing spell a melody could weave, and as she surrendered to its pull, a scene began to play itself out in her mind’s eye.

She was dressed in a black corset, the garters holding up sheer black stockings, no panties hiding her charms, and, with her wrists shackled to a chain above her head, she was at the mercy of a man she called master.

I want it so badly, it hurts. Twinkle, twinkle, little star, please bring a yummy dom into my life.

Taking a deep breath, she continued on her mission, and moments later she was at the back door. She knew it led into the kitchen, and as she approached she noticed the blinds on a nearby window weren’t completely closed.

Moving to the window, she discovered it was higher than she’d thought, certainly too high for her to look through. Glancing around, she searched out something upon which to stand, the glow from the narrow slit between the bottom of the blinds and the windowsill spilling enough light for her to see what was in the immediate area. She spotted two cardboard boxes marked Produce, but they would never bear her weight, then seconds later she spied a milk crate. Delighted with her find, she carried it to the window, settled it on the ground, made sure it wasn’t wobbly, then stepped up. It was exactly what she needed, and, pressing her face to the glass, she peered inside.

There was a platter of appetizers neatly laid out on a tray next to a carafe of red wine, and some rolled-up paper napkins, but the kitchen was empty. Relieved, but pulse ticking up, she climbed carefully off the crate and stepped to the door, pushing down the handle. She wasn’t surprised that it was open; she’d been counting on it. A private event taking place in a function room on a marine base; why would they lock the kitchen door?

Gritting her teeth, she pushed, praying the hinges wouldn’t squeak. They didn’t, and, opening it further, she poked in her head. The kitchen was spotless, no surprise there, and she saw the door that led into the main room. It was where she’d put on her act, and if she felt brave enough to sneak in, her hiding place was a folding screen just inside. The music was low, and there was very little of the chatter she’d heard earlier. Imagining what salacious activities might be taking place was compelling her to move forward, but her worry about being caught was paralyzing her.

Okay, it’s only a few seconds to the door, and just a couple more to slip through it and hide behind the screen. Get a grip, Bella. Go in or go out, but do something.

Closing the back door softly behind her, she scooted across the gleaming kitchen floor, and pushing down the handle of the door into the main room, slowly opening it, she peered inside.

When she’d left just a short time before it was brightly lit, but now it was dim, and strategically placed candles were flickering their soft shadows against the walls. The furniture had been changed. It was no longer set up to face the dance floor to accommodate an audience, but brought together in intimate groupings. She spied a couple dancing to the seductive music, and some others clustered together softly talking.

Abruptly realizing the bright light from the kitchen might draw attention, she hastily closed the door and daringly darted across to the screen, but to her shock and dismay she discovered that the edge of the end panel was flush against the wall. Pulse racing, she pushed it away, but the entire screen began to teeter. Barely controlling her panic, she was able to grab it before it fell to the floor, and glancing across the room, she couldn’t believe her luck; no one had noticed her. She tried again. This time she was successful, managing to control the screen as she gently shifted the panel just enough to allow her to slip behind it. Safely hidden, she sank to the floor and let out a heavy breath.

She knew sneaking back to the venue wasn’t just totally inappropriate, but foolhardy and reckless. She loved performing for the military, and she shook her head, wondering what had possessed her to take such a chance. Gathering her wits, she crawled forward on her hands and knees and peered through the crack in the panel, and as she focused on the couple dancing, she noticed the man was moving his hand across his girl’s backside, pinching every few seconds. The sight sent a wave of heat through her sex, and she was wishing she could be the woman on the dance floor when she suddenly saw the man who had captured her attention when she’d first arrived. He’d been introduced as Captain Vince Valenti, the officer in charge. His manner had been brusque, but she could sense something kinder behind his shockingly bright blue eyes, and she hadn’t quite believed his aloof facade.

Though he was out of his crisp white uniform, she found him just as attractive as when she’d first laid eyes on him. Dressed in a black T-shirt tucked into black slacks, his muscles were stunningly apparent. There was an open wall that led into the foyer, and he was leaning his shoulder against the frame. His arms were crossed, he had one foot over the other, and he was just standing there watching the small crowd. She could easily imagine his powerful arms sweeping her off her feet and carrying her away, but the floor was hard under her knees, and, slowly standing, she took a few steps back to rest her body against the wall.

She’d pushed her luck, and not wanting to risk staying there much longer, she decided to take one more peek at the handsome captain before slipping out and calling Scott to pick her up. Creeping back to peer through the screen, her gaze fell upon the entrance into the foyer, but to her dismay she discovered the compelling captain had left his post. From her viewpoint she couldn’t see the entire room, so she moved to the other end of the screen. Able to see more of the room, though the officer in charge wasn’t to be seen, there was a couple who caught her attention.

Bella’s fingertips were resting lightly on the screen, and for a brief moment she thought she felt it move, but the couple was playfully fighting and the man had grabbed the woman by her wrists. Convinced something exciting was about to happen, she was so focused on the developing tableau, she wasn’t paying attention to her surroundings.

Something exciting was about to happen, but it had nothing to do with the couple she was spying on.

A hand suddenly locked around her upper arm and spun her around. Shocked and gasping, she stared up at her captor, and found herself looking into the blazing blue eyes of the officer in charge, Captain Vince Valenti.