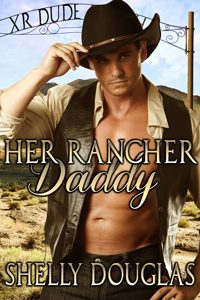 Over her shoulder, Jessie watched as the firm-jawed, handsome cowboy dismounted his horse before taking determined strides toward her, and it didn’t take a genius to figure out that she was in big trouble.

“Easy does it,” he said, wrapping his large hands around her waist to gently help her down from the horse’s weathered saddle.

“I was just trying to get Sammie’s attention. Who knew he’d gallop off like that?” she defended.

“You didn’t think a blood-curdling scream would scare Sully? Every horse on this trail could’ve been spooked from the high-pitched noise that came from your throat.” His lips formed a resolute line as he angled his head toward her. “Did you read the important information on riding horses that was given out with the welcome packet?”

“I want to, but I’m completely exhausted by the end of the day…”

“This is the third time I’ve asked you to read that brochure. Since most of our guests don’t have much knowledge about horses, we put those riding rules together for your protection as well as our animals. Both you and my gelding could’ve been seriously hurt. As a matter of fact, everyone on the trail was in danger when he reared back on his heels before taking off.” With swift dexterity, Trent took her by the wrist and glanced around the grounds, before heading toward a tree stump. “This oughta do just fine,” he said, planting himself on the short, thick wood.

“W-Why are you sitting down? Aren’t the others waiting for us?”

He firmly grasped Jessie’s hand and pulled her close before staring her straight in the eye. “I’m gonna haul that pretty bottom of yours over my knee. Right here and right now.”

She tried to get free from him, but he managed to intertwine his leg around hers, trapping her in his strong hold. “Are you crazy? What if someone comes looking for us?”

“If anyone from the riding group catches a glimpse of me tannin’ your naughty hide, I think it would be the least of your problems at that moment,” he added nonchalantly, tugging her blue jeans and panties down to the middle of her thighs.

Her face radiated a bright shade of crimson as he bent her over his lap. And though he was much stronger, she still attempted to get away, squirming and writhing over the stiff denim fabric covering his thighs. “Noooo. Don’t do this. Please let me go!” she pleaded and yelped.

But he held onto her waist with steeled determination. “I promised to spank your bare backside the next time you broke the rules, and I’m a man of my word,” he scolded with a grim expression. “Now hold still, and take your lickin’ like a big girl. You deserve it, and you know it,” he continued, his heavy hand bouncing from one tender cheek to the other.

“You know better than to talk like that, young lady,” he firmly advised in a low gravelly voice before his open palm landed another sharp chastisement to her fluttering buttocks. The sight of her blushing red bottom had his aching erection practically bulging out of his pants, but in the quick minute that he spent gazing at her shapely ass, Jessie’s moxie kicked into high gear, and she sprang upward, trying to break away from his grasp.

“Be still,” Trent warned, repositioning her hips over his thighs, securing his leg over hers. “And how many times do I need to remind you about that disrespectful language?” he added in a stern tone, watching her pert, round globes vibrate with each swift smack. She peered up at him, her eyes brimming with tears as she wiggled and jerked trying to get free, but determined to keep her in place, he shifted her back over his knee with one hand and continued to swat her reddened rump with the other.

“Please stop! I can’t take anymore!” she shrieked, thrashing about, shamelessly exposing her wanton pussy in the process.

“Shh, shh, relax, little lady. You know your pride is hurting more than your roasted backside,” he soothed, caressing his palm over her well-spanked behind while lustfully enjoying a clear view of her moist womanhood. As she stopped crying and her breathing returned to normal, he pulled her up onto his lap and ran tan, thick fingers through her shoulder-length strawberry blonde hair.

“I’m assuming my princess never received a spankin’ like that from her daddy,” he whispered, folding her head under his chin.

Jessie’s sad, wet eyes closed, her face glowing with heat. “He was never around long enough to punish me.”

“Maybe it’s what you’ve always needed,” he said, raising her chin with one finger.

Embarrassment bloomed in her cheeks while her sex dripped with desire onto his jeans. “A spanking or a daddy?”

His demeanor was gentle and inviting as he pressed his forehead to hers. “Both.”

Just hearing his answer caused her eyes to sparkle with possibilities. “But you don’t look old enough to be my daddy.”

While shifting her into another position, his smile wobbled as he gazed at the soaked stain on his dark blue jeans from her obvious arousal. “I don’t think age has anything to do with someone looking after all your needs, missy. Do you agree?”

After a shivering inhale, she finally managed a gentle, “Yes, sir.”

“I’m takin’ a shine to that answer.” He kissed her tearstained cheek before squirming to shift his weight from side to side, attempting to readjust the fevered ache between his legs. “So how does it feel to be cared for?”

“My bottom burns, but the cuddle is awfully nice,” she said, eyeing the bulge practically bursting out of his zipper.

“When we get back to the ranch, I’m gonna to take a cold shower, while this beautiful, cherry-red hind end of yours spends some time poking out of a corner in my room.”

She traced the length of his hard cock with her short fingernail. “Come on, Trent. You can’t be serious.”

“Oh, but I am,” he maintained through a crooked smile. “And we both know it’s not in your best interest to bait me right now, darlin’.”

“Remind me one more time where we’re going, please?” Jessie facetiously asked her twin sister, buckling the seatbelt prior to takeoff.

“The place is called the XR Dude Ranch, just outside of Tucson, Arizona. I did a lot of research on luxury dude ranches, and this one looks fantastic. Beside horseback riding and hiking, they also have all the bells and whistles: outdoor heated pool, home-style hearty meals, and a spa. It seems they’ve carved out their own little niche in the market.”

“But seriously, Sammie, what in the hell are we going to do there for two weeks?”

“Really? And I thought you’d be happy fly fishing fourteen days in a row,” she retorted with a smirk. “Not to mention the bonus that you’ll be two thousand miles away from Ben Levy.”

“I don’t see any benefits of a vacation like this,” Jessie snorted. “Why couldn’t you have booked a place in Maui? Then I’d be six thousand miles away from that asshole.”

“Because I’ve wanted to ride a horse my entire life, and the cowboys in their advertisement looked like the ones at the top of my bucket list! Plus, it was my turn to pick the vacation spot. Remember taking turns? We learned how to do that in kindergarten.”

“For God’s sake, is this adventure a result of those ridiculous romance books you’ve been reading?” Jessie grabbed her armrests and held on for dear life as their plane rolled down the runway gathering speed.

“I hope you took something to help with the flight, because it’s no secret that you’re a white-knuckle flyer,” Sam noted casually before switching on her e-reader.

She nodded and leaned her head back. “I did, but it hasn’t kicked in yet. So, go ahead and enjoy reading one of your silly fantasy stories while I tremble in fear and utter terror on this Godforsaken plane.”

Sam let out a sigh of exasperation before setting her Kindle aside. “So, my dear sister, how is it that a successful, intelligent young attorney such as yourself can be so afraid of flying? We all know the statistics show that it’s much safer to travel in the air than on the ground.”

Jessie’s slim fingers drummed on her thighs. “Let’s see, if this plane took a nosedive in the ocean—who would miss me?”

“Well, besides me, Ron would miss you, but since we’re your siblings, I’m not sure that we count,” Sammie rejoined, stifling a giggle.

“Thanks so much for making a point about my lack of friends. But it’s not because I’m unfriendly—I just don’t have time. You know my work takes precedence over everything else.”

“Maybe you just need to prioritize your life. I’d think it would be difficult to cultivate friendships while your nose is stuck in a stack of legal briefs. Of course, you did come up for a breath of air once in a while to take crap from that scumbag…”

“Okay, I hear a lecture emerging, and I’d like to make a vacation rule. For two weeks, let’s not talk about my ex-boyfriend.”

“If you meet a handsome cowboy on this vacation, there won’t be a need to bring up that asshole’s name. Did I mention the information on the range owner’s website came complete with full photographs of several hunky-dunky lookin’ cowboys?”

“A couple of times. For God’s sake, Sammie, you have a one-track mind,” Jessie said, rolling her eyes. “But on the bright side, your Western accent is improvin’!”

“We’re both twenty-eight-year-old single and successful attorneys. I see no reason why we can’t have a little fun now and then. Jesus. You work seventy-hour weeks and rarely make time for yourself.”

“You have a point, but I seriously doubt that I’ll find Mr. Right on a dude ranch. Unlike you, I’ve never had a yen for a cowhand.”

“I’ve heard they’re an acquired taste, but you never know,” Sam teased. “Now can I get back to my book?”

Jessie nodded and tilted her seat backward. As the plane suddenly jerked, her fingers returned to the black vinyl armrests in a death grip, and her mind began to race…

Sammie has a point. Beside my brother and sister, I don’t have any friends—all I have is a bunch of acquaintances. The job is great, but Manhattan just isn’t my cup of tea.

As the aircraft rose above the clouds and settled, her eyelids fluttered and lowered.

All I’ve ever wanted was to enjoy my life with people who love me, just the way I am.

Jerking her head upward as the plane hit the runway with a thud, Jessie turned to Sam. “We’re here already?”

“Yep. And though there was an abundance of snoring, the entire flight crew and I thanked God for that Dramamine you took. Oh, and don’t forget about the time change,” she reminded, pointing to her watch.

“They’ve sent a van to pick us up and someone will be waiting down by the baggage claim.”

Jessie’s smile was lopsided as she rubbed her hands together. “Oh, good, I’ve always wanted to see my name posted on a sandwich sign.”

“This is going to be our best vacation ever,” Sammie stated, ignoring her sister’s snarky attitude. “I can feel it in my bones.”