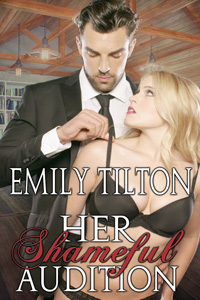 This is the story of how a girl who happened to be the most beautiful, most talented actress in Hollywood got to live a fantasy that seemed impossible: submitting to the firm hand of a man she adored.

This is the story of how a guy who wasn’t a movie star got to live a fantasy that seemed even more impossible: directing the biggest movie star in Hollywood. Deflowering her. Dominating her, and training her to please him exactly as he liked. Then, finally—most impossible of all—living happily ever after with her.

Like nearly everyone else in the universe, the first time Michael Rollins saw Kirsten August she was running from zombies. Even then, the very first time he saw her, Michael knew that Kirsten had to end up in his arms. He also knew she never would end up there—that in fact he would never even meet her in person—the girl who from the very beginning he thought of as “Kirsten August, movie star” because she embodied for him everything about being an unreachable, perfect movie star.

At least he didn’t have to save her from the zombies, because hunky Clark Hammond, playing the local sheriff in Dead Right, did that. Kirsten’s character’s geeky, inane boyfriend had been eaten by the zombies and though the sheriff—Clark Hammond, the only real star in the movie—was married, it was clear that Kirsten’s mousy, brainy sophomore would henceforth be dating the high-school quarterback. He had, thankfully, displayed his sensitive side when his own girlfriend suffered a similar fate, so he clearly merited Kirsten’s character’s affections.

Dead Right went down into film history as an utterly forgettable summer horror flick. It was nevertheless remembered by Michael and millions of other eighteen-year-old boys as the first moment they laid eyes on Kirsten August.

For the next five years Michael found that Kirsten’s near-perfect career arc, from Dead Right to the film for which she won her best-actress Oscar, The Haunted Air, seemed to occupy much more of his life than it probably had any right to. Every time he opened the New York Times film section and saw her uniquely gorgeous face, platinum blonde hair nearly always done up in a loose knot that seemed to make him weak in the knees even if he were sitting down, the same thought that he’d had when leaving the theater where he’d seen Dead Right came back: “She would fall in love with me, if she met me.”

Almost finished with film school now, he went with his on-again off-again art-director girlfriend Heather to see The Haunted Air the night it came out. He and Heather broke up permanently that night because of the film. Michael never knew for sure whether Kirsten August had somehow caused him to confess to Heather that he’d like to spank her, bringing about a relatively amicable parting of the ways that included only a single “That’s twisted, dude,” and no explicit accusations of abuse.

Yes, he never knew for sure, but later Michael would develop an elaborate reading of The Haunted Air in which he semi-jokingly celebrated Kirsten as herself responsible for the break-up that left him ready to take her in hand just three months after she won the Oscar, when her near-perfect career arc became a near-perfect disaster.

The Haunted Air was about a girl who saw visions of the future; the dénouement of the film involved the heroine finally believing that what she saw was real.

“Submitting,” Michael would say. “She submitted to the higher power,” (truthfully, this represented a major plot-hole in the film, since the script never explained what was responsible for the heroine’s visions.) According to this theory, seeing Kirsten submit made Michael realize at last that he wouldn’t be happy in any relationship that didn’t involve a high degree of power-exchange, even if it were only in the bedroom.

Her character in The Haunted Air refused to see that her premonition of the plane crash hadn’t caused the plane to crash. She kept blaming herself, breaking down in an elevator before finding the strength to carry on (this was the scene that all the critics called “Oscar-worthy,” and it was indeed extremely moving.) In Michael’s imagination, he entered the elevator, and pushed the emergency stop. Then he told Kirsten to bend over and touch her toes, and then he pulled her skirt up and her panties down (in a previous scene, a bedroom scene, she had been wearing some very lacy pink ones.) Then he spanked her bare bottom very hard, telling her that she must not blame herself: to submit to a higher power would make her stronger in the end.

Michael had always wanted to tell a girl that he thought she needed a spanking. Whether or not it had anything to do with Kirsten August, the fact that his request to administer a spanking hadn’t worked out with Heather strangely didn’t deter him from trying it again only a few weeks later, with more success. Having expressed it once, he felt he could own that side of his nature, and although neither of his spanking relationships lasted beyond two dates, it wasn’t because of the spanking, but because Michael didn’t feel like he was spanking the right girl.

After the spankings, in bed, he had done his best to dominate them the way his cock seemed to cry out he should do. One of them had knelt in front of him when he had told her to, but then she had giggled and said, “I don’t think I’m into that, actually.” A session of pleasant but ordinary fucking had ensued. The other had said, when Michael murmured, “I think you should suck my cock now,” “Oh, come on—I may like spanking, but that’s it.” Vanilla sex followed.

Michael wasn’t sure why the three incidents hadn’t left him thinking that he needed to give up his fantasies of power-exchange. If the strange events that led to him meeting Kirsten August hadn’t taken place, perhaps a few more such encounters would have done so—or perhaps they would have sent him looking online for a closer match. At any rate, in the end they left him frustrated, but eager: experienced enough, but far from blasé.

A month after the Academy Awards, which Michael had of course watched like a hawk, treasuring every sight of Kirsten August in her stunning red dress with its nearly transparent lace bodice and its short, stiff skirt that made him wonder again and again what sort of panties she was wearing, her career fell to ruins in a single moment—indeed in a single picture.

In the picture, Kirsten’s crystalline blue eyes were closed, and her long, beautiful hair hung down loosely around her face. She had caught her lower lip between her teeth and her brow was furrowed in her arousal. Down below, she had lowered a pair of lacy white panties to the middle of her thighs and she had run the middle finger of her left hand just inside the pink secrets of her—it made Michael gulp every time he looked—fully waxed pussy.

Her right hand held the phone, next to her perfect little breasts with the pink strawberry nipples that had only been seen on film once, for a brief moment in a shower scene in Dead Right, before she had the negotiating power to dispense with such things. Her left arm, thrust straight down so that she could reach her naughty pussy (how could Michael think of it any other way?) pushed her left breast up a little, as if offering it to the mirror, the camera, and to Michael.

All of it happened entirely in the public eye, too. Headline after headline in Variety. Five separate stories in People, and at a guess two dozen covers of The National Enquirer.

The thought of Kirsten August, and the sight of her on TV, and on magazine covers and billboards, had always used to make him feel buoyant. He knew it was stupid, but she didn’t seem ever to have any real boyfriend, so though he refused even to admit it to himself he probably did cherish a hope somewhere that since they both lived in LA he might meet her someday. He probably even cherished a hope that if he did meet her he would find something to say that would make Kirsten August think, “Hey, that guy’s not famous, but he seems cool—and dominant.”

Kirsten’s name was of course occasionally linked with a costar romantically, but if those relationships ever did really exist they seemed not to last. So Michael had always, even without admitting his foolish hope, found himself thinking of Kirsten August as his special crush. His first thought on seeing the hacked photo had been, “That girl needs a good, sound spanking.” And his second had been, “I’m the man to give it to her.”

Then he had pictured himself discovering her in the bathroom taking naughty pictures of herself. He would order her to lie down on her bed, and he would take off his belt, and give her a lecture about modesty, and propriety, and her career, as he administered a well-deserved, panties-down whipping to the loveliest backside in the film industry—which was exactly what one of the racier film critics had called it after The Haunted Air.

After the whipping, of course, it would be time for Kirsten to learn to please him: she would eagerly suck Michael’s cock in gratitude for the stern lesson he had given her. Then he would tell her to get on her hands and knees. “Why?” Kirsten would say. “I… I’m a virgin.”

But Michael would say, “That’s about to change, sweetheart.” And then he would fuck Kirsten August long and hard in her pussy before he told her that he would finish in the pert little bottom he had whipped. Kirsten would bite her lip anxiously. Then, however, when he told her to show him her asshole, she would reach back and part her cheeks, knowing that Michael’s desires were more important than her reluctance to take his hard cock back there in her tight little anus.

When Kirsten’s career fell apart, though, in a fashion one editorial called “the most amazing self-destruct sequence since the end of Alien,” Michael’s fantasies of domination gave way to a single image that haunted him for weeks. He still wanted to run into Kirsten August in LA—he even admitted to himself that as he drove down Wiltshire Boulevard he was constantly looking to see if he could catch a glimpse not of anyone famous, but specifically of her—but now his fantasy was of giving her elfin little body an enormous hug that would take all the pain and shame she must be feeling away, if only for a few moments.