His Girl, His Rules by Morganna Williams – Sample 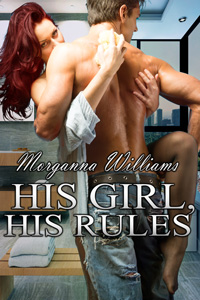 Gabriel studied the sleeping form of his wife, doing his best to ignore the slow beep of the machine recording her heart rate and respiration. Both were slow; too slow.

He would lose her soon. Gabriel squeezed his eyes shut against the burning building behind them; how was he supposed to do this? He was her protector, it was his job to shield her from the rougher sides of life and keep her safe sometimes even from herself.

But he hadn’t been able to protect her from this: cancer… the very name of his enemy filled him with rage. Rage he couldn’t give voice to because she needed him to be calm and loving. They both knew they were at the end of their story.

The thought of saying goodbye to her, his sweet little submissive wife, brought such pain he had to fight to take a breath. It was like the very air in the room seared his lungs. He loved her so much and she was being taken from him.

“Gabriel?” Michelle’s weak voice called to him as her small figure stirred in the bed.

Scrubbing a quick hand over his face, Gabriel made himself smile at her as he sat down in the chair next to her bed. “I’m here, baby girl.”

She reached her small thin hand out to clasp his as he leaned in close. “Gabriel, I wanted to talk to you. I know you don’t want to talk about this, but I need to say it.”

He frowned as he studied the serious expression on her beautiful face. “What is it, love?”

“Gabriel, someday you will fall in love again…” she began.

“You’re right, I don’t want to have this conversation. I should paddle your little bottom for even bringing such a thing up. How could I ever want anyone else when I’ve had you?” he asked sternly.

Michelle smiled and lifted the hand not holding his to stroke the side of his face. “My darling man, you say the sweetest things.”

Gabriel caught her hand in his own and pressed a gentle kiss to her palm. “Enough of such foolish talk.”

A frown puckered between her brows. “It isn’t foolish, darling. You’re a young man and you will love again. You have to!”

“Gabriel, don’t you see, it will be testament to how well we loved each other that you are able to love again. You have too much love inside you to let it die with me. Promise me, Gabriel. Promise!” As tears began to gather in her soft blue eyes, he gave in.

“I promise.” He was barely able to speak past the growing lump in his throat.

Sighing, she relaxed back against her pillows. “Thank you. I wanted to talk more, but I’m so tired.”

“Don’t try to talk anymore, sweet girl. Rest, I’ll be right here,” he told her, stroking the hand in his own as her eyes drifted shut.

As he watched, her breath became more and more shallow, and then without even a small sound to demonstrate it was coming, she left him and was gone.

The alarm on the machine rang shrilly and the hospice nurse, waiting as unobtrusively as possible in a chair in the corner, rose and turned it off before leaving to give Gabriel his privacy.

Gabriel knelt at his wife’s bedside with his head resting on their still joined hands and wept.

Glory Walters grinned as her best friend Nat opened her birthday present. It was a pretty glass bottle fashioned into a hummingbird feeder with a metal holder. When she saw it, Glory had known it would be perfect for Nat’s backyard.

“I love it! Thanks, Glory!” Nat smiled at Glory before moving on to open the rest of her presents.

“So I hear you wrote a book,” Jessica, Nat’s younger sister and also one of her childhood friends, said from the chair beside her. She’d known Nat and Jess since she and Nat were seven and Jess was six. There had been more moments than she could count when she really wanted to gag Jess.

Glory blushed and looked nervously around to see if anyone had heard. “Shhh, I don’t want to talk about this right now.”

“Why? Is it a dirty book?” Jess asked with a raised brow.

“Nat seems to be having a good time,” Glory said in an effort to shift Jessica’s attention.

Glory heaved a heartfelt sigh, and whispered out of the side of her mouth, “Yes, it’s a dirty book, now hush.”

Glory winced and crossed her eyes as she did every time someone said her full name out loud. She loved her mother, but was that the best flower name she could think of? Hyacinth would have been better!

“Shhhhh,” Glory said urgently as people began to look over at them. If her face got any hotter, she would burst into flames.

“I don’t understand. Don’t you have to be dirty before you can write about being dirty?” Jess asked.

Glory shrugged, trying hard to pretend the conversation wasn’t happening and taking a drink of her sweet tea.

“I mean, that would be like me writing about being Asian.”

Glory promptly choked on her drink. Jessica helpfully pounded her on the back until her pipes cleared.

“Thanks.” Glory bit the word out with a glare.

“It was funny, Glory, admit it!” Jess said with an unrepentant grin.

Glory sighed. It had been a funny comment and Jess was just being Jess. “Fine, it was somewhat amusing,” she said grudgingly.

Jessica laughed. “You know you love me, Glory.”

“Yes I do, but sometimes I still think about killing you in your sleep!” she said crossly.

“Ooh, I think about killing Jess in her sleep too!” Nat said, jumping in on the conversation with a grin as she plopped down in the chair next to Glory.

“So what will be your focus this next year?” Glory asked her friend. Every year on their birthdays, they each picked something new to work on or accomplish.

“This year I am going to get that partnership in my firm,” Nat said with determination. “It’s time; I either get the partnership they’ve been dangling for years or I’ll start my own law practice.”

Jessica and Glory both cheered loudly in response to Nat’s words. It was past time the partners in her law firm recognized all of her hard work and all the cases Nat had won for them.

Nat turned her attention back to Glory. “Your birthday is next month; what are you going to do next year?”

Before Glory could say anything, Jessica chimed in, “I think Glory should make finally losing her virginity her goal this year.”

“Jess!” Glory and Nat both hissed at the loudly spoken words and looked around to see if anyone had heard her outburst.

Jessica snorted, “Come on, Glo, you’re about to be thirty-five. It’s time to give it up. You must be the oldest living virgin in history. I mean, seriously, are there cobwebs up there?”

Glory felt her face flame anew, which had always been a constant state around Jess. “Geez, Jess, it’s not like it doesn’t get any action.”

“Battery-operated boyfriends so do not count!” Jess declared.

Nat looked thoughtfully at Glory. “You know, she has a point. Think of it as research for your next book.”

Glory felt all flustered as the focus of both of her friends shifted to her sex life. Were they really talking about this in a crowded restaurant?

“I second that!” Jess said and then called a server over to order a round of tequila shots.

“Um, Glory, I was thinking more along the lines of you sleeping with a guy you were dating. I’m not sure jumping into the deep end without your swimmies is the best idea,” Jess said.

Nat chewed her lower lip worriedly. “Glo, this doesn’t sound like a great plan to me. What if you end up with some hard-case dom who really hurts you?”

“That’s why they have safewords,” Glory said with a sloppy grin. She was really warming to the idea; the thought was bringing delightful tingling warmth to rest at the juncture of her thighs. She would definitely break out her B.O.B. as soon as she got home.