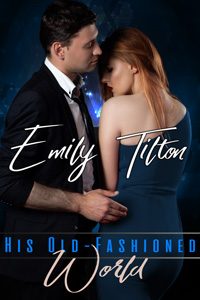 Jenna Burke, MD, left one world and emerged into another without even realizing it. Her not noticing the transition came about as a result mainly of her being distracted by frustration at the apparent failure of the experiment she was carrying out, late in the evening in her lab at the Missouri State Infectious Disease lab. Nor did the fact that her new world resembled her old one in so many respects make the recognition any easier.

She had just placed a sample of a very stubborn virus in the proper position to irradiate it with a stream of focused gamma rays produced by a highly radioactive, but perfectly secure, core of polonium. She went to the proper place at the rear of the device, hoping that having treated the virus with the protein bath first and irradiating it second would give the results that had eluded her for the past four months. Several million dollars of grant, and nothing to show for it except that the approach that had seemed to Jenna and her funders so promising actually had nothing at all to recommend it.

Thanks to the unique atomic structure of the virus, when combined with the mix of proteins with which she had just fed it, Jenna got remarkable results this time, though of an unexpected kind—one she found, at least for an extended period, difficult to detect and even harder to deal with. She pressed the button on the particle accelerator.

She woke up in the hospital. She knew it immediately as the hospital, of course, from the smell alone and before she opened her eyes. Countless hours as an intern, before the research residency at the infectious disease lab, made the identification second nature. Nor did it even feel particularly unusual to be supine in a hospital bed, because she had learned to grab naps in empty beds when she could, just like every other medical student.

The tone in the voice saying, “Miss Burke, are you awake?” and the feeling of having an IV in her arm were different, though. Jenna opened her eyes and looked up into the face of a nurse. “Jenna?” the nurse said. “I’m Deirdre.”

Jenna tried, for a half-panicked and half-desperately controlled moment, to remember why she would be here and what had happened. Had someone knocked her unconscious in her dark lab? Come up from behind with a blackjack or something?

“How?” she asked in a voice that seemed like it hadn’t been used in several hours. The pleasant-faced Deirdre, a middle-aged woman with iron-gray hair waited patiently for her to finish. “How did I… get here?”

“You were found on the floor of a laboratory over at the Center for Infectious Diseases, and they brought you here. You’re in Harkins Hospital—you were admitted around ten p.m. How do you feel?”

Jenna did a quick assessment, tentatively moving limbs and swallowing to see if her stomach felt in working order. Nothing seemed to be obviously wrong. “Fine, I think. I was just lying on the floor of my lab unconscious?”

Deirdre nodded. “So it was your lab. Someone must have missed something, then. The guard who found you didn’t recognize you, and when he looked at your ID it didn’t match up with any of the docs who work there.”

The nurse frowned as if something about this didn’t quite make sense to her. “Well, I’m sure we can get it all sorted out as soon as you can talk to the doctor. We’ll call your husband, too, so he can be there.”

Deirdre’s frown deepened at that, but she nodded with a sympathetic air that Jenna found rather disorienting—as if her declaring herself to be single had made the other woman think that Jenna must also be mentally unstable.

“But you could call… um… my friend Tina for me, I guess. What time is it?”

“Oh, don’t call now. I can wait until I can get the IV out and the doctor discharges me,” Jenna said, trying to put a brave and professional face on it. “I’m parked over at the lab. I can just walk.” Harkins Hospital was across the street from the Infectious Disease facility.

“Alright,” Deirdre said. “But don’t you think Tina’s husband would want to know about what happened? If the two of you are friends I’m sure he looks out for you, too.”

Jenna shook her head, very confused. “Tina’s not married,” she said. Something must be wrong with this woman. Should she tell someone else on the staff here that they had a nurse making vaguely inappropriate comments about single women?

She didn’t want to get Deirdre in trouble, of course, but the strange look the nurse gave her on hearing that Jenna, a single woman, had another single woman as a friend, made Jenna’s skin crawl just a bit. What Deirdre said then, though, only increased the creepiness. “Well, I’m sure both of you will take care of that soon, especially if your friend is as pretty as you are, Dr. Burke. Sit up, now, and I’ll get you some water. I’ll let the doctor know you’re awake, too.”

“Hi,” Jenna said, launching into the businesslike discourse she had mentally prepared in hope of getting out of the hospital as quickly as she could. “Nice to meet you. I don’t want to take any more of your time than you want me to. I’m hoping you can just discharge me, and I’ll walk over to the lab and get my car and go home. I have no idea why I fainted in there, but if I promise to let you know if I have dizzy spells or shortness of breath, can you take the IV out and discharge me? I need to make sure my lab is safe and all my equipment is shut down.”

Dr. Underwood nodded. “I’ll do what I can,” he said, but he said it in a measured tone that indicated he didn’t know how much he could do.

Jenna narrowed her eyes. “What’s the problem? Is there something weird on my panel?”

The tall, brown-haired man in the white coat shook his head. “No, not at all. You seem fine, physically.”

“But…” She left it out there, hanging, for him to finish. Dr. Underwood looked uncomfortable, though, as if he didn’t know how to tell her she had gone crazy without noticing it. Jenna went on, “mentally…” again trailing off, this time with an ironic look on her face to show the doctor that she was taking this bizarre situation all in good fun.

“Well, I don’t know how to tell you this, Dr. Burke, but it doesn’t seem like we can find any record of you working in that lab, or anywhere at the medical center. The lab where you were found is currently vacant, according to the records.”

To her surprise, the doctor gave her a sharp look that Jenna found not so much reproachful as positively admonishing.

“Sorry,” she said. She knew swearing was unprofessional, but she didn’t know many colleagues who didn’t indulge in it from time to time, and the look Dr. Underwood had given her—which Jenna found she could think of only as patriarchal—made her wonder if he was as crazy as Nurse Deirdre. “It’s just that they’re always screwing…”

The warning look gave way to one Jenna found even more distressing: the man had clearly decided, based on her speech patterns, that something had indeed gone wrong with Jenna, mentally. His suddenly very open expression told her that he had decided to humor this patient until he could get a colleague in to give her a psych workup.

“What?” Jenna said, then rushed on, trying to get a grip on the strange situation. She had been in the same clothes—jeans and a cotton sweater—for way too long, and she just wanted to get to the lab, lock it down, and then go home to sleep. “Look, did the guard get my phone? It was on the bench.” She looked around the hospital room to see if she could find it on the counter or the nightstand, to no avail.

“No,” Dr. Underwood said slowly. “They didn’t find… a phone.” Something in the way he pronounced the indefinite article, as if he hadn’t been able to decide whether to say your, gave Jenna another of the confusing moments that frankly had begun to make her wonder whether something had gone wrong upstairs.

Two a.m., and you fainted, for some reason. You’re just feeling out of it.

She almost said fuck, but she thought better of it. See? I’m rational.

“That’s too bad,” she said instead. “Maybe you could call over there and they could pick it up? Unless some vast cyber-conspiracy has taken care of that, too, I’ll be able to show you my credentials, and I can give you Dr. Gerritsen’s home number, and even though she’ll be annoyed if you call her now, she’ll probably forgive you, and me.”

Jenna frowned. “Sylvia Gerritsen? The director of the center?” How could anyone who worked at the medical center not know who Dr. Gerritsen was?

The gentle way the man, who Jenna could see wasn’t a bad guy in any way, spoke now, made what he said even harder to take. “Dr. John Fidelis is the director of the Center for Infectious Diseases.”

She shook her head. “I don’t know who that is.”

“And I don’t know who Dr. Gerritsen is,” Dr. Underwood said, spreading his hands. “There must be a good explanation for this.” He clearly tried hard to keep his skepticism from his body language and his voice, but he didn’t entirely succeed, which only added to the panic that had begun to creep into Jenna’s mind.

She nodded, compressing her lips into a tight line. I feel rational, but what’s happening now indicates that something non-rational may well be going on. I will, however, handle it rationally.

“Okay,” she said. “Okay. Why… um… why don’t we start by you showing me something that says that this Dr. Fidelis is the head of the lab where I think Dr. Gerritsen should be in charge?”

Jenna at least had the mild satisfaction of seeing a surprised look on Dr. Underwood’s face, then, perhaps at the ordered thinking she had just demonstrated. The surprise, to her distress, was replaced quickly by calculation and concern.

“Are you sure that’s a good idea, Dr. Burke?” he asked, with a strange tone to the Doctor that made Jenna think he had decided she wasn’t actually a doctor after all.

Again she fought the impulse to swear. “Yes,” she said, trying very hard to not sound as upset as she felt. “It’s definitely a good idea. I promise not to react violently if you disillusion me.”

He smiled a very ambiguous smile that made Jenna want to scream—half humoring and half patronizing. She was doing her best not to think through the consequences any farther than she had to, if it turned out that she had a false memory of the name of the woman who had hired her for her research residency. She watched with a growing feeling of dread as he tapped at his tablet, the dread increasing as she saw him find what he had expected to find.

He must be thinking of a different facility, Jenna thought desperately, but somehow she knew, before he turned the tablet for her to see, that something had gone seriously wrong with the fabric of her reality: too many little things were adding up.

Missouri State Center for Infectious Diseases. The masthead on the website looking just as it should. But, down below, where Dr. Gerritsen’s name should be: