Learning To Be Little Again by Meredith O’Reilly – Sample 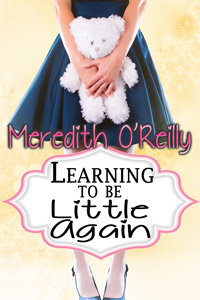 It’s snowing again, I thought as I looked out my kitchen window and finished my measly one orange breakfast. It was New Year’s Day and most people had probably been partying the night before and were still asleep at six forty-five in the morning. Not me. I hadn’t had a peaceful night’s sleep since before… Boyle. Just thinking about that dirt bag made my entire body shake.

Don’t think about him. He’s gone, I tried to tell myself a couple of times to calm the growing panic inside.

I got up from my chair, still watching the snow fall as I threw my orange peel into the garbage can. Sighing, I looked down at the doctor’s card that Mark had left on my kitchen counter the last time he’d been here. It hadn’t been touched since.

I knew that I needed to get help. I knew that I was too thin, that I hadn’t been sleeping well, and that I felt awful. I just couldn’t go and get help, because I was too afraid. I knew that Mark would be really upset with me since I told him before Christmas that I would go to a doctor. But the idea of having to answer medical questions and let a doctor touch me did not appeal to me in the slightest.

I walked out of the kitchen and into the family room. It was nothing special. The walls were a dreary brown, with hand-me down furniture and faded pink carpeting to match. But even though my apartment was small and not much to look at, it was home, my safe haven.

Walking over to the couch, I sat down, clicking the TV on and immediately flipping to the children’s station that always seemed to have my favorite shows. Arthur was on right now. Sinking further into my couch, I began to watch it.

I was laughing at something that Buster said when there was a knock on my door. My clock read seven fifteen.

Who would be stopping by my apartment now, on a holiday? My panic increased tenfold as I realized that I hadn’t been expecting anyone today.

Hesitantly, I got up from the couch and walked over to the front door. Carefully peeking through the peephole, I saw Mark standing there and my shoulders slumped as the fear left me.

Opening the door, I greeted the large man who stood on the other side. “Hi, Mark. Happy New Year.”

“Hi, Juliana. Happy New Year to you too. May I please come in?”

“Sure.” I opened the door more so he could step in. Once he was inside, I closed and locked it, then turned to face him.

Mark was a large man, and that was putting it nicely. He was at least 6’3” and had black hair like mine, but in a crew cut style. He had these shiny gray eyes that could make me feel like he was x-raying me, and he was very muscular, even more so than my friend Samantha’s husband, Jackson. But since he was a cop, Mark had to stay in tip-top shape.

“You haven’t seen a doctor yet, have you?” he asked, his eyes watching my every move.

“No, I haven’t. Would you like some coffee?” I asked, walking past him and heading back into the kitchen. Mark was one of the few people who I felt comfortable around. After all, he was the one who had found me handcuffed to a bed, wearing a used diaper and baby clothes. And he was the one who had taken care of me afterward and let me live with him before I got back on my feet.

“Juliana, what did you promise me the last time that I saw you?” he asked, and even though I wasn’t facing him, I knew he had his arms crossed over his chest and was waiting for my reply.

I sighed and turned around to face him. Guess switching the topic won’t work this time.

“That I would go see a doctor,” I muttered, not looking at him. This was the hard part for me. I could care less if I saw a doctor, but disappointing Mark—that made me feel like a class A jerk.

“Juliana, when are you going to listen to me and go get help? You look worse than you did the last time I saw you.”

“I’m sorry, okay?” I said, giving him my puppy eyes, hoping that would lessen his anger. My puppy eyes seem to work on everyone because they help me look like an innocent little girl. And who could turn down a little girl?

“Puppy eyes are not going to help you in this situation, little girl. You have to take care of yourself. It looks like you’ve dropped even more weight that you desperately needed to keep, and you still have dark circles underneath your eyes.”

“I’m really sorry, okay? I promise I’ll see a doctor soon,” I said, turning to look out at the snow again. Oh, how it must feel to be a snowflake. All you have to do is fly around in the open air. There’s nothing to be afraid of.

“You’ll see one today,” he said, shaking me out of my thoughts.

“What?” I asked incredulously, turning back to face him. He couldn’t be serious. I knew that he wanted me to go, but he had never made me an appointment before… and he wouldn’t now.

“I called in a favor and got you an appointment to see my friend—you know, the one whose card I gave you.”

I began to panic, but then realized he forgot something. “It’s New Year Day. Everything is closed, including doctors’ offices. I have to go back to work tomorrow, so I won’t be free to go any time in the future.” Thinking I’d made my point, I reached for a mug to pour myself some coffee. I really didn’t like coffee and only drank it because I loved how hot it was in the morning, plus the bitter taste reminded me I was still alive.

“You’re right, Juliana. Most doctors’ offices are closed. However, since Robert owns his practice, along with a few other doctors, he can go in whenever he likes, even on holidays. So, I want you to put down your coffee because I know you don’t even like it, go take a shower, and get dressed.”

“Don’t go stomping your foot at me, young lady. Keep up this attitude and I don’t care whether you’re mine or not, I will spank that bottom of yours until it glows brighter than your nightlight,” he said in a low tone that was much scarier than if he’d just shouted at me.

We had a staring contest, and of course, I was the one to look away first. I’m always the one who looks away first. However, when I looked back at him, I felt like I’d been punched in the gut. He looked defeated.

“Juliana, I know we haven’t been friends for long, but I couldn’t just do nothing anymore. You’re wasting away in front of my very own eyes. You’re so thin that I swear someday a gust of wind is going to blow you away. Those dark circles under your eyes make your face look so hollow. You look like death. I had to do this. I had to,” he said.

Guilt washed over me as I walked over and placed my hand on his shoulder. “I’m so sorry, Mark. I… I’m just scared.” The last part of my sentence come out as a whisper.

He looked up at me with those piercing gray eyes. “I know you are and I don’t blame you. That’s why I called my friend. I’ve known him since college, and he would never ever hurt you. And I can be with you the entire time if you want.”

“I promise, Juliana,” he said, wrapping me in a big bear hug.

I pulled away, deciding that I was going to put aside my fears of going to the doctor to make Mark feel better. “I guess I better go and get ready now.”

I turned away, heading for my bathroom when he said, “Wait, there is one other thing about Robert that you should know.”

“What?” I asked, turning to face him.

“You met him at that munch that I brought you to last December, remember?”

I nodded, getting a sinking feeling in my gut that I knew where this was going.

“Well, just to remind you then, he’s into age play. So, if you would feel more comfortable… ummm… acting younger, he’d be okay with that.”

I nodded again, feeling like I’d been punched in the gut for the second time today in a matter of minutes. The last guy I’d acted young in front of had treated me like dirt. What would happen if this guy did the same? I… I couldn’t do that… again.

I turned, heading towards the bathroom again, this time my steps filled with fear.