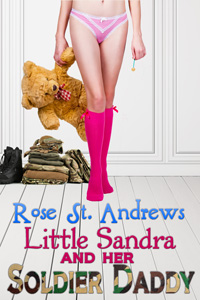 Sandra was feeling good today, and it wasn’t because of the man underneath her. The deal she’d signed with the Canadian firm was the biggest in her career, and would solidify her position with her company. So, to celebrate—and because she preferred to have sex every day—she’d asked the pilot of the small private plane flying her home if he’d like to get into the Mile-High Club.

It had taken all of five seconds to convince him. Men were so easy to control. Get one to think with his cock and he was putty in her hands. For Sandra, it came down to one thing: control, which she demanded in all things.

Naked from the waist down, she worked her fingers under his shirt to rake her fingernails across his chest. Sam (at least she thought that was his name) groaned and heaved his hips, his cock thrusting deeper inside her. Sandra’s reaction was to withdraw her right hand and reach above him to root around in her bag. She wanted her cell phone to see if Malcolm (her boss) had texted her back yet.

She painted a smile on and leaned down closer to him. “And you’re… great,” she replied without emotion.

He wrapped his long arms about her, pulled her close, and planted a sloppy kiss on her lips. She rolled her eyes—behind her closed eyelids—and sighed. Crap, he took my efforts to reach my phone as an invitation for greater closeness.

His hands worked to unbutton her business coat. “Come on, babe, loosen up. Let’s have a look at these puppies; you got a great rack.”

Sandra had learned from experience that men liked that; it tended to improve their performance. In a moment her coat was open, her blouse up, and he’d snaked an arm behind her to unclip her bra.

His hips rocked and bucked higher and harder, as his hands squeezed and kneaded her breasts, which hurt.

She opened her mouth to complain, but suddenly rocked to her right. Pain exploded in her shoulder as the plane swerved about.

Sam sat up. “What the hell is going on?” he snapped, throwing her off of him.

The plane swung hard to the right, going too far as Sam overcompensated. Sandra tried to fix her clothes and get turned around to see what was going on, but the plane’s gyrations were wilder than theirs had been.

“The autopilot got switched off,” he snapped. “How the hell did that…? Sandra, did you bump it with your foot?”

“I’m trying, but the engine is close to stalling. I’ve got to—shit!”

The engine died, the prop stopped spinning, and the plane went into a death dive. Sandra screamed, Sam struggled to restart the engine—while at the same time reciting his Hail Marys—and a view of the black sea filled the windshield.

Sam fumbled for the radio and grabbed the mike. “Mayday, mayday, this is Yankee Whiskey Foxtrot four-two, we are—”

He managed to get the nose of the plane up slightly, and Sandra heaved a small sigh of relief. Now that they were level, maybe he could get the engine going again. But, it was not to be; they were too close to the water, and their time slipped away. The impact was like hitting a brick wall. The plane skidded across the black waters, came to a stop, and then the icy water poured in. Sandra struggled to get out the door before the plane was completely submerged. Her lungs screamed for air.