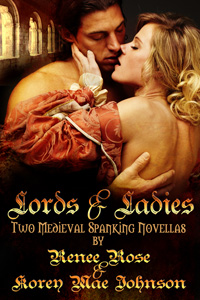 (Sample) Under Siege by Renee Rose

“Set fire to their climbing structure! All flaming arrows on the climbing structure!” Lady Camilla shouted, lighting the oil-dipped rag on the tip of her own arrow before fitting it to her longbow. She shot off arrow after arrow, shouting directions to her people when they looked stalled. Damn her Stonegate neighbors! This was the third attack in a year. With a cry of triumph, she pumped her longbow in the air as she saw one of the posts on their wheeled climbing structure catch fire.

Where, in God’s name, was Sir Aelbert, the knight she’d contracted for the next year? He should have arrived weeks ago, bringing his troops to defend her castle. By our lady! A rope with an iron hook on the end landed next to her and then slid to the tower wall, where it stuck. She cursed, watching a man start to climb across the rope to the tower. Desperate to unhook the anchor-like device before the invader reached the tower, she tugged at the iron, but with his weight on it, it wouldn’t budge. Her dress tangled at her feet and she kicked at it impatiently. If there had been even a moment’s notice, she would have found a boy’s clothing and armor to wear, but as it was, she was out defending her castle in the cursed gown.

“A sword! Cut this rope with a sword!” she cried out. She didn’t carry a sword herself—archery was the only battle skill she’d put to use in the eight years since her husband Lord William had left her alone here whilst he served the King in his holy war. Sir Thomas rushed over and slashed the rope and the would-be invader fell with a cry. Old Sir Thomas, an aged knight who’d served Falconworth for twenty years, was her sole defender now.

She’d been managing until her current knight inherited his father’s title and left her undefended. She’d sent word to Lord Morholt, the Earl of Hareshire and her overlord, to send men to protect her in the meantime, but had had no reply. Not that she was too anxious to involve him. She’d been hiding the fact that her husband was dead for six months now. If he knew, he’d marry her to his lecherous nephew.

She cursed again—an unladylike trait, but gratifying in moments like these. The fire on the enemy’s scaffolding had been extinguished and more of the anchors were landing all around her. The sound of the gate smashing under their battering ram caused a similar shattering of her hope. They were going to fall. This time, despite their best efforts, the castle would fall. Panic welled up in her as she realized all was lost. She could not save her castle or her vassals. She should have taken Father Bernard’s advice and secured a marriage with the neighboring Lord Elwood.

The sound of bugles brought her head up. Another troop was riding in, and they looked ready for attack. Her heart leaped—could it be Sir Aelbert finally arrived? She couldn’t tell, but they certainly were attacking the Stonegate men. She cheered and called a cease-fire to the archers and the wielders of hot oil, lest they injure the wrong party. She, however, fit another arrow in the bowstring. Her aim was better than any man in the land, and if she saw a good shot, she would take it.

Sir Aelbert led his men well—she could detect an order and method to their attack, and the Stonegate men were soon retreating at a run. Sir Aelbert did not follow them, but sat upon his horse and watched them depart, then turned his head and looked straight up at her, as if he’d known she was there watching the entire time. Though she could see nothing of the man—he was in full armor, peering through the slit of a helmet—a shiver of attraction ran through her. His presence was larger than any other man on the field—sending signals of power, leadership, and male virility. Male virility? She shook her head to clear it. She should not be thinking of her new hired knight in such a manner. She broke gazes with her rescuer and turned to hurry down the stairs and give him a proper welcome and thanks.

“We’re saved, Tola!” she called to her younger sister as she traversed the corridor through the upper chambers. “Sir Aelbert has finally arrived and Stonegate tucked his tail and ran!”

“No, Nicklaus. She’s practically your daughter. Our legs only got so strong because she was constantly gripping onto our boots when she was a tot!” Talus reminded his cousin firmly. “She doesn’t deserve this fate. How you could consider handing her over so that she can spread her legs and give up her maidenhood to that wrinkled, toothless old lecher is simply beyond my understanding!”

“Everybody plays their part. I didn’t particularly want to marry Lucretia, and Benedict did his duty by marrying Chastity. Hell, you yourself married Helga, which I thought was the greatest of all hardships at the time. I don’t know how you got her with child in the first place; such a thing would have been far beyond my own abilities, I assure you.” He ignored the look of hurt on Talus’ face. Talus had never deeply loved Helga, and she hadn’t been the loveliest of women—inside or out—but he had been keenly grieved nonetheless when he lost both her and their child in childbirth.

“It’s simply Wenda’s time. I had her wait until she was eighteen—that’s far kinder than I was with my own sister.”

“My ass,” Talus coughed. “You only married off your sister at sixteen because if you hadn’t, Abigail was going to find herself in the midst of a scandal. If I recall correctly, she had quite a healthy child within five months of her marriage… not nine.”

Nicklaus raised an eyebrow but shrugged. “I did have a feeling her intended was sampling the goods before her marriage, but it’s not as if they weren’t already betrothed. It was really only fortune that the match worked in her favor.”

“Of course the man being only twenty-five greatly helped with that,” Talus grumbled, crossing his arms in front of his chest. “You’ve engaged poor Wenda, on the other hand, to a seventy-five-year-old man. She will be the sixth wife he has had! You know, he might die in the marriage bed! How would that make her feel? And if it doesn’t happen on the wedding night, she will wake up to the skin of a dead man resting on her soon enough.” His protest didn’t have quite the effect he wanted; Nicklaus thought it was funny. “May I ask, on her behalf, what that girl has done to upset you so much that you would give her this burden?”

Wenda was notoriously a handful, and as her oldest cousin and her guardian since her parents passed when she was young, Nicklaus had put up with quite a bit over the years. That being said, Talus had always assumed based on Nicklaus’ reactions that every indiscretion merely endeared her to him even more, which was why she’d never been punished for any transgression.

“She hasn’t done anything, I assure you,” he said, his voice still filled with laughter. “I love Wenda dearly; I made this match for her out of my wisdom and for her happiness! Her husband’s estate will be within an hour’s journey of her brother’s. That should please her enough. Besides, who else? You’ve made it clear that you would not take her to wife.”

“Not any more than I would my own daughter,” Talus said, with Nicklaus’ insinuation that he himself was in any way to blame for Wenda’s less-than-desirable match already burning through him. Talus pursed his lips, still wondering why, out of all the men in the land, Nicklaus would look no further than Old Count Kesper to find a suitable husband for Wenda. Suddenly, the reason dawned upon him. “Lucretia put you up to this, didn’t she?” Talus demanded. “She’s the one behind this match, admit it!”

“I am sorry,” Nicklaus said, surprised. “I thought I was talking to my cousin, not the Grand Inquisitor.” He lifted his chin so that his valet could button up to his neck. After a moment of silence, he continued, “It is true that Wenda tends to rub almost everyone she meets the wrong way. My wife is correct in calling her spoiled, and I know that you and I and my father have certainly made her so.”