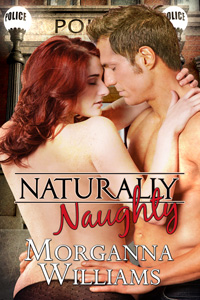 It was a lazy Friday afternoon. I seemed to have many lazy days lately, which must have something to do with being unemployed. I was sitting at my computer working half-heartedly on my serial story and chatting with Hallie and Sebrina in the story site chat room, when suddenly the doorbell and abrupt continuous knocking at the door interrupted me.

Who on earth could it be? Since everyone I knew but me worked, I had no idea. I opened the door to find a policeman standing on my doorstep.

Now this could be a problem.

“Yes, ma’am, are you Shannon Waters?” the uniformed man asked me.

“Do you have some ID with you?” The policeman was turning out to be a man of few words.

“Sure, let me get it.” On my way to my purse it occurred to me that it had been a silly question. Who doesn’t have their ID at home? Of course it also stands to reason, why on earth would you need it at home?

I took him my ID, beginning to be a tad concerned about why he was standing on my porch. I remembered the ticket for my dog without a leash that I had forgotten about, but surely that couldn’t be it. That would just be… well… silly.

He took my ID and studied it for a moment before looking back at me. “Ma’am? Are you aware that there are several warrants out for your arrest?”

“Well, do you recall receiving a citation for your dog being out without a leash?” he asked me.

“Well, yes, but it’s a dog!” I said perhaps a trifle loudly.

“Yes, ma’am, but you failed to take care of the ticket or appear in court. Failure to appear is a separate charge entirely. I’m afraid I’m going to have to take you in,” he told me in stern voice.

Okay… Okay… I yelled… but wouldn’t you?

“Ma’am, you need to calm down. I’ll take you down to the station and then you can arrange to take care of your warrants,” I was informed in a calm tone.

“You’ve got to be kidding me! It’s a dog!!” Then, with the sight of the officer’s face making me realize that I wasn’t going to get out of this, I quickly changed tactics and added, “I’m sorry, officer. I know it’s not your fault. I was just a little shocked and I’ve never been arrested before,” I said contritely.

“I know, ma’am, but I am going to have to take you down to the station,” he said firmly.

“Can’t I call my sister to bring the money here?” I asked hopefully.

I sighed and grabbed my purse before he took a firm hold on my arm and pulled me after him out the door. At least he didn’t cuff me. That would have been mortifying.

He let me lock up the house, escorted me to the police car, and seated me in the back. As he got situated in the front, I let my imagination wander to Officer Landon Bridges. He was the tall handsome policeman who lived two doors down. The object of my unrequited lust and affection, all of course he was totally unaware of. I wondered what would have happened if Landon aka Cutie Cop had come to arrest me. In all of my dreams, Cutie Cop was more than up to the task of taking me firmly in hand.

In this particular fantasy I didn’t calm down; I kept yelling at him about how silly the charges were.

“Okay, ma’am, that’ll be enough of that,” he said sternly before taking hold of my arm and pulling me out onto the porch to cuff my hands behind my back.

“Oh, my god!! You’re arresting me over a stupid dog!! You… you… you dog-faced imbecile!! I’ll have your badge!! I pay my taxes!!” And I do, when I finally remember them. As I was ranting and raving, the officer pulled my resisting body toward the police car.

My neighbors were craning their necks out of their windows to see what all the fuss was about. This was absolutely humiliating!

I began to dig my heels into the soft ground, slowing the dear officer’s progress.

“Ma’am, you are going to have to settle down. That’s enough of that!” he snapped when I kicked at his booted ankle. I simply shot him a glare and continued to scream in his ear and kick at him some more.

No one could have been more shocked than I could when my shorts and panties were suddenly jerked to my knees and I was tossed over the hood of his squad car.

“Noooooo! You can’t do this! It’s police brutality!” I cried, trying to wriggle out of the firm hold he had on me.

He easily held me in place as he began to deliver a series of stinging spanks to my exposed backside.

“Owwwwwwww! Stop! You can’t do this!” I cried as the spanking continued.

Then I looked up and saw Mr. Jenkins from next door heading our way. Thank god! He would stop this atrocity.

“Here, officer, I thought you could use this.” My jaw dropped as I saw that mean old man hand the officer a hairbrush, of all things!

“While you have her in that position, officer, remind her that it’s her civic responsibility to keep her lawn mowed. Her lawn is bringing down the tone of the whole town,” he said, walking off and leaving me to my fate. What a great neighbor he turned out to be.

“Nooooooo!” I screamed once more as the hairbrush began to fall again and again. I yelled. I cried. Still the relentless assault on my poor bottom continued. Finally I began to plead and apologize. I promised to pay my tickets. I promised to never speed again. I promised to mow the yard. I promised that if I dropped a vegetable in the supermarket, I would keep it and not stick it back in the bin!

I sniffed and cried as the officer pulled me to my feet and righted my clothing. He patted me lightly on the shoulder.

“Now, no more tomfoolery, young woman,” he said sternly, helping me into the backseat of the squad car.

As my house faded in the distance I began to bawl like a baby. I was going to the big house. All the way downtown.

It was awful! It was delightful!

A throat clearing next to me brought me out of my little fantasy; the officer was holding the car door open for me. We were at the police station.

Once in the police station/city hall, I was sat down at what must have been the interrogation table. Well, small-town America’s version, anyway.

So it also resembled a break room; it looked better than a cell to me.

They brought me a phone and I called my sister, immediately wailing into the phone, “I’m in jail! That dog ticket… forgot… missed court… warrants… jail… come get meeeeee… please don’t leave me here…” Finally my sister seemed to get the gist of what I was saying and asked to speak to an officer.

I handed over the phone and heard the officer say, “Two hundred forty-five dollars.” Then he nodded and hung up the phone.

The price of my freedom was $245.00. I sighed and prayed my sister would come soon. As I sat staring at the blank walls, the little walkie-talkie thing on the officer’s belt buzzed. He answered and the voice on the other end asked what he wanted to eat.

I perked up; was that Officer Bridges’ voice on the other end of that walkie-talkie?

“Pizza sounds good to me. I have to finish with a subject I have here. She’s got to take care of some warrants. Then I’ll meet you there. Ten-four, good buddy,” he finished.

I sighed. Great. I’ve been reduced to a subject! My life is falling apart around my ears and he wants pizza!

I was never so happy to see anyone in my life as I was to see my sister when she walked in that door. Within seconds the handcuffs were off and I was on my way out. I was eager never to see the inside of that building or that officer again.

My wonderful sister dropped me off at home with a hug and got back to work. Then I remembered.

The officer still had my license!

There was no way around it; I had to have my license back. I grabbed my purse, hopped into my car, and drove around the corner to the town pizza parlor.

Sure enough, there was the lovely squad car. A little tingle ran up my spine at the thought of seeing Cutie Cop.

I took a deep breath and went inside. The officer was sitting eating pizza and sitting across from him was the object of my unbridled affection.

I cautiously approached their table, my face as bright red as the pizza sauce. “Um, officer?”

“Well… umm… you seem to have forgotten to return my license, sir,” I said softly.

The officer immediately blushed. “I must have left it in the squad car,” he said, wiping his face with a napkin and hurrying out the door. Cutie Cop seemed to be taking the whole scene in with great amusement.

I smiled hesitantly at Officer Bridges and then turned to follow the other cop outside.

“Hold on.” Officer Oh So Cute stood up.

“Yes, sir?” I blinked up at him innocently.

“I didn’t come to arrest you because I thought it would be a bit of a conflict, given the way we’ve been eyeing each other the last year or so,” he said matter-of-factly.

“I… I haven’t been eyeing you.” My face grew hotter as I stammered my response.

He raised a brow at me. “Lying is not becoming.”

“I… wh… we… oh… I…” Would this mortifying conversation never end?

“In fact, I’d say lying and ignoring tickets were both pretty naughty. Wouldn’t you?” he asked.

“Ummm… yes?” I was floundering. The man of my dreams was talking to me and I was acting like an idiot.

“You know what happens to naughty young ladies, don’t you?” Officer Bridges asked me in a low tone that turned my legs to butter.

“Yes, they get spanked. I… er… I mean, they uh… go to jail… sometimes.” I wanted to die right there in the middle of the pizza parlor. I’d just said ‘spank’ out loud to Landon Bridges.

“You’re very lucky I didn’t come to arrest you,” he said sternly. “I’d have paddled your backside before taking you in. You should have taken care of that ticket immediately. Instead you wasted time of our department that would have been better spent dealing with real criminals.”

“How does it look for my girl to be misbehaving so publicly?” he asked with a frown.

I felt the telling blush spread down my neck. He was right; I did. I tried to pretend I didn’t, but he eyed me knowingly before leaning down and pressing a quick kiss to my startled lips.

Landon laughed. “I’ll pick you up at seven.”

I smiled and saluted him smartly. “Yes, sir, officer.”

A throat cleared directly behind us, making me jump. I blushed again as I realized our little exchange had been heard by everyone in the pizza parlor.

The other officer nodded and pulled my license from the front pocket of his shirt. “Thank you. Have a nice day, ma’am.”

I was dismissed and I practically ran for the door.

It had been a terribly embarrassing day, but I had a date with Cutie Cop! He’d also made a comment about paddling my backside.

Despite its crappy beginnings, the day was really starting to look up!