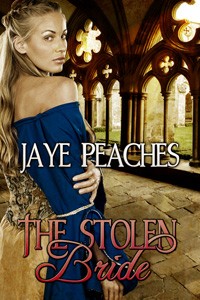 The bell chimed in the distance. An ominous sound. Nadia hitched up her skirts and ran through the meadow, dodged the apple trees in the orchard, and reached the gate in the wall just as the last clang of the bell rang out.

Catching her breath, she eased the latch up and crept through the open doorway. Hugging the shadow of the wall, she edged toward the cloisters. If she tiptoed around it, she might make it to the dormitory. Once there, she planned to feint some malady.

Nadia skidded to a halt a few feet short of the dormitory door. She’d almost made it. She slowly turned, bowed her head, and clasped her hands behind her back. “I’m sorry, sister. I’ve been picking berries for Sister Mary.”

“Have you, child? Show me the berries.” The sister, with her crooked back, walked toward Nadia and held out her gnarled fingers.

Nadia flinched as Sister Agnes approached. “I… left them in the infirmary.”

“Liar! I’ve just been in the infirmary and Sister Mary hasn’t seen you since this morning. Come with me, the Reverend Mother shall hear of this.”

“Sister, please…” The ancient nun firmly grasped Nadia’s elbow. Much to Nadia’s surprise, God had granted the old woman a strong grip. She scuttled alongside the nun, passed the scriptorium and the great oak door leading into the church until they reached the prioress’s private chamber.

Sister Agnes rattled the chain by the door sufficiently loud enough to announce their arrival. Opening the door, she shoved Nadia through the gap and followed behind.

Before a small altar knelt the prioress, her rosary looped over one hand and her lips mouthing a string of Latin words. Nadia’s fate was doubly sealed: interrupting the Reverend Mother at prayer boded badly for her.

Sister Agnes waited in silence until the prioress crossed herself and rose cautiously to her feet. The sun shone through the narrow window, lighting up the gloomy space. No fire burnt in the small hearth, not even on a blustery autumn day. The stone floor was uncovered and the bed positioned against the bare wall. The room smelt of lavender and candle wax and was freezing.

“Sister Agnes,” greeted the prioress and the older nun nodded her head in reply. Then the prioress turned her attention to Nadia and puckered her lips. “Nadia. For what reason have you interrupted my devotions?”

The nun nudged Nadia, pushing her forward and down onto her knees. Nadia reached down to steady herself while maintaining her penitent position.

“This wicked child has missed vespers again. She lied to me, mother. I caught her creeping through the cloisters, intent on returning without anyone noticing.”

“Is this true, Nadia? Did you leave the confines of this priory, the safe haven of this convent?”

Nadia grimaced. She had decided several weeks ago that admitting to small lies was better than having one big one laid bare. She dreaded the Reverend Mother finding out the true reason for her absence. Her prioress would inform her father. It would be disastrous and likely to lead to her exile. Since her mother had died over two years ago, her father had decided he alone could not raise his only daughter. Sons, yes, but a girl on the cusp of adulthood was beyond his parenting abilities. On her sixteenth birthday, he’d sent her to Kirkdale Priory and placed her under the care of the nuns in the hope they would complete her education and instil a pious attitude in the increasingly wayward Nadia.

Sadly, the hardworking sisters of Kirkdale had failed to improve Nadia’s behaviour.

“I regret to inform you, Reverend Mother, I left the walls of this priory to roam amongst the wild flowers. I intended to collect berries for Sister Mary, but I lost myself in quiet contemplation. I confess I missed vespers. I sincerely regret lying to Sister Agnes. I humbly await my penance.”

“You have such a practised contriteness, Nadia. Well practised. Yes, you shall be punished, but not by your own hand, since you can’t be trusted. Yet again, you force me to punish you. Sister Agnes, you may leave us. There is no need for you to witness this.”

“I shall offer prayers for Nadia in the hope she might still learn the error of her ways,” declared the nun. The door creaked as she shut it behind her.

Nadia continued to stare at the hem of the prioress’s habit. Unlike her own grey, unkempt tunic, the prioress’s woollen cloth remained white. Since the prioress preferred a life of prayer and meditation, she only left the convent to visit the local villages. Nadia hated the convent life. Unless she escaped the boundaries of the nunnery, she’d never marry and save herself from the inevitable fate of most postulants: vows and a life of chanting, prayer, and measly food. Each trip she took outside of the convent was a risk worth taking, even if the consequences of being caught were unpleasant.

She peered up from under her wimple. There in the corner was the pail of water and stuffed inside it, the bundle of sticks.

All the postulants and novices had borne the penalty of a thrashing at some point in their time at Kirkdale Priory. But none more so than Nadia, who’d received a substantial proportion of whippings.

Were the punishments worth it? She often asked herself that question while lying on her pallet in the dormitory listening to the gargantuan snores of Sister Phillipa. Yes, surely, it was, because she kept repeating her escapades.

“Move the bench to the middle of the room,” ordered the prioress.

Keeping her head low, Nadia rose and walked over to the bench, which was sufficiently wide enough for her to lie on. She dragged it along the flagstones and located it as requested.

“The birch, child, fetch it.” The prioress pointed at the pail.

Nadia hid her glower. I’m not a child, she wanted to shout, I’m a grown woman!

The first time she had been whipped, not long after her arrival, her knees had quaked at the sight of the bundle. The whittled sticks looked vicious. When she’d picked the birch up, the lightness surprised her. The sticks were no more than twigs bound at one end with twine. Trimmed and cut, each rod was twice the length of a broom’s bristles.

Nadia held the birch just below the knotted twine that bound the sticks together, and watched the water drip off the ends into the pail. The water had softened the sticks, making them bend under pressure. Shaking off the last droplets, she held the birch out to the prioress.

The prioress examined the birch and nodded. “Now, Nadia, lie on the bench.”

A year or so ago, she would have wept, bawled, and pleaded for mercy. Such entreaties had no impact on the prioress because the Reverend Mother believed sins must be atoned for regardless of contriteness. Nadia’s early attempts at persuading the prioress otherwise had fallen on deaf ears.

She was truly at a loss to understand the Reverend Mother. Many times she’d seen the prioress comfort the sick and the dying. She’d witnessed her give alms to the poor, food to the desperate traveller, and respite to a pilgrim. The guest quarters offered shelter to weary journeymen and wealthy nobles, who in return would leave a donation. The prioress was always grateful. Yet, to Nadia, a postulant, one who was destined to live a life of piety and humility, nothing short of perfection was acceptable.

Easing herself down, Nadia hugged the plank of wood. Resting her face to one side, she’d learnt it was best to look out the little window and not at the prioress and the birch. And if the Reverend Mother chose to sermonise, which she frequently did, Nadia would quietly acknowledge her weaknesses: daydreaming, tardiness, and worst of all, lying.

The prioress lifted up the hem of Nadia’s habit and drew it over her waist. The thinner fabric of her underskirt would afford some additional protection. She gripped the legs of the bench tighter, screwed her eyes shut, and waited for the swish of the birch.

The bundle landed on her bottom with a thud. Nadia jerked. It hurt, of course it did. She warned any new arrival at the nunnery not to underestimate the sting of those horrible sticks.

“But, Nadia,” they’d laughed back, “you’re always on that bench. Are you not ignoring your own lesson?”

What little they knew. She bowed to the sisters, obediently went about her duties, and appeared to be performing as a lay sister should during the lengthy services. However, now and again, she had to run away for a while. Deep down, Nadia believed she was the strongest woman in the convent. She had to be, to bear the thrashings and still keep her secret.

Each swoosh of the rods prefaced the thwack on her fiery buttocks. The relentless pace and effort that the prioress put into her whippings was evident in her wheezing exertions. She grunted with each descent of the birch. The rush of air that warned Nadia of the switches approach was brief, almost perceivable and merely encouraged her to brace herself. Her buttocks clenched together and stiffened into hard globes. The reaction gave no relief and only made the pain worse.

“My poor arse,” Nadia muttered to herself.

The cold room had little comfort to offer. The rest of her might feel the iciness, but not the heated flesh of her throbbing rump. To add to the discomfort, the prioress landed a few swipes lower, across her thighs. Her skirts rose higher, nearly uncovering her bare bottom. Thankfully, the prioress wouldn’t countenance such nudity. At least up to now. The rumours about the prioress couldn’t be true, surely? How the priests employed her to judge the readiness of the young women who lived in the villages about Kirkdale. Thank goodness Father William was not at the convent that day. Nadia couldn’t bear the thought of him witnessing her birching. Imagine it, her nearly uncovered behind on view and the sanctimonious weasel leering at her!

She jerked and nearly fell off the bench. An especially hard swat had interrupted her attempt at distraction.

“What else do you do outside these walls, Nadia?” demanded the nun in a breathless rasp.

“Nothing!” Nadia lied, squeezing the tears out of her eyes.

“I know you, child. I know what terrible temptations lie beyond this sanctuary and you have succumbed to them. Confess!” Another sweep of the birch accompanied the shrill command.

Nadia gritted her teeth. It was worth it, she repeated silently. “Nothing,” she gasped. “Please, I beg you, I wandered too far into the meadow. That is all.”

The prioress sighed. “I cannot beat you any more today. I will not be made into a monster. You must live with your sins, Nadia. Go. Prostrate yourself before the altar in the church until supper. Pray for your immortal soul.”

Nadia rose gingerly and allowed her tunic to slip back down. The fabric chafed against her sore bottom. She swallowed her pride and wiped her tears with her sleeve.

“Thank you, mother,” she murmured. She shuffled toward the door, but waited until she was on the other side before clutching her cheeks and releasing an audible cry. “Owww.”

The noise attracted the attention of a passing novice, Agatha. “Again, Nadia?”

She nodded. “And I still have to lie on the cold stone floor of the church for hours.”

Agatha whispered in her ear, “I’ll bring you something to lie on.”

“Somebody has to be,” Agatha winked.