Taken By The Beast by Natasha Knight – Sample 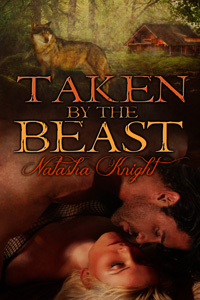 The sound of the bus coming to a halt drew Elijah’s attention. He sat on the minuscule balcony looking out into the dark, unremarkable night; too much light pollution in the dirty city to see the magnificence of the sky above.

Her shoes clicked along the pavement. She was walking faster than usual; something wasn’t right. He couldn’t see her, the bus stop was two blocks away, but he always listened for her around this time.

He closed his eyes and concentrated. Cats fought in the alley below, a man relieved himself along the side of the building. Conversations buzzed from inside the apartment complex. He muted all of those sounds. Standing, he gripped the rail.

Her gasp filled the night and his eyes snapped open. With an angry growl, he launched himself over the balcony, shifting midair, and landed on all fours in a run.

He knew she wouldn’t see him, too dark with only a single street lamp still working. But she must have sensed something because she ran.

She was inside the building when his roar drowned out the scream of the man who would surely have hurt her if he hadn’t intervened.

Kayla looked at her watch. Half past ten. She hit Save on the file she was working on and rubbed her eyes. Her paper was due Friday and she needed an A to keep her average up. Working full time at the diner and taking two accelerated courses at the community college in the evenings left her little time to study. But she was close to the end. One more semester and she’d be a college graduate. Or well on her way to being one with an Associate’s degree for starters. It was something though. At twenty-four, she knew she had a late start. She’d have to work harder than the kids coming out of high school but, well, that was life right now.

She pulled the bedroom door open just as Todd walked through the front door. She stopped dead in her tracks and wished she’d been just a minute later. She’d have stayed in the bedroom all night if she’d heard them come in.

Todd smiled at her, but it was the sort of smile that chilled her, draining the color from her face. He was high on coke. Again. And he wasn’t alone. Four “friends” walked in behind him, bringing with them the stench of dirty man, cigarette smoke, and cheap liquor.

“Hey, babe,” Todd said, walking toward her as the rest of them settled on the couch.

“Hey,” she said, her grip on the doorknob tightening. She wanted to push it closed and lock it, but knew it would only anger him.

Todd’s gaze ran the length of her. She wore a pair of yoga pants and a tank top and wished she had kept her hoodie on.

“Where you goin’, hon? Come say hello to our guests.”

“You’re high again, Todd. Besides, they’re your guests. I have to finish my paper. Just…hang out, have fun. I’ll be quiet.”

One of the guys laughed and another made some remark about being pussy whipped. Todd’s expression changed and this time, Kayla did take that step back and pushed the door closed. But he was stronger than she, even if she was faster. He turned the knob before she could lock it and pushed his way in, coming at her.

“Todd,” she said, knowing she needed to remain calm and keep talking to him. She needed to convince him to leave her alone and if she cowered, he’d only do more damage.

“Are you embarrassing me in front of my friends, Kay?” The way he said her name was more a hiss than an endearment.

“No, I would never. I just have to get a paper done for school and…”

“I have to get a paper done for school,” he mimicked. “What, you think you’re something special? Better than me? Bitch,” he spat, grabbing her laptop.

He took hold of her when she tried to take it from him and held her at arm’s length.

“You’re nothing, Kayla. Never going to be anything. This,” he held up the laptop, “this is nothing but a waste of time.” With that, he threw the laptop across the room and into the wall.

When he let her go, she ran to retrieve it, knowing it was too late. It would be broken and she didn’t have the money to fix it.

“Now get your ass out here and get my friends a drink, bitch.”

She was pushing buttons on the keyboard, but the screen remained dark. All her schoolwork was on that computer and she hadn’t backed up any of it.

Todd mumbled something, stumbling on his way to her. There was nowhere to go when he fisted a handful of her hair and lifted her to her feet.

“Ow!” She grabbed his arm, but was positioned with her back to him and could only follow when he dragged her into the living room. “Let me go! You’re hurting me!” She kicked at him and managed to get him in the shins. He let her go and she backed up. The guys on the couch were laughing now. No one would help her, not that she expected them to.

“Fuckin’ bitch. You’re gonna get what you’ve got comin’ to you.” Todd advanced on her and slapped her face so hard she fell to the floor. “No-good cunt,” he mumbled, straddling her hips and undoing his jeans before yanking at the hem of her pants.

“Stop. Please, Todd. You’re high,” she cried and fought, but was powerless beneath him. He yanked her pants and underwear down. “Please,” she begged.

What happened next didn’t make sense.

Todd was gone. Just like that, his body was off hers and sprawled against the farthest wall. His friends were screaming. She looked at them, then at the beast that had its jaws over Todd’s throat. Todd’s body shook and his head hung at a strange angle. When the beast released him, it turned to her. Blood dripped from its jaws, and all she could do was stare in terror at this animal whose golden eyes she somehow knew.

She backed up, dragging herself along the scratchy carpet, and would have screamed, but no sound would leave her.

One of the guys ran to the front door and the beast turned, lunging at him. The other men scrambled, running to the sliding glass doors of the balcony. But they were on the nineteenth floor, the very top of the building, and the fire escape ladder was broken. Had been since they’d moved in.

Kayla watched the body of the man fall in front of the door, bloody and lifeless. The animal turned to the others and someone pounded on the door. Outside she heard sirens. Police. Thank God, the police would save them. But one glance at the beast told her the police would be able to do nothing against this creature. He was huge, coming to her waist at least. And the sirens didn’t stop, but faded as the cars drove on likely to another call. In this neighborhood, it was the norm.

Whoever was pounding at the door managed to push it open just a little. It was Mr. Tabor from down the hall. He took one glance at the bodies inside and pulled it closed again. She heard him scream at the others to call the police.

It went quiet inside, so all she could hear was the panting of the wolf.

She turned to it. It stood with one thick paw on the back of one of the men. It had left a long, bloody trail beneath the shredded t-shirt. Their eyes met once more and finally, she could make some noise again. She began mumbling something, begging it not to hurt her.

Its gaze remained steady on hers, the expression there one of curiosity but also something else. A sort of knowing, a cool anger. She hugged her knees into her chest and pressed her back to the wall. Her heart was racing, her head spinning. This was unreal, unnatural. But when, before her eyes, the wolf’s body shifted and changed into something else entirely, something…human and familiar, her body went into shut-down mode. Naked, he took a step toward her and she looked at his hands, which were bloodied along with his face, his mouth. She met his eyes, his tiger’s eyes, and shivered anew as she stared up at him, a mumbling, quivering mess.

“I’m not going to hurt you, Kayla,” he said, reaching out a hand to touch her face. She watched in horror as he gently pulled her panties and pants up. “I just want to make sure you’re all right.”

She didn’t feel his fingers on her skin after that, even as he reached to touch her face, because those were the last words she heard before the world went dark.