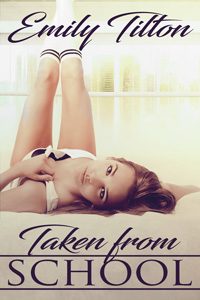 The Owners’ Club took Lauren O’Hara on her eighteenth birthday, after a half-day of classes.

Two men in dark suits stepped out of a limo at the bottom of the school steps and gave her a “Miss O’Hara? Could you come with us, please?” straight out of the movies.

During the half-hour car ride from her affluent suburb into the city, she supposed the men in the limousine, in the dark suits and the dark sunglasses, must belong to the government in some way. She had ridden quietly for ten minutes before she even asked who they were, and if she could see identification.

“Is everything alright?” she asked, a little panicked now.

“Where are we going?”

Lauren took out her phone at that point, but the first man plucked it from her grasp.

“That’s not allowed,” he said.

They brought Lauren to a high-rise apartment building on the Upper East Side, and then up to an apartment door, all in silence, while Lauren grew more and more apprehensive. The apartment door opened to reveal a middle-aged woman in a blue pantsuit. Lauren frowned at the sight, which seemed quite incongruous, but the woman said, “Thank you,” to the men, and then, “Hello, Lauren, please come in,” to her.

The man who had taken her phone now gave it to the woman in the pantsuit, and then closed the door behind Lauren, leaving her alone with the woman, who had looked at Lauren with what had seemed a sympathetic smile and said, “My name is Mrs. Fredericks. What are your email address and password, honey?”

“What?” Lauren asked, blinking in surprise at the very unexpected question.

“If you refuse to tell me your password, Lauren,” Mrs. Fredericks said, seeming to Lauren’s astonishment to have grown suddenly quite impatient, “you will be spanked. Spanking now represents a fact of life for you, just as it does for any of my other girls and for all the girls you will meet who have been taken from school as you have. Jessica, honey, come here, please, and meet your new friend Lauren, so you can help her make a good decision.” She turned and walked off down the hall, leaving Lauren to frown half in confusion and half in alarm, and then to follow in hope of retrieving her phone.

Mrs. Fredericks had entered a gleaming kitchen, through whose other door now burst a person who Lauren supposed must be Jessica. The lovely blond girl in the school uniform of blue plaid skirt, knee socks, and white blouse looked nervously from Lauren to Mrs. Fredericks.

“Jessica, tell Lauren why girls like the two of you get spanked.”

Jessica’s eyes went wide. “Well,” she said, her brow creasing as if she wanted to make sure she spoke in a way that pleased Mrs. Fredericks, “most matrons… um, Mrs. Fredericks and her friends are called matrons, so… they do not punish girls for bad grammar, but… you know, wrinkles in a girl’s blouse or… you know, wearing socks with a hole in the toe. Things like that.”

Lauren’s eyes went wide in alarm, as she tried to figure out whether it could possibly be true.

Mrs. Fredericks said, “Lauren refuses to give me her email password. Do you think you can persuade her to make a better choice, Jessica?”

“The men?” Lauren said in alarm, looking from the tight-lipped matron in her elegant pantsuit to her new friend, the girl she had just met who unaccountably wore the uniform that looked like it had come from a Catholic school. Lauren’s school didn’t have uniforms like that—just a fairly permissive dress code.

She still didn’t have the slightest idea what was happening. “You mean the men from the limo?”

Jessica nodded, casting her eyes back to Mrs. Fredericks, who now wore a very disapproving expression.

“Jessica, tell your new friend what happened when Rachel needed to have the men put her over the arm of the sofa for a paddling,” Mrs. Fredericks said.

Lauren’s eyes went to Jessica’s face, which had turned bright red. “I got spanked, too,” she said.

“Why?” Lauren asked, frightened and shaking her head in confusion.

“As an example.” Jessica’s blue eyes looked again over at Mrs. Fredericks, and Lauren realized from their pleading quality that something had been left out. Mrs. Fredericks looked highly displeased.

“What else, Jessica?” she said.

The pretty girl’s mouth twisted to the side, going very small. “Do I have to, Mrs. Fredericks? Lauren is new, and it is so embarrassing!”

Lauren felt herself frown a little. Why had Jessica said it is instead of it’s? And hadn’t she said do not instead of don’t, earlier?

“Yes, you have to. How are you going to help Lauren learn to be a good girl the way you have gotten to be since then if she does not know the consequences?”

Lauren felt like none of this could really have happened, be happening, but her sinking stomach told her otherwise, and now the dread of the unknown punishment that threatened if she didn’t give up her email password made her feel a little faint. “Tell me,” she whispered to Jessica. “Please.”

Jessica bit her lip. “Enemas,” she whispered back.

Lauren felt her eyes go very wide, and they darted to Mrs. Fredericks.

“And?” the matron demanded.

Now the whisper also became a mumble that sounded like it started with B. The word couldn’t have been what Lauren thought it sounded like, right?

“Speak clearly, Jessica, or you will have a spanking just for your poor elocution,” said Mrs. Fredericks. “And use complete sentences, please, like a young lady worthy of Mr. Graves’ time and money.”

Mr. Graves? What was this place? Why had they brought Lauren here?

Jessica stamped her foot, and her face went even redder. “We had to… you know… give them…”

“Use the proper word for it, Jessica. You know Mr. Graves prefers that.”

The blond girl bit her lip and bowed her head so that her long tresses fell around her face, hiding it.

“Jessica, that is all I can take. You will be spanked, right after Lauren, whether or not I have to summon the men. If you do not want the paddle, you will tell your new friend, in proper language, what happened to you and Rachel after your enemas.”

Jessica gave a little sob and looked up at Lauren, her eyes bright with tears, now. “Rachel and I had to… to fellate the men.”

Lauren heard a little whining sound of alarm come from her throat. Jessica looked over at Mrs. Fredericks imploringly, but the matron tapped her foot on the beautiful tile of the apartment’s kitchen and said, “Go on.”

Jessica’s mouth twisted to one side again, and her chin quivered a little. “They made us swallow,” she finally said.

“Oh, no,” Lauren whispered. “Please.” It wasn’t of course that she had any doubt as to what Jessica and Rachel had had to swallow. It was just that to have it confirmed would let the knowledge of why the men had brought her here grow inside her.

Lauren turned to Mrs. Fredericks. She had suddenly become acutely aware of what she wore: her cute green miniskirt with blue tights, in honor of her birthday (usually she just wore jeans to school), and a nice blue top that matched the tights. She had an even more uncomfortable awareness that underneath the tights she had on the lacy red panties that made her feel a little bit naughty, despite the fact that she had had only one boyfriend, and had only kissed him once. The public schools had made sure she knew about human development and reproduction, and Lauren hadn’t been uninterested in the subject, really, but she had decided to put off thinking about it at least until, well, her eighteenth birthday.

“You will learn more about that very soon,” Mrs. Fredericks said in a tone that clearly meant she would accept no backtalk and no nonsense of any other kind, either. “Right now, you are going to have a spanking, and then you are going to tell me your email password.”

“I’ll… I’ll tell you…” Lauren said, backing away toward the gleaming stainless steel doors of the refrigerator. Why did it seem so appropriate, and make it so much worse, that Mrs. Fredericks had ushered her into the kitchen to have this chat, as she had called it? Lauren had never been spanked at home, of course—corporal punishment was barbaric, her parents had always said, though she had thought once that she had seen in her mother’s eyes, when Lauren had stayed out much too late, a regret at not having ever tried it on Lauren, so out of control had she gotten toward the end of high school. “Just don’t… do that…” Her voice trailed off as she looked into Mrs. Fredericks’ flinty gray eyes.

“You never got the discipline you needed, Lauren, did you?” the woman asked, as if she had read all Lauren’s thoughts.

“I don’t know what you mean!” Lauren wailed. How could they do this? When she gave them her password, what would they do with it?

“I do not mind that you do not understand right now, you little slut, because you will, very soon.”

You little slut. The words hit Lauren like bullets. Mrs. Fredericks’ manner seemed to have changed from knowing, almost sympathetic, persuasion to censorious fury in an instant.

“I’m not!” she protested desperately. “I’ve only ever had one boyfriend, and he only kissed me!” Something about this terrible situation made her feel that Mrs. Fredericks must take it back, say Lauren was a good girl and not a slut.

“Do you think that matters, girl?” Mrs. Fredericks asked scornfully. “Do you think I do not know what happened when you heard that you may have to kneel in front of a man and gratify him immodestly, until you receive what he wishes to give you? What happened down between your pretty thighs?”

“Oh, God,” Lauren whispered. She looked over at Jessica, who had an expression of sympathy on her face so heartrending that Lauren could hardly look at it. She didn’t want sympathy, either, because sympathy would mean that Jessica knew—that this ‘new friend’ couldn’t help acknowledging the truth Mrs. Fredericks had just spoken.

“Do not take the Lord’s name in vain!” said Mrs. Fredericks. “Lauren O’Hara, you will lay yourself over my knee this instant, and have the spanking you deserve.” She went to the high-backed kitchen chair she had pulled away from the table at the beginning of this terrible scene.

“Yes, you will, but that is far from sufficient now. It is high time you experience real discipline, so that Mr. Killington’s investment does not go to waste.”

Weeping in fear, Lauren laid herself over the elegantly pant-suited knee, her auburn hair hanging down around her face. Weeping in shame, she felt Mrs. Fredericks raise her skirt and lower her tights.

“What kind of girl wears panties like these little lacy ones but a slut, Lauren?” came the contralto voice from high above her. “I do not even have to pull them down to give you a thorough taste of old-fashioned discipline, do I?”