Don't Miss
Home / Samples / The Brat, The Bodyguard, and The Bounty Hunter by Loki Renard – Sample

The Brat, The Bodyguard, and The Bounty Hunter by Loki Renard – Sample 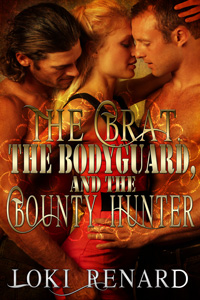 “This is my daughter, Fiona.”

A rotund man with thinning hair and all the affectations of privilege and riches handed a glossy picture to someone who was for all intents and purposes his polar opposite.

Tom Waters was the man the rich and powerful called when they wanted something handled discreetly and effectively. He was tall where Lord Fayrefield was short. He was hard instead of paunchy and soft, with a rigid body forged from a lifetime of hard military service. He wasn’t in the military anymore, however. He’d been a free agent for ten years, a mercenary, a bounty hunter, a jack of all martial trades—and a handsome one at that. The hard lines of his square chin, straight nose and wide jaw were all in masculine balance, topped by thick blond hair which managed to have a wave even though it was cut relatively short. He used his thick, strong fingers to push a stray couple of strands out of his cobalt eyes as he perused the picture.

The young woman depicted was prettier than a speckled puppy in a red wagon, and much more impeccably groomed. She had a slightly haughty expression on her face, though it could simply have been a product of her aristocratic bone structure. High cheekbones and wide, doe like eyes suggested both sophistication and innocence in equal amounts. She had masses of curling white-blonde hair which reminded him of a pageant queen, though in her case it seemed to be natural. Her eyes were quite curious, one green, one blue. A case of heterochromia—and a cute one at that.

“Twenty-four,” Lord Fayrefield droned. “Old enough to be married and settled with a brood of her own, but she won’t have that. Fiona thinks she is above common decency. She’s been running away since she was fourteen, you know.”

Tom was not surprised. Even he was starting to feel stifled and he’d only been in the house fifteen minutes. Fayrefield Manor was a grossly oversized building, built after the fashion of an English manor house, but in the middle of rural Massachusetts. Lord Fayrefield’s office was rich in mahogany and leather, a large space that felt small.

“You’d like me to retrieve Miss Fayrefield?” Tom quirked a sandy brow at his potential client.

“I would,” Lord Fayrefield said. “She has duties to uphold.”

“What you’re asking for is a kidnapping,” Tom said. “Kidnapping’s not in my line of work.”

Lord Fayrefield’s eyes became shifty. “I was informed that you were the man to contact to deal with difficult situations.”

“Your daughter is 24 years old. Independent. I can’t go drag her home to daddy without a good reason.”

Lord Fayrefield’s lips thinned. He clearly did not like explaining himself. “My daughter is wanted by the police. If I do not find her first, she will end up being charged with numerous tax related crimes. I have lawyers, very good lawyers, but they are ineffective without Fiona.”

“There are warrants out for her arrest?”

“Several,” Lord Fayrefield asserted. “Fiona has never had much regard for my rules, or for anyone else’s.”

That was slightly different. Tom asked to see the warrants and was presented with a file as thick as his thumb. There were dozens of warrants and citations in it, some for small matters like public intoxication, others for more serious crimes, like tax evasion.

“She has the IRS on her? They don’t tend to play. I’m surprised they haven’t caught up with her already.”

“Fiona is not a high priority at this point. She’s a small part of a wider case. If we have the opportunity to take her in and bail her out, she need never see the inside of a court room. If she insists on running away and ignoring my instructions, she may very well end up taking responsibility for these charges.”

Tom didn’t trust the man one bit, but he had the money and the paperwork held up.

“Is there anything else I need to know?”

“Fiona has a personal bodyguard in her employ. He has done an excellent job of keeping her out of the way, though I do not imagine a man of your skill set will find him difficult to best.”

Another photograph was passed over and Tom found himself looking into the oddly familiar face of a younger man wearing the uniform of the Marines. Clean shaven, narrow faced and determined, he stared out of the picture with an intelligent granite gaze.

“Harris Kingsley. Ex-military, as you can see.”

“Doesn’t seem the type to abet a criminal.”

“He is doing the job he was employed to do. She retained his services after deciding to go on the run. It is possible that he is not entirely aware of her legal situation. The challenge lies in getting close enough to him to tell him. Fiona has intercepted all attempts at communication thus far. My daughter is not a stupid woman. She can be very cunning when she needs to be,” Lord Fayrefield sighed.

A wily target protected by a couple hundred pounds of highly trained muscle. It wasn’t Tom’s usual job, but he was warming up to it.