The Code of the West by Kelly Dawson – Sample 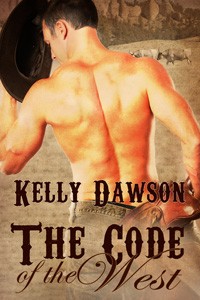 The sound of hoof beats outside startled Jedda-Lyn Cross out of her reverie and she put down her sewing. Who on earth would it be at this hour? Since their parents had died two years ago in a buggy accident, no one ever visited their tiny ranch on the edge of a tiny Texas town. People had, once, but her alcoholic brother Neil never made visitors welcome, he was always drinking and rude. And it wouldn’t be him—he wouldn’t be home for another hour, at least. Standing up, she looked out the small window and groaned. The man dismounting from his fine gray gelding was the last person she wanted to see. But, always polite, she rose to her feet and opened the door to let the man into her house.

“What can I do for you, Mr. Robinson?” she asked, not wanting to appear rude, but really not wanting to welcome him in, either. She’d be in trouble with her brother if she sent him away, but she certainly didn’t want him to stay. It would be better if he left of his own accord, then she wouldn’t have to face her brother’s wrath.

“I haven’t called you Cal yet, Mr. Robinson, why on earth would I start now?”

The man standing in her kitchen looked her up and down with a sleazy eye. “We’ve known each other for a long time, Jedda-Lyn; I’d hoped we could move past the formal stage and treat each other as friends. Companions.”

Jedda-Lyn snorted. “I don’t think so, Mr. Robinson. Look, Neil’s not home. He might be a while yet. Why don’t you come back later?” Cal Robinson was the last person she wanted to be alone with. He might be her brother’s best friend, but she didn’t like him and she didn’t trust him. Many of the local girls thought him handsome, but she didn’t. She knew him too well for that. She knew that his smile and charm could be turned on and off at will. She also knew his reputation: he was known about town as being handy with his fists, and he seemed to enjoy brutalizing his women. Her brother’s best friend or not, she had no desire to put up with him any more than she absolutely had to.

“I think I’ll stay, if you don’t mind,” Cal said, leaning casually against the door frame.

“I do mind, actually,” Jedda-Lyn told him quite forcefully.

“We will never be friends, Mr. Robinson. Please leave.”

“Maybe we could be more than friends, Miss Cross?” Cal advanced toward her, a menacing look on his face. The man looked positively evil. Jedda-Lyn shuddered as she took a step backwards, only to find the rough edge of the wooden kitchen counter pressing into her back. She was trapped. She cringed as he reached out for her and touched her face with a dirty finger. The skin on his hands was rough and scratchy and when she tried to pull away from him he laughed.

She was backed into the corner of the kitchen pressed up against the cupboards, and Cal held her there with his body while he fumbled with his pants. She knew what he was about to do, but she was powerless to stop him. Screaming would be pointless—there was no one around to hear her. Desperately she fought him with hands and feet, kicking him, scratching at his face with her long fingernails, trying to get away. But he was too strong. She saw him draw back his fist and although she tried to turn her face away, the blow landed squarely, solidly, on the side of her face. Momentarily everything went black, but she didn’t pass out completely. The room was spinning, and there was a searing pain in her jaw, but she could still see. She was still conscious. She was aware of every movement that hateful man made; she was aware of everything he was doing to her, as he tried to wrestle with her skirts and petticoats. Dazed, she lay back against the kitchen counter while he tried to force himself on her, unable to summon any more energy to resist him.

“Get off my sister!” The order came low and clear from the doorway and the anger in her brother’s voice was unmistakable.

Quickly, Cal moved off her and she crumpled to the floor, sobbing. All she could think of was how glad she was that Neil had showed up when he did, before Cal had the chance to finish what he’d started.

“Get up,” Neil ordered her, his voice still harsh.

With great effort, she struggled to her feet, righting her clothing as she did so. The triumphant smirk on Cal’s face as he stood there in her kitchen, staring at her possessively, made her want to vomit.

“Don’t you have a shred of decency in you?” Neil was yelling at her. “Doing that right here in the kitchen where anyone could have walked in on you?” He slammed his fist down on the counter next to where she stood and she jumped.

“Do you think I did that by choice?” she asked him incredulously.

“Well, I didn’t see you resisting,” he retorted.

“Before he hit me I was resisting!” she yelled, holding her sore jaw. Blood trickled from the corner of her mouth, out between her fingers, so she grabbed the tea towel off the stove and gently pressed it to her face. She could see Neil’s penetrating gaze switching between Cal, still looking smug, and herself; it was obvious he didn’t know what to believe.

“You’ll have to marry her,” Neil told Cal.

“What do you mean?” Neil asked. “Of course you will!” he affirmed. “No one else is going to want you now.”

“I don’t care!” she yelled. “But I won’t be marrying him.” Turning her back to the men, she leaned against the cupboards and tried to stop shaking. When she turned around again, she was alone. Her solace didn’t last long though—within minutes she heard heavy footsteps outside, then Neil stood before her in the kitchen.

“Cal will marry you next week.”

“I’m not marrying Mr. Robinson. Stop trying to make me!”

“You don’t have a choice.” Neil’s voice sounded so hard and cold. She’d never been close to her brother, and their parents’ death had only served to push them further apart, but she had thought he at least cared a little bit. His tone right now proved otherwise.

“He forced himself on me! I’m going to the sheriff,” she declared.

“The sheriff won’t believe you. Don’t be ridiculous, Jedda-Lyn. The Robinsons are the most powerful family in town—hell, they own most of the town! They control the sheriff. There’s no way the sheriff is going to believe you.”

Jedda-Lyn sighed. Neil was right. He often was right, when he was sober. The trouble was his sober moments were rare. “Do you believe me?” she asked him.

He paced back and forth across the kitchen a few times, then stopped and looked down at the floor. “I don’t know,” he mumbled. Then he straightened, and his expression brightened. “It will be good being married to Cal, you’ll see. Think of the money, Jedda-Lyn! You’ll be able to have whatever you want! I’ll be able to get this place paying again…”

“You’ll have someone to pay for your drinking habit, you mean,” she accused him angrily. Thanks to Neil’s addiction, the little ranch was mortgaged to the hilt—if something wasn’t done soon, the bank would foreclose and they’d both be homeless. But surely marrying Mr. Robinson wasn’t the answer. No, there must be another way…

“No.” She was determined. She was not marrying Cal Robinson! “I’m not marrying him. He treats his women roughly, you know he does!”

“Only whores. Everyone treats whores roughly,” Neil defended him.

“No, Neil. Not just whores. He won’t take care of me and you know it. I’m not marrying him and there’s nothing you can do to make me!”

“Jedda-Lyn, you have to!” Neil shouted.

Reaching up to the high shelf where the whisky was, she slammed it down on the kitchen table, placing two glasses beside it. Maybe a drink would help ease the throbbing pain in her head. The pain stretched right across her temples, down the side of her face, and culminated in a climax of pulsing agony in her jaw where Cal had slugged her. Already, her jaw was swollen and it hurt to open her mouth, but she only had to open it enough to have a few small sips. Pulling the crystal stopper from the decanter, she filled both glasses.

“Broaden your mind, brother—come and have a drink.”

She’d lain awake in bed for hours that night, trying to decide what to do. She would have to leave—she knew that much. By tomorrow the whole town would know that she was Cal’s betrothed. If she stayed, and refused to marry him, he would tell everyone that he’d ruined her, and that would be it. She’d be left on the shelf. But what could she do? She could run away… but where would she go? The stagecoach left every day, but she had no money for a ticket, and she didn’t know anyone she could borrow money off. Neil’s drinking habit had made sure of that. She felt utterly hopeless. Heartbroken, she eventually cried herself to sleep long after Neil had drunk himself into a stupor at the kitchen table.

She woke up to the sound of Neil snoring and immediately she remembered her predicament. Hopelessness threatened to overwhelm her again, and then she remembered: there was a large cattle drive due to leave town in just a few hours, heading north on the Sedalia trail, led by a highly respected trail boss by the name of Weston Jordan. This was her chance! Working for Mr. Jordan, she would be safe, out of the clutches of Neil and Mr. Robinson, and she’d be earning a wage. By the time they got to Sedalia, Missouri, she would have enough money to make a fresh start somewhere new and leave her Texas life behind. It wasn’t really as far-fetched as it sounded—all she had to do was convince Mr. Jordan she was a boy, and that should be easy enough. She’d spent her entire life on their small ranch so she was used to steers, and she could ride, rope, and brand—if she made a convincing enough boy and managed to get the job, she would make a fine drover. As long as Mr. Jordan agreed to give her a job… if he wouldn’t hire her, she didn’t know what she would do.