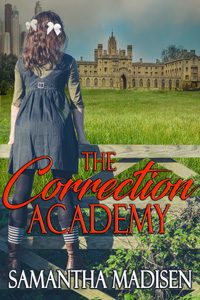 Portia watched, trembling as another onlooker stepped up onto the platform. She averted her eyes as he drew close. She heard the guard hand him the paddle.

Though she’d felt the sting of the paddle many times since being captured, the pain of it paled in comparison to the hurt she carried inside. In a way it almost brought relief from the memory of being left behind by her family as they’d boarded the escape craft.

“Ye can take two swats to each cheek but that’s it!” the guard barked.

“Everybody gets two! Can’t have her too sore fer everybody else, that’s why! Now hurry up. Doc’s gonna be here any minute to take her back to the Academy.”

That word. Ever since the revolution had ended, at least in Capital City, Portia had lived in fear of that word and the place it stood for.

A cool breeze blew down the street, making Portia shiver and reminding her again about how naked she was. She glanced at the dozens of eyes that stood watching as the man with the paddle took aim at her rear. She bit down on her lower lip in anticipation of the pain.

The first swat fell on her bare left bottom cheek.

Portia turned her eyes from the crowd. It was humiliating enough having to stand naked at the spanking pole. She would not give them the pleasure of seeing her cry.

The next sting of the paddle raced from her bottom up her spine. Portia cringed and squirmed even as she readied herself for another blow to land.

When it did, she couldn’t help the muffled yelp that escaped from her mouth. While the guard always took care not to let the spanker get too rough, there was no way to really measure the force of each blow. Some landed harder than others. Portia closed her eyes, hoping that doing so might make everything just go away.

A burning pain seared her bottom. It stung through her whole body at each fierce smack of the reconciliation paddle. Portia’s mind drifted to how unfair it all was. It wasn’t her fault that she had been born an Elite! Why did she have to suffer through this now?

“Ah!” Portia cried out. Tears stung her eyes and rolled down her cheeks. Her bottom was burning from the fierce spanking. She squeezed her eyes shut tight. But there was a third, much more intimate reason that made a swell of embarrassment and shame rise from her insides. Some of the people watching the spanking were just a few feet from her exposed pussy. She knew that some of them, particularly the men, had to be watching it.

That meant that with every smack, they could see what she felt. The warm wetness coming from her pussy and running down her leg.

The crowd behind her quieted at the deep sound of the man’s voice.

“What?” the guard barked from beside her.

“Her wetness has come in.”

Another hush. Portia’s face burned red as she could practically feel the entire crowd leaning closer and staring at her most intimate place.

“She likes this?” another voice asked.

The silence was broken by the guttural sound of the guard chuckling beside her. Portia turned her head. She could see him leering at her bottom with a sneer. “Yep! She certainly does!” he whooped.

The crowd behind her broke out into a laugh.

Portia yelped as the large man’s giant hand slammed into her rear. Then, she felt the tips of two fingers on her wet sex. “No!” she cried, though the feeling had sent a bolt of pleasure up her spine.

“Hey! That’s not allowed!” a voice cried out.

“Yeah, yeah,” the guard grumbled beside her. He pulled his hand away.

Portia saw him lift it to his nose and sniff. One corner of his mouth turned up. Portia shuddered and looked away as the guard began to laugh.

Dr. Daniel Damas was seated at his desk, poring over the tablet he’d just been handed. He barely heard his assistant enter the room.

“Doctor, there is an Elite ready to be harvested at one of the spanking poles in the old quadrant.”

“Oh?” Daniel frowned. “I thought all of the Elites had already been rounded up. In Capital City, at least?”

“This was one was holed up in a garage somewhere, from what I’m told.”

Daniel nodded. “Is she in the database already?”

Daniel swiped into a new screen on his tablet. He punched out a few commands with his finger and brought up the screen containing the enrollment queue. It had been so long since they’d had a new arrival he’d almost forgotten what it looked like. Now, instead of the green background he’d last seen, there was a yellow box with a name and a small picture.

“I thought so too,” Simon replied. “Who knows? Maybe she was left behind? I’m sure we’ll get the story out of her once she’s here.”

Daniel shook his head. “Alright. You’ll go out and get her then?”

“Good. Any news from the front?”

“Nothing new. The Elite guard is still holding a line in the foothills west of Capital City. Last I heard their supply lines had been cut off. It seems like only a matter of time before they fall.”

Daniel nodded. “So things will get busy here at the Academy again.”

Daniel thought about that for a moment. He’d enjoyed the brief respite from all of the women who had flooded into the Academy after the Elites were driven out of Capital City. However, it had been a little too quiet lately for his liking.

“Will that be all, Doctor?”

Daniel looked up. He’d forgotten Simon was still waiting to be dismissed. “I’m sorry, Simon. Yes, of course. I’ll see you when you get back.”

Simon smiled and disappeared into the hall.

Daniel looked down again. He was about to close the enrollment queue when he saw the time. Almost lunch. He reached for the apple sitting on the edge of his desk and pushed the little yellow button with the girl’s name.

He felt a strange energy pulse through him as he stared at her picture, now enlarged on the screen. She was the picture of innocence. Her hair was so blond it was almost white. The wide curls careened down both sides of her cheeks, coming to rest on her shoulders. Her azure eyes were wide and curious. She was not dainty but had a well set frame. He glanced past her ample chest, though his cock hardened at the sight of it. Her waist tucked in the perfect proportion to her shoulders, then flared out into generous hips.

It was not just her physique that struck him, though. There was something… incredibly enticing about the way she was looking into the camera. As if she was daring the viewer to look back. For the longest time, he couldn’t tear his eyes away. Then a thought struck him.

He put the tablet down and pushed a button on his desk. After a few moments, Simon’s voice came back. “Yes, Doctor?”

“Have you left yet?” Daniel asked.

“Pull around front then, please. I’d like to go get her myself.”

Still humming with the energy he’d felt the first time he laid eyes on her, Daniel stood up and walked out the door.