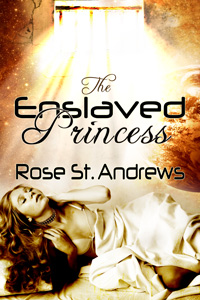 Naomi truly loved her life. Not only was she a princess, but her daddy was king of Meris, a planet rich in natural resources and ideally situated on the main commerce routes. They were only fifty light-years from the Galactic Hub, the largest cluster of inhabited worlds. Somewhere among those planets was the ‘Mother World,’ the birthplace of humans. Her tutor, Isaac, had tried to teach her about it, and other things, but she never paid any attention. Why should she? She was a princess; such things were beneath her.

Of course, that’s why Paula, her handmaiden, was before her now. Paula was also her whipping girl, which meant she took all her punishments. That meant she didn’t sit much. In fact, over the last several years, she’d been spanked and paddled more times than Naomi could remember. Now that they were both almost twenty-one, she had to wonder how much longer her daddy would want to keep Paula around. Naomi made a mental note to mention it to him one of these days.

Isaac stood in front of Naomi, paddle in hand, and glared at her. “Your highness, be reasonable. Poor Paula just got paddled yesterday for your actions at the royal ball. Now, just because you didn’t do your homework, she’s to get it again? It isn’t fair.”

Naomi, reclining on her huge fluffy couch, yawned and scratched her nose. “What of it? Really, Isaac, why must you be such a bore? I have so little in my life that pleases me, so little to amuse me. Getting to watch little Paula get smacked is at least something to fill up the tedium of my existence. Now do it!”

“It’s all right,” she said softly.

“There, you see. Paula knows her place,” Naomi snapped. “Do you, little man?”

Isaac fumed, grinding his teeth. Naomi laughed. She did so love lording her power over her underlings, especially Isaac and Paula. They were two of a kind: tall, intelligent, passionate about life, everything Naomi wasn’t. That was yet another reason she liked to pick on them, why she always called them little, despite them towering over her. So, snuggling down in her warm sofa, she held out a hand to her other handmaiden, who filled it with grapes.

Paula knew what to do. Bending over, she put her hands on her knees, and stood so she was facing sideways to Naomi. That way she’d get the best view. As a member of the royal household, Paula had nice clothes: red silk blouse and gold shimmering shorts. Yet, they would afford her little in the way of padding. Isaac took up his position next to Paula and facing Naomi, and took aim at the target. Paula cringed, her muscles tightening, and Naomi grinned. She could see the lingering bruises from her most recent punishment.

Smack! Paula stifled a yelp and lurched forward. Naomi tingled between her legs, dropped her grapes, and seized the cushion under her with both hands.

Oh, what a rush! Why does this always enflame me? Oh well, I’m sure once daddy finds me a husband and I learn about sex, these feelings will go away.

Crack, the paddle landed again, breaking Naomi out of her daydream. Paula let out a squeak. Naomi frowned. She liked it so much better when Paula cried out. Naomi merely sat back and waited. She knew from experience that she’d break soon enough. Isaac struck again and again, landing one hard swat after another. It only took eight for Paula to give voice to her pain. Number fifteen made her truly howl, and she was sobbing nicely long before the last of the two dozen had been delivered.

He stood straight and tall, looking down at Naomi, despite her being on a raised dais. “Satisfied, your highness?”

She scowled slightly, not liking the hint of defiance in his voice. “It was… sufficient. Paula, you may go. Isaac, I’m bored with my lessons, and want nothing more to do with them for today. You are dismissed.”

Paula stood, struggling to hold back her tears, and bowed. “Th-thank you, highness.”

The two then backed away from her, crossing the large round room like that until they were close to the tall and massive oaken doors. They turned and he helped Paula out of the room. Naomi punched the silken pillow under her right arm. Isaac hadn’t snapped at her. She had so hoped to goad him into an outburst, and thus given her an excuse to have him whipped. He was strong and it appeared more was needed to break him.

Oh, what does it matter? Time enough for that later. I think I’ll watch a movie.

Getting to her feet, she dismissed her handmaiden with a limp wave of her hand, and moved to the lovely tiled floor. She found it so pretty, black and white in an alternate pattern, and she loved to watch the servants polish it. Naomi crossed to the entertainment system and found a movie. It was a pleasant enough diversion for the rest of the afternoon.

When evening came, she sat down to dinner with her parents (King Oberon and Queen Regina) in the minor dining hall. It was minor in name only, as the table could easily seat twenty. This night, besides her and her three sisters and their husbands, a couple of daddy’s advisors were there, right next to him. They droned on about something silly.

“Your majesty, what about the reports of a rebel fleet massing out among the asteroid belt?” his grand vizier said.

Daddy snorted. “They’re nothing to be concerned about. Soon their battle plans will be in our possession, and the rebellion will be crushed.”

“Sire, I would never dare question your judgment, but I feel I should warn you about the difference between confidence and hubris.”

Reaching for his golden goblet of wine with his right hand, the king waved the great oaf away with his left. “I’m bored now. You have made your report and recommendations, enough is sufficient. You may leave, and we will meet at the command center tomorrow. I have more important matters to consider.”

“More important? Sire, no disrespect intended, but what could be more important than the safety of your kingdom?”

Daddy smiled at her. “Naomi will be twenty-one in a month. There is not only her party to plan, but suitors to line up. I have kept her safe and pure long enough.”

The vizier rose and bowed to daddy. “Oh, of course, sire. I shall see you tomorrow.”

As he backed out of the room, Naomi smiled and leaned toward daddy and mommy. Now they were talking about something she actually wanted to hear about: her. The rest of dinner was spent discussing her upcoming party, and she was very excited. It was going to be huge, cost a fortune, but what did she care, and every eligible bachelor worthy of consideration would be there. Just the thought of finally getting close to a man made her body react in ways she didn’t understand.

But oh, I sooo want to find out!

By the time dinner was done, Naomi was not only floating on air, but gloating, as all her sisters were practically spitting flames of jealousy at her. Her party was going to be at least twice as big as any of theirs had been. It was to be expected. She was the baby of the family and her parents made no secret of the fact that she was their favorite.

After dinner, they went out into the garden and danced while the servants played music, and that night Naomi went to bed with the biggest grin on her face and fell asleep within seconds.

However, she woke with a scream. Her nice big bed with its soft billowy mattress had been practically thrown across the room. Tumbling out of it, she rolled across the plush carpet and sat up.

“What is going on here? Is there an earthquake?” she called out.

The sounds of laser blasts and explosions were her only answer. She got to her feet and raced toward the door, pausing only to throw on her silk robe. After all, there was no way she was letting mere servants see her in only her delicate lace and diamond pajamas. Before she could reach for the doorknob, both doors rattled and shook. She froze and turned to the comm-unit.

“Paula, Isaac, Gillian, report. What is going on out there?”

Static was the reply.

“Mommy, daddy, my servants have left their posts. What’s happening?”

“Naomi, get to the heli-pad,” her mother cried. “The rebels have—”

The line went dead, an explosion rocked the building, and Naomi was thrown off of her feet. Landing on her pert bottom, she let out a yelp, and then screamed when the doors split right down the middle. She got on her hands and knees and scurried away from them. A moment later, they fell like trees being cut down. Naomi spun about to sit on the floor and look toward them. It took a moment for the smoke to clear, and then she gasped at the sight before her.

Laughter echoed around him. There was a gang of gruff men behind him, and all of them were armed.