The Laird and the Sassenach by Ashe Barker – Sample 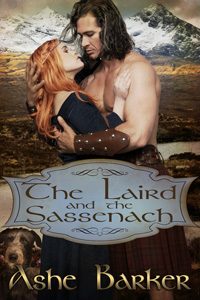 “Lady Eleanor is here, from Duncleit.”

Roselyn shot her mother a glance but did not answer. There was no need, they both understood clearly enough the implications. Lady Margaret, mistress of Mortain Castle, was dying.

“I wonder how long Lady Eleanor will be staying? Until the end, I daresay…”

Roselyn reached for her mother’s slender hand. Even at just ten summers the child well understood her mama’s sadness at the imminent loss of her lifelong friend. Roselyn, too, would miss the gentle lady with the ready smile and fondness for sweetmeats which she would distribute freely to her smaller guests.

“Shall we see her?” Roselyn harboured mixed feelings on this. Lady Margaret bore little resemblance of late to the gracious chatelaine who used to stride through her domain with such confidence, such quiet authority. Her illness had taken hold swiftly and her descent had been rapid. She had plummeted from rude health to become the shell of a woman who now lay still and fragile in the great master chamber.

The entire episode had terrified Roselyn. Lady Margaret’s rapid decline undermined the child’s previously unshaken belief in the immortality of herself and those around her. Even the death of her own father just two years earlier had not affected Roselyn so deeply, though of course he had been a virtual stranger to his tiny daughter.

Her mother offered her a wan smile. “You may remain downstairs in the hall if you wish. I expect Joan will be here with her mother and she will no doubt be pleased to see you.”

Roselyn hoped so, though she did not share her mother’s certainty. In truth, she barely knew Joan McGregor, daughter of Lady Eleanor. The two girls saw each other rarely since Joan’s home lay far away to the north, in the Highlands of Scotland. Even when Joan did visit Mortain and their paths might cross, Roselyn found it near enough impossible to decipher the other girl’s pronounced Highland brogue. Despite this it would be pleasant, she supposed, to spend time with her, though on balance she wished to say her farewells to Lady Margaret also.

“May I come to Lady Margaret’s chamber with you? Just for a few moments?”

“Of course. You may remain as long as you wish. I believe that I might stay until… Until…”

Lady Eleanor did not finish. There was no need.

Roselyn regarded her occasional friend with some surprise. How could Joan expect the mood at Mortain to be otherwise when all here loved the lady who was not expected to survive the night? “I know, but…”

She abandoned her admonition when she saw the tears clouding Joan’s eyes.

“She was always kind tae me.” Joan made no attempt now to conceal her grief. “I shall miss her so,” she sobbed. “I had always imagined that she would be here when… when I…”

“What? When you what?” Roselyn took a fortifying nibble of the dried apple which the Mortain cook had slipped into her hand as the pair scuttled through her kitchen on the way to the rear stairs that led down into the storerooms below. She considered offering a bite to Joan but decided against it and instead wrapped her friend in her small embrace and held her whilst she cried. Only when Joan quieted, her sobs now reduced to hiccupping gulps, did Roselyn resume her questioning.

“When you what, Joan? When did you expect Lady Margaret to be here?”

“When I come tae live i’ this keep. Forever.”

Had she heard correctly? Roselyn was never quite certain with these Scots and their strange form of speech. “You will live here? At Mortain? Why?”

Her friend lifted her chin and adopted a haughty, superior air, her efforts somewhat undermined by her continued gentle weeping. “Why, when I am wed to Edmund, o’ course.”

“To Edmund?” Roselyn gawked, her jaw dropping. Edmund was heir to Mortain, the son of Lady Margaret and her husband, Archibald, the laird. “But you cannot marry Edmund. He is old.”

“He is but a few years older than I,” countered the other girl defensively. “And we shall nae be wed for several years yet. Eight years, in fact, when I am nineteen years old. ‘Twill be a long wait, but my father insists upon it.”

Roselyn considered this news in slack-jawed horror. “You should be thankful for the wait. Surely you cannot wish to marry. It is… It will be…” Roselyn was not entirely certain what marriage would be, but she had no doubt that it was not a state to which any sane female should aspire.

“I know, but… are you not afraid? You will have babies, and… and…” The precise details escaped Roselyn, but she was convinced that the matter was dire indeed. Babies were a dangerous business for women.

“Edmund is kind tae me. I shall be happy. I ken that I shall.”

Roselyn had no desire to quash the other girl’s optimism though she considered it to be misplaced. Her own experience of the married state was sparse, she would readily acknowledge that, limited to just her own parents whose union was both distant and cold. She harboured the most profound of doubts regarding Joan’s future, but could not find it in herself to dampen her friend’s apparent enthusiasm, especially not on such a dark day.

“We shall be neighbours, after I am wed. Ye must visit here regularly. It will be so good tae have a friend here i’ the borders, especially wi’ Lady Margaret gone.”

Roselyn flattened her mouth, her smile wan and disappointed. “I cannot. We are to move soon, to Etal. My brother insists upon it.”

“Yes, the Earl of Ingram. My half-brother, in fact. He and my mother, his stepmother, have never been friends, and since he inherited the title he has ignored us and allowed us to live with my mother’s kin here in the borders, at Beauchamp Manor. However, he has written to insist that I must present myself at his keep near Berwick to be brought up within his household. My mother has no desire to go, she says she always hated it there, but will not allow me to go alone. We leave within a few weeks.”

“Berwick? That is in England, across the border. ‘Twill not be so easy to remain in touch…”

“That doesnae count,” insisted Joan. “We shall still be friends.”

“Yes,” agreed Roselyn. “We shall. Of course we shall.” She dusted off her thick woollen skirt. “Come, we should go back up to the hall. Lady Margaret does not like us to play down here, she says ‘tis not safe.”

Roselyn scrambled to her feet and shoved the last of her apple into her mouth.

Joan also made to rise, but the pair stiffened at the sound of masculine voices approaching. They dived back into the cranny they had been huddling in, between two huge sacks of grain.

Her Edmund? Perhaps there was some merit to this marriage plan after all. Roselyn shimmied back and concentrated on making herself as small as possible in order to escape notice. She did not fear the laird, she had no cause to, or his son for that matter. Mortain was a benign, easy-going household but their disappointed censure at her disobedience to Lady Margaret’s rules would pain Roselyn and embarrass her mother. She had no wish to be the cause of further distress in this unhappy keep. Not today.

The pair watched in silence as the men strolled the length of the storage chamber, passing within two feet of the girls’ hiding place. The laird and his son conversed in low tones, their voices subdued, but their words carried in the confined space and were easy enough to hear.

“It will not be long now. The physicians have said…” The older man bowed his head, his strong voice almost breaking in his grief.

“Physicians have been known to be wrong. She may yet rally.” Edmund patted his father’s arm, though his words of comfort lacked conviction to Roselyn’s young ears.

To the laird’s also, it would seem. “Nay, she will not. Not this time. She will not last the night.” He paused and heaved in a ragged breath. “I shall miss her so. She has been my companion these last twenty and five years, my closest friend, my confidante. How shall I cope? How shall any of us manage when she is not here?”

“Aye, ye’re right. We must do it, for her. An’ this is why we must sign the contract this evening. It is her wish.”

“Aye, lad. It is your mother’s desire to see it done, to have the contracts signed which will bind you to her sister’s daughter. It will bring her peace, at the end…”

“Aye, I know this. Lady Eleanor has the authority to sign on behalf of her laird, Joan’s father. Very well, we should get on with the matter. I… I do not believe we should delay unduly.”

The laird offered no further comment. His son’s meaning was clear enough, to the laird as well as to Roselyn and Joan who listened unseen. If Lady Margaret was to witness Edmund formally and irretrievably betrothed to Lady Joan, it had better be soon.

“So, why are we down here, then?” Edmund eyed his surroundings with displeasure. “Should we not be in the solar putting our seal to the contract?”

“A betrothal gift is customary. Margaret will expect it, as will the McGregors. I have several pieces of fine gold plate I have been keeping for this very occasion.”

“Ah, I see. Very well, let us press on.” Edmund strode on, toward the stairs below the buttery. He paused beside the stone staircase. “Would you like me to open the strong room?”

“Aye, lad, if you would.” The older man followed him, and as the distance increased Roselyn found their voices difficult to hear. Curiosity got the better of her and she poked her head out from between the sacks to further observe their actions. As she watched, Edmund ran his hand, palm flat, up and down the stonework at the side of the staircase.

His father leaned over and pointed to a precise spot. Edmund nodded at his sire and pressed hard on the stone indicated. Before Roselyn’s astonished eyes the entire side of the staircase swung outward to reveal a cavity concealed beneath the steps. Both men bent their backs to enter, disappearing into the space beneath.

“A secret room,” breathed Roselyn. “There is a hidden chamber. Did you know?”

Joan shook her head, her mouth forming a perfect ‘o.’

“I wonder what is in there.” Roselyn started forward, intending to follow the men under the stairs. Joan grabbed her arm.

“Nay, we must nae. ‘Tis a secret and… ye must promise ne’er tae tell. Ye must swear it.”

“Tell? Who would I tell?” Roselyn regarded Joan in astonishment. “I merely wondered…”

“‘Tis none o’ our concern. Come, we must be away, afore they come back out.” Joan scrambled past Roselyn and reached back for the smaller girl’s hand. “This way, we shall take the main stairs back up tae the hall, the way they came down. And remember, ye must tell no one o’ this. Not ever.”