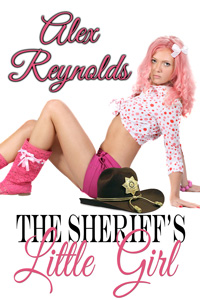 Julie felt awkward sitting in broad daylight waiting for a bus dressed the way that she was. Sure, she never really wore ‘normal’ clothes, but when they went to parties, she wore significantly fewer of them. She only had on her sneakers, a pair of fuzzy leg warmers, green metallic shorts that actually covered less of her body than some girls’ underwear and a matching crop top, plus a small stuffed panda backpack on her back. If people don’t like it, that’s their own problem, she told herself, trying to adopt an expression that matched that attitude.

More than that, she felt abandoned. She had woken up on the floor of her friend’s apartment after a night of partying at a local rave only to discover that her boyfriend, Crank, along with the rest of her friends, had taken off and left her to fend for herself. Her phone was dead and she had no money on her. The bus ride from Los Angeles back to her home in the desert town of Palm Oasis would take her all day.

Julie was a tiny girl with a petite frame. Crank could have easily carried her to the car if he had not been able to wake her up, like he had claimed.

Crank was a few years older than Julie. Sure, he sometimes did things like abandoning her today, and he didn’t always stick up for her when there was gossip about her at parties, and sometimes he said things to her that made her feel really bad. Still, he was generally a good enough boyfriend. He was so well liked at raves, and since she had started dating him, she had made so many new friends.

Plus, he took care of the stuff that she didn’t want to do. He had found their apartment and taken out the lease on it, and, unlike Julie, he had a job. Crank worked at the local drug rehab center as an orderly, and the money that he made there paid all their bills. Julie sometimes got paid for go-go dancing at clubs or promoting parties, but mostly, he supported her, at least financially.

Drug use, especially meth, was a big problem in Palm Oasis. It was a small town with little to do, so people turned to drugs out of boredom. Julie had experimented with a few things at parties herself, but had never done anything as dangerous as meth. Even though she didn’t get the impression that Crank did much at work, she was glad that he had the job he did. She hoped that he was helping people, at least a little.

When she thought about Crank working all day in the rehab center to support them, she softened a little. She reminded herself that she shouldn’t get too mad about things, and that Crank was really doing his best. After all, she could be tough to put up with. Her family had made that very clear to her when she was growing up. As the bus pulled up, she forced a bounce into her step before climbing on board. She could always make herself cheerful if she tried.

It was nightfall when Julie finally hopped off the bus and onto the dusty road that led up to the apartment building where she lived with Crank. Palm Oasis was a small town located in the desert to the east of Los Angeles. Had she been driving, she would have gotten home in about two hours or so, depending on traffic. But despite being twenty-four, Julie didn’t know how to drive.

It was a few blocks from the bus stop to her apartment building, and she felt a little creeped out walking home alone in the dark, especially in her revealing outfit. She clutched the straps of her panda purse tight and imagined that it would protect her. She smiled at how silly a thought that was, but kept on daydreaming about the black and white plush bear coming to life to defend her if anything scary happened. Thinking good thoughts made the dark streets less intimidating, at least a little.

Arriving at their stuccoed apartment building, Julie breathed a sigh of relief. She opened up her panda purse and pulled out a collection of stuffed animal and glitter plastic keychains that were attached to two keys and used one to let herself into the metal security gate that surrounded her building.

The petite girl ducked under the branches of an overgrown jacaranda tree that grew rather haphazardly in the courtyard, its roots pushing up the concrete to make it jagged. Her clunky platform shoe caught on the uneven edge of the pavement and she fell forward. She landed on her hands in a pile of the tree’s purple flowers. For a second, she felt like she might cry. Obviously that was silly, she told herself, but the day had been tedious and the walk home had scared her. This little tumble had pushed her over the edge.

She wished for a moment that Crank was the kind of person who she could turn to for comfort, but she knew that was a terrible idea. She imagined walking into the apartment with tears on her face and the kind of fuss that he would make. He’d start yelling at her right away, calling her a crybaby and complaining about how he never got a moment’s peace with her around.

Julie felt her eyes growing hot at just the thought of it, and she sat up, then crawled back and sat at the base of the tree, planning to stay there until she calmed herself down. She couldn’t shake the feeling of longing for someone to take care of her and to make her feel safe, but she knew that wasn’t something she was going to get.

From where she was sitting, she could see all the way down the walkway that led into each of the apartments on the first floor. After a minute, she saw the door to her apartment open. Her body tensed as she worried that Crank might be coming out. Maybe he was looking for her. Maybe he was upset that she wasn’t back yet. She bit her lip nervously.

Instead, an older man in grubby clothes exited.

“Thanks a lot, man,” she heard him say, his words sounding loud and clear in the quiet evening.

“Hey, no problem. Glad to hook you up,” replied a voice from inside the house. It was obviously Crank.

The man turned and walked down the walkway and out the security gate with his hands in his pockets. Julie was unseen in the shadows beneath the tree, but she caught a glimpse of him through the branches as he passed her. She’d seen him before, and she scanned her mind trying to figure out where. Finally, it dawned on her. He was someone who used to be a patient at the rehab. She had met him a few times when she was visiting Crank at work, but he must have left over a year ago.

Julie chewed on her nail as she thought about this. Why would this man be visiting their apartment? If Crank had remained friends with some of the patients from the rehab after they left, why had he never mentioned it to Julie? She figured it wasn’t a big deal, but the interaction kind of bothered her. Peeking out to make sure that the man had left, she found her way to her feet and brushed herself off. She was going to go ask Crank about this, even if he was going to yell at her for it.