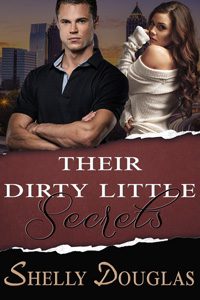 Kayla stood in the doorway of John’s study, taking a moment to admire the glint of gray that highlighted his short, dark brown hair before she approached him from behind. “Was that your author buddy on the phone?” she whispered in his ear.

Placing his tortoiseshell-framed eyeglasses down on the desk, he peered over his shoulder with a wry smile. “I just called to see if I could convince Max and his lovely wife, Chrissy, to make a trip to Atlanta, but he’s in the middle of writing a new chapter, so he’ll call me back later. I know they’re returning to Palm Beach for a vacation this spring, but I was hoping that you could meet them sooner.”

“Do you think they’ll come for a visit?”

“I think our chances are good. From what I’ve told him, he finds you utterly fascinating.”

“I thought firsthand knowledge from Max would be better than reading books or turning to the Internet for information on the lifestyle you seem to be interested in.”

“Is there something you’re not telling me?”

“I’m still trying to figure it out,” Kayla said rather sheepishly.

John swiveled around in his chair and rocked back and forth a couple of times, trying to understand the true meaning of what Kayla was attempting to say. “Whatever it is, we’ll get there together, my love. I promise.”

Though she nodded, her deep green eyes were filled with doubt.

Returning to their room, Kayla sat down on the bed and sighed as she took a book from her nightstand.

“This is the third time you’ve attempted to escape, my little bird. And I’ve warned you that there would be a punishment if you tried to leave our hamlet again.” As he crouched down beside the bed to look deep into her eyes, she knew this man meant business.

“This isn’t our home. You kidnapped me, remember?”

His hand came crashing down onto her rump. “You’re going to start speaking to me with respect,” he said, applying a hard smack to her other cheek. “And to help you remember, I’m going to teach you a lesson that you’ll not soon forget.”

She tugged at the rope that secured her delicate wrists to the headboard as he reached up her short dress and grabbed her underpants, jerking them down and over the bottoms of her bare feet.

“We both know you aren’t going anywhere, so calm down and raise those luscious hips of yours. I want your head and chest down when I fuck your sweet ass.”

“Oh, Jesus,” she mumbled in a quiet tone.

His chuckle sounded evil as he unzipped his jeans. “You can pray to whoever you want, but you’re mine now. Have I mentioned how long I’ve been dreaming of this moment?”

“Please, not there!” she begged.

Instantly pulling her hips up, he lifted her dress, roughly spread her buttocks, and admired the view. With a slow swirl of his tongue, he made a complete circle around the outside of her anus, and delighted as it quivered and trembled in response. “You’ve never been fucked in the ass before—have you, girl?”

“N-no,” she stuttered, placing her head down on the mattress.

“But you want it, don’t you?” he asked, sliding his finger inside her soaked pussy. “Since my little bird’s cunt is soaking wet, it would be a bad idea for her to lie to me.”

She silently moved her head to the other side.

“You really should be stretched first to accommodate the size of my cock,” he said in a serious tone, rubbing the slick juices over her delicate rosette before pressing inside. “But we don’t have time for a plug, so just relax and enjoy this little prelude.”

He watched her eyes fly open wide as his finger slid deep into her bottom, and he wiggled it up to his first knuckle.

“Since this is a punishment, I wasn’t going to use any lubricant. But I’m not as wicked as you might think,” he said, removing a tube of gel from underneath the bed.

“You’re a real fucking saint,” she whispered with a shudder as he spurted a glob of cold lubricant on her anus.

“Oh, no! You’ll keep this round ass up nice and high while I fuck it good and hard.”

“Please!” she screamed as he pushed into her trembling puckered entrance, stretching her tender skin. But at the same time, her ashamed, flushed face was hidden so he wouldn’t know she desperately wanted his touch as she quietly moaned with desire.

“Hush,” he said, whacking each buttock twice. “This could actually be pleasurable for both of us if you would relax that sexy pink ass,” he continued, slowly inching further inside her. “My only regret is not making it redder before I fuck it. Ah, something to look forward to the next time you’re in this position. Shall we say same time, same place tomorrow, lover?”

She turned her head away from him. “I’m not your lover.”

After pushing further into her anus, he pulled back, only to thrust forward with a long smooth drive. “You are now,” he said breathlessly before continuing to fuck her ass slowly and deliberately. “You’re all mine, my little bird. And I have no intention of letting you out of your cage.”

With eyes shut tight, she threw her head back, accepting each full thrust, determined not to show emotion to her captor. But as his fingers returned to her plump pussy and rounded her hardened clit, he knew she wasn’t going to be able to hide her exhilaration much longer.

“Oh, I’ve been right about you all along, haven’t I, doc?” he said breathlessly, rubbing her pulsing clit. “We make one hell of a pair, eh? Go ahead, come hard for me, baby girl. And I’ll be coming right behind you…”

“Oh, God! Oh, God,” she groaned, unable to hold back the relentless throbbing as her clit exploded in an uncontrollable, painful orgasm.

Long fingers dug into her flesh as he dropped his forehead onto his captive’s back and released a jet stream of hot, wild sperm into her long, dark channel. A satisfied, lopsided smile appeared on his face as his breathing returned to normal. “I think we both could use a shower before bed, my sweet,” he said, slowly slipping his flaccid cock from her crinkled flesh followed by a brisk smack to her bright pink rump.

“Can I take a shower by myself, please?”

“Not on your life, princess,” he growled.

Kayla closed her book and leaned back onto the headboard, deep in thought. Though this woman was being held against her will, there seemed to be a bond forming between the characters. And since this author usually wrote happily ever after endings, could this result in a ‘Stockholm Syndrome’ love affair between the psychiatrist and her captor? She needed to do more research on that subject.

“You and Kayla need to be patient,” Max Bowman reassured John, turning off his speakerphone for a more private conversation. “From what you’ve told me, there’s a possibility that even she might not know the depth of her desires. Honestly, this is what makes your romance so intriguing.”

“There’s an edge to her that excites me in ways you can’t imagine. I just wish she’d open up.”

“Tell me more about her. Your backgrounds are quite different, right?”

He laughed. “I’ve often thought of us as polar opposites. She’s an extremely intelligent woman with a medical degree from Emory University who has a successful practice in psychiatry. I, on the other hand, am a technical nerd who graduated from Georgia Tech with a group of friends who came up with the right idea at the right time and had the good fortune to retire at an early age. If it wasn’t for you, I might never have known that Kayla had another side to her.”

“It seems that renting a house next to you this past summer was lucky for both of us.”

Max laughed. “That intense look of yours turned out to be a pivotal part of the romantic suspense novel that Becca, Lizzy, and I wrote together while vacationing next door to you. I hope you didn’t take offense to the fact that my wife and co-authors thought you looked a little sinister.”

He chuckled at the thought. “None taken. My eyes may look creepy to some, but Kayla thinks they make me look dangerous in a sexy kind of way.”

“Believe it or not, we met through an Internet dating service.”

“Not so uncommon these days,” Max noted.

“At the age of forty, it’s not so easy to meet women, and my friends kept fixing me up with girls who were mostly attracted to my bankroll.”

“That wasn’t one of my dating problems,” Max lamented with a heavy sigh.

“Kayla has the typical charm of a hometown southern girl, and I love that about her. She’s also quite a gym rat, you know…” John suddenly paused, realizing that he was about to gush over his girlfriend’s physical attributes.

“She certainly is, both inside and out. Anyway, thank God she lost interest in those shallow sorts who were showing up at her front door in a seventy-thousand-dollar BMW.”

“You seem perfect for each other.”

“In many ways we are, but I wish she’d just be honest with me.”

“Trust me, John. You’ll find your way. Listen, if Chrissy and I can make it work, we’ll plan a trip to Atlanta within the next couple of weeks. I can’t promise anything because I’m in the middle of writing a new book. But listening to your dilemma, I’m thinking you and Kayla could emerge as my next hero and heroine.”

“Funny, she just expressed concern about that same possibility.”

“I’m not sure she’ll find that comforting…”