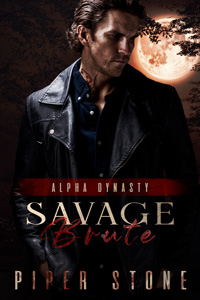 Fate didn’t make me his. Instinct did.

It wasn’t his mafia birthright that made Dax Dupree a monster. Years behind bars and a brutal war with a rival organization made him hard as steel, but the beast he can barely control was always there, and without a mate to mark and claim it would soon take hold of him completely.

I didn’t know that when he showed up at my bar after closing and spanked me until I was wet and shamefully ready for him to mount and ravage me, or even when I woke the next morning with my throat sore from screaming and his seed still drying on my thighs. But I know it now.

Because I’m his mate.

Publisher’s Note: Savage Brute is a stand-alone novel which is the second entry in the Alpha Dynasty series. It includes spankings and rough, intense sexual scenes. If such material offends you, please don’t buy this book.

“I love your tight little ass,” he whispered, wrapping his hand around my hair and yanking.

I clawed at the comforter, shifting enough he thought I was trying to get away. The two brutal slaps against my bottom were a reminder that there was nowhere for me to go.

No place to run where he wouldn’t find me.

I was wet all over, pussy juice slickening my inner thighs. Then I stiffened when he placed his cockhead against my puckered hole. “No. God. I just…” What the hell was I trying to say and why was I tongue tied? This wasn’t me. I wasn’t the kind of girl to allow any man to take control. There was no time to try to figure out the answers. He simply pushed his shaft inside inch by inch, plunging past the tight ring of muscle.

Maybe I should be grateful that he took his time, allowing my poor muscles to accept him. Panting, I couldn’t seem to stop shaking or clawing at the bed. At that moment, we were nothing but animals in heat, fucking by instinct.

Pain tickled every nerve ending, tears forming in my eyes, but within seconds it was quickly replaced with another wave of bliss. How could this feel so damn good?

When he was fully seated inside, a growl unlike anything I’d ever heard filled the room, echoing as it bounced off the walls. It was primal. It was possessive.

What the hell was he fighting against?

He drove deep inside, taking his time and allowing me to get used to his incredible thickness. Then he lost some of his control, plunging hard and fast.

The force he used was even more brutal, tossing me against the bed as he slammed into me over and over again. The entire bed was shaking, the hard slams as the metal posts hit the wall unable to overpower the noise of skin slapping against skin.

He pounded into me for what seemed like hours, every sound he made becoming more guttural.

I could swear the walls were shaking as he continued, refusing to let me go. I was exhausted, my throat tightening but still he wouldn’t stop. Then he lowered his body, placing his hands over mine then nuzzling against my neck. I would never forget the words he whispered into my ear or the meaning.

As he pressed a series of kisses against my neck, slowing his rhythm, suddenly we were as one. We rocked together, his hot breath pushing me into a lulled state. As his raked his teeth across the skin on my neck, I could feel his body tense even more. When he let out another primal cry, I squeezed my muscles.

Then a roar filled the room, savage and unforgiving as he erupted deep inside, filling me with his seed.

2022-02-05
Chris
Previous: Veiled Treasure: A Dark Mafia Romance by Measha Stone
Next: Shared by the Gentlemen: A Victorian Romance by Aurie Jameson