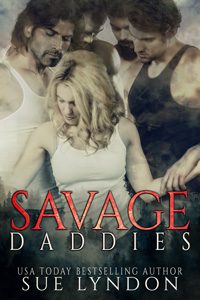 I once thought the savages outside the city were only a myth. Now I belong to four of them.

When I heard the stories of savages living in the wildlands, I never believed them… until today. The day started with me excited about the opportunity to go on a hike outside the walls. It ended with me captured, tossed over a man’s broad shoulders, and carried off to be claimed as a mate.

But this brute and his brothers aren’t just going to breed me. They’re going to make me their little girl, spanking my bare bottom thoroughly whenever I’ve been naughty and then showing me how pleasurable it can be to surrender my virgin body completely to my savage daddies.

Though I tell myself I’ll escape one day, with each stern punishment and every blushing climax the city feels further away. Deep down, I’m starting to wonder if I even want to go back…

Nash places a finger beneath my chin. “It’s time for your punishment, Josie. We’re going to spank your naughty, wet bottom, then we’re going to clean your privates thoroughly.” His deep, stern tone brooks no argument.

“You could have gotten hurt when you ran off all by yourself,” Axel says in a similar tone, and I shudder in place as heat abruptly starts throbbing between my thighs, hotter than the bath water. “You tried to escape us and you risked your safety in the process. We will not tolerate such disobedience from you, Josie, and you will suffer the consequences of your actions.”

I lower my head, feeling sufficiently chastised even though they haven’t begun my punishment yet. Nash runs the cloth over my shoulder while still holding my chin firmly in his grasp and I shiver at his touch. A sense of vulnerability steals through me, as well as helplessness.

I don’t have a choice.

They’re going to punish me in a most embarrassing manner, and then they’re going to clean my privates while I’m on my hands and knees, the most secret parts of me exposed to their gaze.

I start to move forward and both brothers help me get into place. My face heats when I lift my bottom out of the water. Axel trails his hand over my behind, cupping each of my cheeks in turn while I focus on remaining in place on my hands and knees, even though everything inside me screams to fall back into the water. Nerves besiege me. I have a feeling this spanking will be worse than the first one Nash gave me. Heated tingles flow through me as I recall all that happened that time in the boat, when he also fingered me and made me shatter into a million pieces, stroking my clit as he brought me to the heights of pleasure.

Will there be any pleasure now? I suppose I’ll find out soon enough.

Nash remains at my side and places one hand on my lower back. Axels scoops more water over my bottom and keeps cupping my cheeks. I tense, expecting the first slap to fall at any moment.

The anticipation of punishment prompts the aching in my core to intensify. I exhale a shaky breath and close my eyes, my skin prickling with sensation as I await the inevitable pain.

“You will never run from us again, Josie,” Nash says sternly. “You’re our little girl and we mean to keep you safe. We can’t keep you safe if you go running off. You’re ours.”

An instant later, Axel smacks my bottom. I gasp at the intense sting. The pain grows worse, more so than I expected, as the next five or so slaps fall hard upon my backside. Apparently, having a wet bottom makes a spanking hurt worse than usual and I open my eyes and shoot Nash a dirty look. He chuckles and brushes a strand of hair behind my ear.

“You were naughty, little one,” he says. “This is what you get. A hard, extra-stingy spanking on your bare, wet bottom. I bet once we’re through with you, you’ll think twice before you do anything so foolish again.”

It becomes hard to think as Axel continues thrashing me, landing quick, hard swats upon my wet ass. Every so often, he pauses to scoop more water over my smarting cheeks. It’s not long before tears burn in my eyes, but I blink rapidly in an effort to keep myself from crying.

“You’re going to live under our roof, little girl, and we expect you to follow our rules,” Axel says, not slowing once as he delivers harsh smack after harsh smack to my poor bottom. “You are lucky you weren’t attacked by an animal. Or worse—taken by another band of savages.”

Their continued scolding deepens my feelings of shame. It really hadn’t been smart to run off into the wildlands by myself, especially as woefully unprepared as I did. And while I’d been nervous about animals, it hadn’t occurred to me to worry about other savages out in the forest. I shudder at the thought of running into other men in the wildlands, perhaps a large group of them. What would they have done to me? I suppose I’m lucky I didn’t have to find out.

“Look at this naughty little girl,” Axel says, striking my left cheek with a searing slap, “getting her bottom spanked bright red by her daddies.”