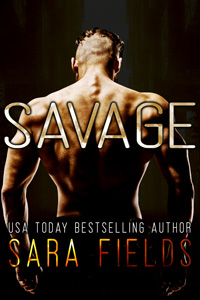 I thought no alpha could tame me. I was wrong.

Many men have tried to master me, but never one like Aric. He is not just an alpha, he is a fearsome beast, and he means to take for himself what warriors and kings could not conquer.

I thought I could fight him, but his mere presence forced overwhelming, unimaginable need upon me and now it is too late. I’m about to go into heat, and what comes next will be truly shameful.

He’s going to ravage me, ruthlessly laying claim to every single inch of me, and it’s going to hurt. But no matter how desperately I plead as he wrenches one screaming climax after another from my helplessly willing body, he will not stop until I’m sore, spent, and marked as his.

It will be nothing short of savage.

Publisher’s Note: Savage is a stand-alone novel which is the first entry in the Alpha Brotherhood series. It includes spankings, rough sexual scenes, intense and humiliating punishments, and strong D/s themes. If such material offends you, please don’t buy this book.

“I won’t be spanked like a naughty little girl,” I exclaimed.

“It’s no longer up to you, Freya,” he replied darkly, and I twisted once more, only to have his palm smack my ass once again.

Once the initial shock finally wore off, the pain from those spanks spread across my backside and I opened my lips as I tried to silently process them. I didn’t want him to hear how much he was affecting me, and I really didn’t want him to know how much this punishment was making my pussy tighten with even more need than I thought possible.

He held me firmly in place and then my spanking truly began. He spanked the upper curve of my backside, all the way down my thighs, ensuring that he left no spot unpunished. His palm was hard, it stung a great deal, and for the first time in my life, I started to feel out of control. I couldn’t stop him from spanking me. I couldn’t get off of his lap and I couldn’t stop the way my hips were rocking lewdly back and forth, trying to avoid each painful spank. He could probably see my pussy each time I did that, but the only thing I could think of was ending this painful spanking as soon as I possibly could.

“Stop. Please,” I whispered, hoping that he would hear the concession in my voice.

“This isn’t going to end until you fully learn your place, Freya, both over my knee and at the end of my cock,” he said darkly.

He chuckled and spanked me harder, focusing more thoroughly on the lower curve of my bottom and then my thighs. I squirmed back and forth, but his aim was true each and every time. I screeched as the full weight of what was happening finally washed over me.

Oh, fuck. This was a different kind of pain than one I experienced in battle. This was one I couldn’t fight back against. Instead, I was being held over his knees, getting my bottom spanked against my will and I had no idea when it was going to stop.

“Such a pretty little thing with a bright red little bottom,” he observed, and I shivered with shame.

“Fuck off,” I snarled. He tsked and spanked me even harder, ensuring to punish the underside of my bottom until I was breathless from the overwhelming sting.

It was then I realized that I could feel his rock-hard cock against my belly. It was enormous and for a second, I wondered how it would feel deep inside my tight pussy. My mouth went dry and my core twisted impossibly tight. A lightning bolt of desire cracked inside me and a rush of wetness dripped down my folds. I hid my face in the blankets, not wanting him to see just how much of an effect he was having on me. I didn’t want him to see how much he was making me blush right now.

I tried to push all of it away, but it simply seemed to grow stronger and stronger until it felt like it was a part of me.

Except it couldn’t be. It wasn’t possible.

He gave me no time to think about it any longer. His palm cracked hard against my backside again and again until I was so incredibly sore. My skin felt like it was burning with fire and my thighs ached, but he didn’t slow down. Instead, he spanked me even harder and I was unable to keep quiet any longer.

I begged him to stop. I begged for mercy. He gave me none.

“Are you feeling in control right now, little girl?” he asked carefully, taking a moment to thoroughly spank the backs of my thighs so hard that I had difficulty answering him until he paused. My entire backside burned hot, and I whimpered loudly with how very much it hurt.

“Good. Then we are just getting started,” he replied.

2020-10-26
Chris
Previous: Skylord: A Dark Dragon Shifter Romance by Delta James
Next: Theirs to Train: A Victorian Menage Romance by Samantha Madisen