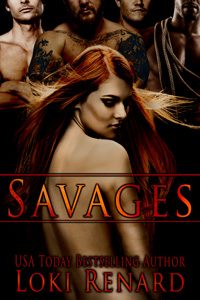 Out here beyond the wall, men take what they want.

I was warned. I was told what the savages in the wild lands outside the city would do to a girl like me, how they would ravish me, share me, and shame me. I should have listened…

Once I left home, I didn’t even last a day on my own. With a bear set on making me his next meal, it took four fearsome beasts of men to save my life. But the rugged, battle-hardened brutes who rescued me have no intention of letting me go. I belong to them now, and they are more than ready to strip me bare and punish me as sternly as needed to teach me my place.

They have claimed me, but they will not merely use my virgin body for their pleasure. They are going to breed me. They’ll take me hard and often, sometimes one at a time and sometimes several at once, until they’ve mastered me so completely that I can’t help begging for more.

“Ginger root,” he says. “Disciplining naughty girls since the before times.”

At first, it doesn’t feel like much. It just feels like a relatively small, but hard intrusion. It could be a lot worse. Is this what he thinks will subdue me? Sticking bits of the landscape up my ass? Well, good luck to him… wait… what is that?

I’m starting to feel a tingling deep in my rear. It’s just a bit weird at first, but then it starts to heat up and I realize with a start that the root is causing the tingling, which is quickly turning into a burning feeling deep in my ass.

Ice snorts in a satisfied way as my hips start to dance with discomfort. They’re not satisfied with beating my ass. They’re going to torment it from the inside out now. Every second that goes by, I feel the heat and tingling spreading. It’s not fair. The lubrication and my own squirming motions seem to be making it worse. I can feel the very tight ring of muscle burning the most, and then my internal parts starting to heat up as well.

I want to tell him to get it out of me, but I can’t speak thanks to the gag. All I can do is mumble into the leather and writhe about to the extent that Stryker and Hans allow. A few minutes into my session of torment, Maverick enters the house. I hear the door creak open and then a low whistle emits from him.

“And what lesson is that?”

“If she yells at me, she gets punished.”

“She yelled at you?”

“Loudly,” Ice says, unimpressed. “And without end. Now she has a reason to yell, but she can’t.”

It is humiliating to be spoken about like this, to be held in place by my savage men and treated more like an animal to be broken to their will than a woman with thoughts and feelings.

The ginger slides from my bottom, but the punishment is not over. Something thicker and harder is already pushing in. It’s Ice’s cock. He is making good on his threats to take me in my most sensitive place, and now it is more sensitive than ever.

I blush furiously, my entire body reacting to the hot humiliation of being held down and taken by this stern man who has disapproved of me from the very beginning. This is not sex for pleasure. This is sex for punishment. I can feel his disciplinary intent as he puts one large hand on the back of my neck and eases the broad head of his cock slowly, but inexorably into my bottom.

There’s no point begging him for mercy. I know that there will be none. I knew what I was doing when I taunted him in the first place, practically begging for him to prove to me that I could be controlled.

Now he is showing me, the throbbing hot flesh of his cock spreading my stinging asshole wide, inch after inch sinking into the tight cavity. The physical sensation is uncomfortable, but I feel his dominance coursing through me. With Ice, I will never get away with anything, and that knowledge makes my body sing with arousal I would deny if only I could.

I let out a little whimpering moan as the big, mean savage urges his cock forward, sliding the thick shaft in and out of that tender, embarrassing place. Only Ice could come up with such a twisted punishment. It is him all over to calculate a way to first shock, then overwhelm me. The rage that drove me to yell at him has abated, turning me into a whimpering, squirming little mess beneath him.

2018-06-08
Chris
Previous: The Viking’s Possession by Felicity Brandon
Next: Tamed for Their Use by Ivy Barrett