Saved by the Highlander by Emily Tilton 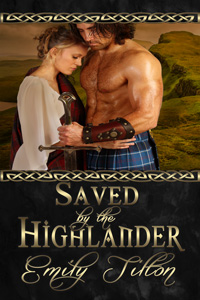 When the young Englishwoman Alice Lourcy is waylaid by outlaws while traveling through Scotland to the castle of Lord Roderick, the man her father has arranged for her to wed, she is left in fear for her life. Though the timely arrival of highland clan chief Niall MacAlpin and his men spares her from a horrible fate, she soon discovers that her troubles are far from over.

Certain that one of her attackers was English and doubting the honorable intentions of her husband-to-be, Niall refuses to allow Alice to continue her journey. Furious at the prospect of being escorted to Niall’s village against her will, Alice protests vigorously, only to find herself upended over the highlander’s lap for a painful, humiliating spanking.

Yet despite her wounded pride, as the days pass Alice is tormented by scandalous thoughts of the rough-hewn brute who rescued her and then chastised her so thoroughly. When at last Alice timidly bares her heart to him, Niall admits that he fiercely desires to claim her as his own, and plans are made for him to take her as his bride. But when a vengeful Lord Roderick seeks to reclaim Alice and make her his by force, can her highland warrior save her once again?

That thought—the idea that Niall MacAlpin would henceforth, while Alice Lourcy remained in his village, thrash her when she deserved thrashing—stirred emotions in Alice’s breast that she felt she could not interpret, but which she also felt she must push away at all costs despite not even understanding what they were. She did obey then, and sped her feet to the bed. To get this horrid moment over with would at least make it possible to go forward without acknowledging how it made her feel to have the chief of Clan Alpin inform her that he would take charge of her behavior, and employ his hand and his strap in the service of improving it, and Alice herself.

“Over the side of the bed, now, my lady,” Niall said behind her. Out of the corner of her eye Alice saw him go to an angle of the wall and take something from a hook that stuck out of the stone. The strap was long, black, and thick. Niall curled the end of it around his fist.

Alice still stood, trying to pretend she wasn’t watching what Niall did with the wicked leather implement. Niall’s voice came to her ears again, now a little impatient. “Do as I’ve said, my lady. Your elbows upon the mattress if you refuse to lift your skirts and I must do it for you.”

“Very well,” Niall said. “Lift them nice and high, and then bend over the bed for me and push your bottom out for the strap.”

How could she obey? Every inch of her body seemed to tremble with fear of what that long black strap would feel like when Niall began to whip her. How could Alice lift her skirts when she knew that the poor bare bottom she exposed would soon be red with the marks of punishment?

From somewhere, though, she took the strength to put her hands behind her and to gather the folds of the plaid with the silk of her chemise inside them into her hands, feeling as she did so the shameful movement of the air against places that Alice’s governess had instructed her so often should never be exposed.

“Bend over now,” Niall said again. His voice sounded gentler to Alice, as if her obedience in going to the bed and lifting her skirts had won her at least a little respite from his anger. She held her skirts up at her waist, terribly conscious of what Niall must see with her knees tightly closed, but knowing that when she bent over he might be able to see what Fiona had called her cunny, with its golden hair not quite concealing the cleft of her most intimate secrets. She blushed fiercely, and somehow she obeyed. She felt Niall’s hand upon her waist then, holding the skirts up. “On your elbows now,” he said. “Your bottom well pushed out.”

Alice arched her back, suddenly feeling that the humiliation the highlander visited upon her could not possibly grow any greater, and understanding it as a sort of freedom. She felt her prim little backside rise a bit and, on her slightly bent knees, move toward Niall, and she felt as if she truly were offering it to him in a gesture of submission. That made her blush again, but at the same time those strange feelings seemed to whisper to her that her submission was as it should be.