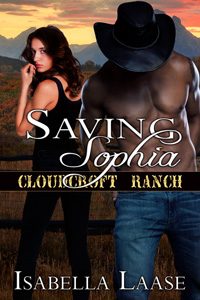 Sophia is immediately impressed by handsome rancher and resort manager Marcus Greene, but when her intense focus on her work puts her health at risk she quickly discovers that her new boss takes her well-being very seriously. After a thorough scolding, Sophia’s bottom is bared for a sound spanking, and to her surprise the humiliating chastisement arouses her deeply.

She soon learns that Marcus can be tender as well as stern, and being held in his lap and comforted after her punishment makes Sophia feel safer than she has in a long time. Over the coming days she grows to trust in Marcus’ discipline and guidance as he takes it upon himself to teach her what it means to truly surrender to a dominant man, but when Sophia makes a startling discovery about her past will she end up leaving Cloudcroft behind?

He crossed his arms and waited patiently while Sophia slipped out of her baggy sweats. She hesitated over her panties, but his frown clarified the message, and she stepped out of them with as much grace as she could manage. A slight gleam came to his eyes as he surveyed the tiny hairs that protected her secrets, and she blushed even further.

With a futile attempt to pull her t-shirt over her very virgin bottom, she stood while he settled himself on the big leather recliner and patted his lap. “Over my knee, Sophia.”

Mortification ran deep and the telling blush crept slowly down her entire body. It took four of the deepest breaths imaginable before her feet would take a step. His hands grew in size before her eyes, and their movement seemed to drop to slow motion.

Any other lap would not have been able to take her height, but Marcus did not have just any lap. She fit perfectly over his long legs as he adjusted her ass to the correct angle to meet his correction. Her hands grabbed his calf in a failed attempt at safety, and her feet didn’t quite reach the floor. She had no idea what to expect so she closed her eyes tightly, and her entire body tensed.

Instead of a correction, he tantalized the nerves on her bottom with a gentle touch. Tiny traces of his fingertips created light, swirling patterns across her skin that teased her vaginal walls into the play. The new sensations were overwhelming but when she tried to wiggle away, he locked her firmly into place with a quick scissoring of his leg. “Hold still, Sophia, and mind what I say. I’m not going to fight you on this.”

Trapped between his firm thighs, she went under his control with her glistening apex exposed to his sight. A simple touch to her wetness caused her to gasp, and he chuckled with his new information. “I think you might like this, little girl. Now, what did you do wrong?”

Her voice sounded like it belonged to an alien. “I… uh… didn’t take care of myself. I didn’t eat lunch. I used the heavy equipment when I could have been hurt.” Even without seeing his face, she knew he would expect a full accounting of her misdeeds, so she didn’t miss a thing. “And you didn’t like it when I called myself fat.”

His warm palm cupped her ass with another gentle movement. The tantalizing effect of his skin on hers became an unwilling aphrodisiac to her growing need, and she almost allowed herself pleasure from his touch. Despite her embarrassment, she wiggled her bottom to encourage a second exploration of her swollen sex.

Instead, he delivered a stinging smack, and Sophia gasped. The simple pain electrified thousands of nerve endings in her bottom to fuel the wetness between her legs. Before she could fully register the first connection, he delivered a half a dozen more. As he layered one on top of the other, a warm glow fought its way out of her body, and she bit her lower lip to keep her emotions under control.

By the seventh smack, he’d picked up his intensity and the warmth turned to sting and finally, they just plain hurt. Instead of layering, he circled her bottom with a random pattern that worked closer to her upper thighs. When he connected a little lower to the place where she preferred to sit, the sting built on her already established nerve endings and she yelped, “Ow… that hurts…”

Sophia’s failed attempt to wiggle out of his powerful grasp made her feel tiny but there was no escaping his control. Given no other options, she began to cry. It was an emotion she’d seldom allowed, but under Marcus’ hand, real tears escaped. She begged, “I promise… I won’t do it again. Please. Please. Ow. It hurts.”

He met her bottom with a stinging correction more times than she thought possible. The tenderness intertwined with a hormonal release, and genuine sobbing took over. Used to keeping her emotions to herself, the alien display of tears left her as mortified as the thought of her burning, hot bottom exposed to his gaze.

His hand finally slowed before he stopped altogether. With no appropriate reaction, she buried her face further away from his sight while her sniffling continued.

In a surprisingly gentle move, he rubbed the redness carefully to work the muscles deep in her core. His physical connection provided a foreign comfort, and she struggled to reconcile the emotion with her need to cry. The sting slowly subsided along with her hormones, and a gentle warmth relaxed her entire body.