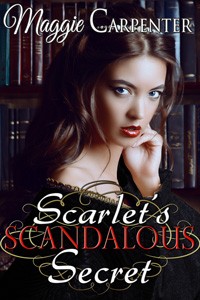 Though they were once inseparable, nineteen-year-old Scarlet Fairfax has spurned Richard Portman’s friendship since the fateful day when he took her in hand—and over his knee—in an effort to protect her virtue from the unwholesome attentions of a rakish foreign prince. But now, as she faces the potential ruin of both her own reputation and that of her family, Scarlet realizes Richard may be the only man who can rescue her.

When he receives a letter from Scarlet begging for his help, Richard doesn’t let the wounds of the past prevent him from rushing to the aid of the girl he loves. He can forgive her for storming out all those months ago and vowing never to speak to him again, but saving her reputation will require drastic action. He must marry her, and with haste.

Scarlet is both shocked and thrilled by Richard’s proposal, and when he makes it clear he will demand obedience from his bride it merely sets her heart racing faster, but it isn’t long before her penchant for defiance earns her a thorough punishment applied to her bare bottom. Yet despite her sore backside, the painful chastisement leaves Scarlet deeply aroused and aching for Richard to claim her properly.

But when the dishonorable rogue who caused all the trouble in the first place returns to London threatening to create further havoc, Richard will have to act quickly to avoid disaster. Will his bold plan succeed, or will Scarlet’s scandalous secret prove her undoing after all?

“I hate you, Richard Portman, I hate you.”

“So you said, and you’re about to hate me even more,” he declared, finally managing to push her dress and petticoats up to her waist. “Just be glad I’m too much of a gentleman to pull down your drawers and bare your bottom.”

“You are no gentleman, and I cannot believe you would even suggest such a thing!”

“And you, Scarlet Fairfax, at this very moment, you are no lady,” he scolded, “but a foolish girl who needs a good, hard spanking.”

Raising his hand, he let it fly with a hard slap, landing it against the centre of her right cheek, then immediately repeated the smack on her left. Scarlet squealed and kicked, and lifting his leg, he placed it firmly behind her knees.

“I’m not surprised you’re fighting me, but it will go better and be over faster if you don’t.”

“I will never, ever, ever speak to you again,” she shouted, wriggling profusely as she turned around to glare at him over her shoulder.

Ignoring her, Richard began smacking her in earnest, traveling his flattened palm over every inch of her behind, and when he landed several hard slaps on her sit spot, she yowled even louder, but as his hand rained its stinging slaps on Scarlet’s beautiful bottom, he found himself growing uncomfortably warm, and an energy was surging through his loins. As he dispatched the last few blows, making them extra hard, he had an overwhelming need to comfort her, then hold her in his arms and kiss her passionately.

“There,” he declared, unable to resist rubbing his hand over her cheeks, “you’re done. Don’t let me catch you doing such a thing again.”

“Just let me up,” she said breathlessly, “for goodness’ sake, let me up!”

“Calm down. This will help soothe the burn.”

“I don’t want you to soothe the burn.”

“If you don’t settle, Scarlet, I shall spank you some more. I’m shocked that you’re still such a spitfire. Take a deep breath and see the truth about this. If he had been successful, you would—”

“I don’t want to listen to anything you have to say,” she groaned, “please, just let me go.”

Shaking his head, he moved his leg and set her free, and crawling off his lap, she hurried a few steps away, rubbed her backside for a moment, then attempted to straighten her clothes.

“I would be grateful if you did not attempt to talk to me for the rest of the weekend,” she said, running her hands over her dishevelled hair, “and then never again!”

2016-03-26
+admin
Previous: His to Tame by Kallista Dane
Next: His Little Red Lily by Amelia Smarts