Don't Miss
Home / Blog / Seeking Her Out by Summer Graystone

Seeking Her Out by Summer Graystone 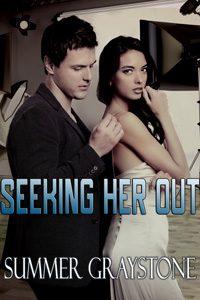 Cara Kinney is initially less than excited by Aiden’s offer to take her to dinner, but when she changes her mind he makes sure she doesn’t regret it. After a night of lovemaking more intense than anything she has ever experienced, Aiden invites her to accompany him to the club.

Soon enough she is discovering what it means to surrender her body to a dominant man’s masterful touch. But when she becomes overwhelmed by the scenes going on around her, can Aiden convince her to trust him as she continues her exploration of her newfound desires?

Publisher’s Note: Seeking Her Out includes spankings and sexual scenes. If such material offends you, please don’t buy this book.

“On your knees,” he ordered her again, and this time she slowly went down till she was kneeling in front of him. She kept her eyes straight so she was staring at his knees, not really sure what to do.

Then she heard him say softly, “Look at me.”

And she lifted her eyes to look at him.

“Good girl. Now for the rules,” he said as he folded his hands behind his back. “The most important rule is honesty, and by that I mean that if I ask you a question, you must reply as honestly as you can. This means that if I ask you if you hurt somewhere, you say yes if you do and how much. It doesn’t mean I would stop, it just means I would know how to proceed from there. Do you understand?”

She nodded her head, and Aiden placed a hand under her chin.

“Rule number two, you always use your words and you address me as Master or Sir. Also you answer me with as few words as necessary, unless I ask that you do otherwise. Are you clear on that?”

“Yes, Master,” came her loud reply, and even though she tried to school her gaze to show how unaffected she was, the twin peaks of her nipples were a dead giveaway.

“And finally, good behavior yields reward, bad behavior punishment. The severity of your punishment would be determined by your crime, and I decide what that punishment is.”

She nodded in reply, just before she remembered she was supposed to use her words. But before she could correct herself, she heard him say in that low drawl that caused shivers to rack her body, “You are getting spanked for that, Cara, hands on the table and ass in the air.” Smiling inwardly and giddy with a mixture of apprehension and excitement, she turned and placed her hands on the table with her ass in the air.

“Before I start, we have to talk about a safe word. Something you say when you feel like you’ve gotten to your breaking point. What word do you want to use?”

Cara thought about it for a moment. She had heard about safe words and knew this would mean she was in now. After a few moments, she finally looked at him with a small smile. “Twinkles.”

If he thought her odd, he did not show it. “So your safe word is twinkles then.”

She felt him come to stand behind her, then waited as he just stood there without doing anything. After the first few minutes, she was starting to wonder what was taking so long when she felt the sting of his palm on her denim-covered ass. It was mildly painful and nothing else, no hint of the pleasure she was promised. The next smack of his palm was even more painful, and Cara remembered his last instruction just in time. Surely getting up and telling him she was not into this would be a punishable offense. She was stilling herself for the next blow when his palm landed somewhere lower than her ass and slightly in between her legs. This time she felt shockwaves between her legs, and could do nothing to stop the gasp/moan that came out of her mouth. But the sensation of pleasure was fleeting and by the time his hand descended on her ass again, it was maddening because it was nowhere near the spot that had given her that subtle hint of pleasure. For the next eight strikes, Aiden alternated his strokes all over her ass and between her legs, each one overlapped by the other and all of them turning Cara to a panting, moaning mess who couldn’t seem to decide if she was experiencing pleasure or pain, but who was ready to continue so she could decide for sure.

2017-10-22
Chris
Previous: A Firm-Handed Man by Constance Masters
Next: Married to Her Master by Aurie Jameson