Sentenced to the Nursery by Carole Archer 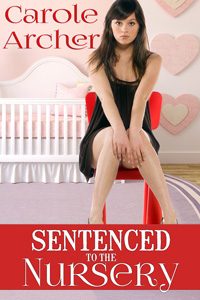 Nineteen-year-old Tammy is accustomed to a life of luxury, untouched by the hardships of a world just beginning to recover from a catastrophic economic collapse. But while her father’s wealth and influence have helped her get away with a long list of petty crimes, there is a limit to the government’s patience, and when she pushes things too far she ends up in deep trouble.

After a childish outburst in the courtroom earns her the wrath of the magistrate, Tammy is sentenced to the nursery. She will spend the next year under the care of a strict daddy who will have complete authority over her. Soon enough, Tammy has been stripped bare, spanked soundly, bathed, diapered, and put to bed in a crib, and her punishment is just beginning.

Tammy quickly discovers that there are many ways to make a naughty little girl blush, yet despite her shame it isn’t long before she finds herself yearning for her stern, handsome daddy to claim her thoroughly. When he takes her in his arms and gives her exactly what she needs, Tammy is satisfied more completely than she would have thought possible, but will her daddy’s firm-handed discipline be enough to teach her to be his good little girl?

Publisher’s Note: Sentenced to the Nursery is a stand-alone book set in the same world as Sentenced to the Punishment Clinic. It includes spankings, sexual scenes, age play, and more. If such material offends you, please don’t buy this book.

“Come with me,” Matron said, marching from the room. They passed her bedroom and went into the bathroom, which was dominated by a huge bathtub. Tamara stood to the side, watching as it was filled with water. She pouted. “I like bubbles in my bath.”

Matron looked up. “Bubble baths are for good girls. I have yet to see evidence that you’re anything of the kind.” Turning away, she continued to fill the tub. Testing it with her hand, she indicated for Tamara to get in. The water was a nice temperature, but as she lowered her sore bottom into the water, she winced. “Ow ow ow, too hot,” she protested, standing up straight.

Matron picked up a long-handled bath brush and a bar of soap. “Get your naughty little botty into the water this instant. Unless you want me to give it a few whacks with this first,” she threatened, waving the brush. Eyes wide, Tamara quickly sat down, hissing as her burning buns pressed against the surface of the tub.

Rubbing the soap against the bristles and working up a lather, Matron grasped Tamara’s hand, raised her arm, and scrubbed her from wrist to armpit until her skin was pink. The young woman pulled faces of protest as her other arm was washed in a similar fashion. Then she lay back obediently while her chest and stomach were scrubbed. She winced as Matron grabbed each breast and rubbed the brush in circular motions, paying particular attention to Tamara’s sensitive nipples, which swelled in response.

Tamara leaned forward when told, closing her eyes and sighing with undisguised pleasure as her back was scrubbed. She felt a twinge of sadness as she imagined her mother performing this task for her as she prepared for a night out.

“On your knees,” Matron ordered, and Tamara rushed to comply, grateful to raise her stinging behind out of the hot water. Matron re-soaped the brush before grasping the young woman’s buttock, tugging it aside and working the brush up and down the crack of her ass. Tamara shrieked in protest as rough bristles probed her anus. Her cheeks flushed crimson as she reached back and shoved the brush away. Instantly it smacked against her open palm. Tamara wailed in agony as she held her hand in front of her and blew, trying to alleviate the sting. Shaking her head in resignation, she remained still as she was scrubbed thoroughly between her cheeks. When Matron’s finger slipped into her anus and was worked in and out, Tamara clenched her fists, gritted her teeth, and prayed for her ordeal to be over. She was relieved when the soapy finger finally slipped out and her buttock was released.

When Matron scrubbed the brush over her tender backside, Tamara groaned. Squirming her butt in an attempt to shake off the irritating brush, she yelped as it was lifted away, only to smack down hard on her right cheek. An equally stinging smack landed on her left, and Tamara wailed her apologies.

“Please, no more, I’ll be good,” she promised, breathing a huge sigh of relief when the brush moved down the back of her thighs, continuing to scrub her skin to a rosy hue.

2016-12-03
+admin
Previous: Being Trevor’s Little Girl by Stardawn Cabot
Next: Claimed by the Kings by Loki Renard