Sentenced to the Punishment Clinic by Carole Archer 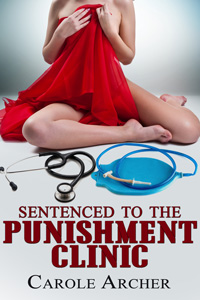 In the wake of an economic crisis that brought much of society to its knees, twenty-five-year-old Maria Davis has grown adept at surviving on the streets, but her luck runs out when she is caught in the act of stealing from the home of a high-ranking government official. Sentenced to a day in the Punishment Clinic, she faces what will be by far the most humiliating experience of her life.

She will be stripped bare, intimately examined, thoroughly cleansed, and severely spanked, and that will be just the start of her ordeal. Helplessly aroused and utterly on display, she will be made to surrender her beautiful body to be used and enjoyed by the stern, handsome medical professionals tasked with punishing and reforming her. Before her sentence is complete, she will learn what it means to truly blush as she begs to be taken in the most shameful way possible.

Publisher’s Note: Sentenced to the Punishment Clinic is not a romantic story and it is not for the faint of heart. It includes harsh spankings, intense and humiliating punishments and sexual scenes, and extensive medical play. If such material offends you, please don’t buy this book.

Maria’s mouth fell open. “No!” she snapped, wrapping her arms around her upper body.

Dr. Carter took a deep breath and stepped towards her. Grasping her arms, he pulled her up to a standing position.

“No, you can’t do this,” Maria yelled, as her arms were roughly pulled above her head.

“You’ll learn quickly that I don’t ask twice. Things will be so much easier for you if you do as you’re told the first time. Hold her,” he said to Scott, and Maria struggled as large hands gripped her wrists firmly.

“Stop struggling,” the doctor said, half smiling as he stroked her cheek. “I have to carry out your punishment, that isn’t up for debate. We both have to abide by the court’s decision. The only choice you have is to take what you’ve earned bravely, or to fight me every step of the way. It doesn’t matter to me. You’re only making it harder on yourself if you try to resist; it’ll happen regardless.”

As he lowered his gaze to her chest, Maria watched as the doctor’s hands followed his eyes. They brushed over her breasts, moving down to her waist, where he grasped the hem of her grubby white t-shirt and pulled it upwards.

“Oh, God, no,” she whimpered as the top was whisked up her arms, which were released momentarily by the guard. Lowering her hands to cover her breasts, Maria yelped as her arms were pulled upwards once more.

“No, you don’t,” the doctor gently scolded, reaching his arms around her and unhooking her bra. Maria’s cheeks flushed as he gazed into her eyes, his hands pulling the bra cups upwards, revealing her small breasts.

“Oh, you have no idea how humiliating this is going to be,” he said, sliding the garment up her arms and using it to bind her wrists together. “If you’re embarrassed now,” he added, cupping her face in his hands, “I’m not sure how you’ll cope tomorrow.”

Maria’s heart almost stopped when the handsome doctor reached out and gently stroked her hair. “Relax,” he said, releasing his grip on her and backing away, gazing down at her breasts. “You might even enjoy this.” Tweaking her nipples, he grinned at Maria’s gasp of shock. “Oh, I’m going to take great pleasure punishing you. It’s not often we get such a sexy young prisoner to deal with.”

2015-12-12
+admin
Previous: His Lordship’s Mate by Jaye Peaches
Next: His Firm Hand by Shelly Douglas