Serving the Immortals by Katie Douglas 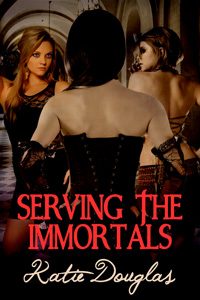 Sabine Fischer’s life is changed forever the moment she sets eyes on Monique Araignée. The beautiful, mysterious woman is unlike anyone Sabine has ever met, and she cannot help obsessing over her. But when she takes her curiosity too far, Sabine ends up over the tall, stern woman’s knee for a painful, humiliating bare-bottom spanking.

Though the encounter initially leaves her confused and unfulfilled, after Sabine is visited in the night and thoroughly dominated by Monique’s servant, Hannah, she learns that the two women are vampires and that from now on she will be expected to serve them.

Sabine quickly finds herself drawn irrevocably into a dangerous yet exciting new world, and surrendering to Monique and Hannah’s skillful mastery of her body brings her more pleasure than she would have ever thought possible. But when another powerful vampire seeks to harm Sabine, will her mistresses be ready to do whatever is necessary to keep her safe?

Publisher’s Note: Serving the Immortals includes spankings and sexual scenes. If such material offends you, please don’t buy this book.

In the night, when the candles and fire were out and a draft was making my neck cold, I heard the handle turn then my door opened with a squeak. Afraid, my eyes widened as far as they could, and I stared wildly into the darkness. When someone touched my shoulder, I began to scream, but they covered my mouth with a hand.

“Don’t make a sound, and don’t move,” a woman’s voice uttered. I didn’t know whose voice it was, except that it was someone I’d heard before. I barely knew what was happening, when a gag was placed over my mouth and small fingers were fastening it behind my head. I was more than a little afraid as the heavy covers got turned back, revealing my naked body.

“She is quite attractive, is she not?” The familiar voice spoke again, and I placed it as Monique.

“Yes, Mistress.” That was definitely Hannah’s voice. How could they see me in the darkness?

“You would like to play with her, wouldn’t you?” Monique purred.

“If it pleases you, Mistress.” Hannah’s voice trembled in a way I’d never heard before.

“Show me how you would like to play with her. But no orgasm without permission. For either of you.” I heard footsteps then the creaking of a chair; presumably Monique had sat in the armchair by the fire. Why didn’t they put a light on? If I wasn’t gagged, I would have asked them.

Before I could think about whether there was a lamp nearby, I felt Hannah’s fingers on my breasts, dancing over them lightly like a figure skater. I arched my back, to get closer to her as she seized my nipples, one in each hand, between her thumbs and her forefingers, and she began alternately stroking them and tugging on them. I wanted to call out in pleasure, but through the gag, very little sound escaped. My nipples became hard very quickly, and I wanted her so much. I reached out to find her own breasts; I wanted to take them in my mouth and lick them all over, finishing with her beautiful dark pink nipples, which were still etched into my memory from the last time we fooled around. Instead, I had to settle for stroking them with the one hand that could reach.

I was still thoroughly enjoying myself when Monique murmured, “Bad, bad girl, Sabine. I told you not to move. Hannah, you know what to do.”

I was startled that she’d been able to see me moving in the dark. The hands holding my breasts now relinquished them, and I was turned onto my front. I tried to protest but the gag in my mouth stopped me making any intelligible sounds. I felt my wrists and ankles being encircled in something cold, probably metal, and when I tried to flex my arms, I discovered they were restrained. Fear set in and I pulled harder, trying to kick too. A sharp swat caught my attention as Hannah followed Monique’s instructions. Her hand was so hard, and the more she spanked me, the more I struggled, but I was held tightly.

The bite of each new spank made me try to kick and flail my body, to get away from it, but it was futile; the restraints held my limbs fast, and soon I was making muffled grizzling noises into the pillow. I had forgotten how mean her hand was when she spanked; in every other way, she was such a soft, sexy girl. My bottom burned under the onslaught, and soon I was trying my hardest not to cry, while underneath me, I could feel the sheets growing wet.

“Enough.” Monique’s voice was barely audible over the sound of Hannah’s palm making contact with my bottom. When Hannah stopped spanking me, my breath was coming in gasps and bursts. My captors gave me a few minutes to collect myself, then Monique spoke again.