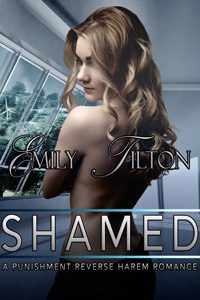 Five men will teach this Earth girl her place in the most shameful way possible.

Though Araminta Lourcy grew up looking down her nose at the colony planet of Draco and its people, when Earth falls into turmoil the beautiful, spoiled eighteen-year-old is left with nowhere else to go. But before she is allowed to join this new society, her arrogance must be dealt with…

Upon her arrival, Araminta is given to five powerful, dominant men to be trained and cured of her hubris. She will be stripped bare, punished sternly for the slightest disobedience, and made to surrender her virgin body to be used more thoroughly than she could have ever imagined.

Then at last, blushing crimson and quivering with humiliating need, she will beg for the chance to publicly demonstrate her utter and complete submission to the men who have mastered her.

“She was slow to take the rest of her clothes off at my office, when she was told to. I decided she should have to earn the privilege of wearing them again. I left her the panties because her pussy looks so sweet in them, but if you think they should come off and stay off until she shows us she can behave herself, I certainly won’t object.”

Araminta cried out softly as she listened to herself discussed so frankly and lewdly. Ged had to admit that Masdin’s idea dovetailed very nicely with his own intentions. For a few moments, he worked Araminta’s pussy, loving the slickness of the warm slit where all their cocks would soon go, and the way her rising cries showed the need she had for fucking despite her arrogant attitude toward the colonials who would deflower her.

Then, abruptly, he pulled his hand away, changing Araminta’s moan into a forlorn cry of frustration. Stooping a bit, Ged hooked his thumbs into the waistband of the black panties and stripped them down to show the girl’s sweet, lightly thatched pussy to the eyes of all her masters. He let them drop to the floor around her feet, and then he straightened and pronounced his judgment, addressing not Araminta but his fellow masters.

“She’ll be naked all day tomorrow at least, to show off her waxed pussy. She has to learn to appreciate her own beauty, her own aesthetic attraction, properly, before she undergoes sexual use by the men of Draco. After that, as she earns back her clothing, she will begin to understand how her body can contribute both in the aesthetic and in the useful aspects of her new life.”

Araminta emitted a little gasp at this dramatic, rather cerebral formulation, and the professor nodded appreciatively, looking down at her.

“I think that makes excellent sense, Mr. Ged. Araminta, I know you’re a very smart girl, and I think you probably understood exactly what Mr. Ged meant, but even if you didn’t, his method will teach you a lesson that goes beyond words, into the realm of what some have called the sublime.”

“In any case, you will be allowed to wear panties again after your defloration tomorrow night, if you behave yourself in the bedroom. Mr. Ged is just the man, I believe, to show you off in the nude tomorrow.”

“Show me off?” Araminta asked in a whisper.

“Yes, my dear,” Ged replied. “That’s why I was chosen as one of your masters. Your assessment showed that you have a deeply held feeling of superiority concerning Earth’s high culture—the sorts of display that occur in orchestra halls and opera houses. We have a very good way of correcting that.”

“What?” she breathed, her voice barely audible now and her face bright red.

“Wait and see,” Ged replied, drawing a chuckle from Red and the colonel. “Now it’s time for your pussy to be bared.”

In her bedroom, Ged, who considered waxing young women’s vulvas and rear cleavage a sort of specialty of his, had set up the triangular cushions that during the patriarchal period on Draco had become standard furniture of every adult bedroom. Araminta’s face on seeing them confirmed that such things had fallen entirely out of use on Earth, the so-called egalitarian society that ended up condemning the merest hint of sexual pleasure through unequal power.

“Sit right here, Araminta,” he said, “with your legs spread and your knees up. You’ll spend a lot of time over these cushions, being fucked, but for now they work well for your first wax. Red and Professor Nesterius, would you hold her open for me, please?”

Brow furrowed, she gave Ged a pleading look, but he nodded toward the cushions positioned at the end of the bed, and laid his hand on her sweet young bottom where the marks of the professor’s cane had faded to purple. He squeezed the little cheeks, his middle finger working inward to touch her anus lightly, and Araminta jumped forward with a squeal of surprise. She looked back at him, and he nodded one more time, content to let her imagination drive her forward, as she saw herself in her mind’s eye, the way she would look once she had taken her place, naked and spread wide before her masters.

For one more moment she hesitated, her nose twitching adorably, and then she darted forward and clambered onto the bed, giving them from behind a lovely glimpse of the pouting slit soon to be bare between her thighs. Red and the professor stepped forward, each taking one of her knees, as soon as she had turned to sit on her backside in the vee where the two cushions joined. Araminta gave a little cry as they raised her legs so that her knees nearly touched her breasts.

Ged had fetched his clipper from Araminta’s dresser. Standing between her raised feet, he showed it to her. “We’re going to start by removing most of your hair down here. Then I’ll wax you to make you nice and smooth for fucking.”