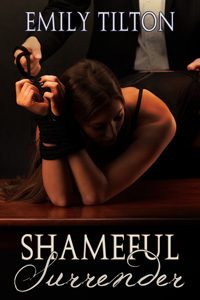 Thirty-three-year-old tech company CEO Maia North has never been spanked, and she has certainly never been brought to a quivering, shameful climax while bent over the hood of her car in the company parking lot, but her life changes in a moment when handsome businessman Gordon Ernkat is tasked with giving her exactly what she needs, whether she likes it or not.

Maia has something that Gordan’s employers want, and he is going to get it from her, one way or another. Maia soon finds herself being taken by van to a secret location, and before long she is blushing crimson as she is stripped bare, intimately examined, and punished sternly with Gordon’s belt. But will mastering Maia’s virgin body prove sufficient to compel her surrender?

Publisher’s Note: Shameful Surrender is a stand-alone short story which is the third entry in the Bound for Service series, which shares the same near-future setting as The Institute Series. It includes spankings and sexual scenes. If such material offends you, please don’t buy this book.

“I will,” she sobbed, bouncing desperately up and down on his hand, trying to rub her clit against the ball of his thumb as he pressed the fingertip further into her tiny anus, as if telling her that she would belong to him there, too.

“You will what?” he murmured into her ear.

Gordon had given all the rational arguments about the metadata back in the boardroom. Why had Maia refused to see reason? Right now she had no idea, and all she had to do was say she would do the thing she desperately wanted to do—and she didn’t even have to admit she wanted it.

She whispered, through the panting he caused with the tiniest movements of his fingers, “I’ll be a good girl.”

As soon as the words left her mouth, she felt him take hold of the small of her back, his big left hand steadying her so that his right, working her clit, could push her straight over the edge of her orgasm and into space, flying somehow under the power of her wantonness, the rocket fuel provided by his knowing hand.

He stripped her jeans down, then, and Maia only had to step out of her sandals, and then the pants and panties. They could all see her red-furred pussy, now, the way she shaved most of it and left a little tuft at the top, just like Catherine did on NMB, because Mr. Stonehill had told her he liked it that way. How did Gordon like a pussy to look, she wondered with a deep blush as he picked her up and put her in the exam chair?

She wouldn’t have to take off all her clothes, then? Wouldn’t have to stand naked in front of the big window? Gordon had commuted her sentence in that regard, Maia realized, just as he had made her come over her hood in the parking garage rather than spanking her with her jeans down.

“Knees in the stirrups, please,” the doctor said. Maia bit her lip, the heat rising in her cheeks, as Gordon helped open her that humiliating way. She hated the gynecologist’s office not because of the embarrassment itself but because of the way her mind and her body reacted to it—the way she always worried about getting aroused even though in the reality of a GYN appointment she never did, since nothing actually arousing ever happened when she lay opened and exposed for the doctor.

Now, though, with Dr. Franklin on a stool looking at her, touching her in a very different way from how her own doctor did; with him rubbing cool, slightly stinging alcohol on the sensitive little place between her vagina and her anus; with Gordon standing next to her, his left hand casually on her right knee; with the doctor saying, for some reason, “There we go—it will come on line in a few seconds”; with Gordon saying, “Go ahead and test her responsiveness for me”; with the doctor’s fingers…