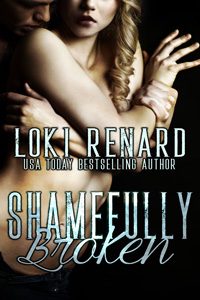 She needs his protection. He demands her surrender.

Since the arrogant, infuriatingly sexy brute spanked her like a little girl on her eighteenth birthday seven years ago, Ellie has done her best to avoid Mason Malone, and he is the absolute last person she wants to come crawling to asking for a favor. But with her brother deep in debt to the wrong people and her life in danger, Ellie knows Mason is the only one who can help her.

Mason agrees to intervene, but the rough, battle-hardened former Marine turned millionaire owner of a private security agency is no knight in shining armor, and his assistance will come at a high price. In return for his protection, Ellie will be made to surrender her body to him utterly and completely, to be used anywhere, anytime, and in any way he pleases.

He will not be patient. He will not be gentle. He is going to make her pay for all the years she spent looking down her nose, pretending she was too good for a guy like him. She will moan, plead, and cry out with pain, humiliation, and helpless, desperate need as he strips her bare, punishes her harshly, and then takes her over and over, each time harder than the last.

The gag slid into her mouth, the ball resting against her tongue. When she bit down she tasted leather and rubber. He had taken the power of speech from her and she was furious, but she was also a fraction of his size and there was nothing she could do besides make grumbling noises as he slid back a little, still keeping her pinned, though with a little less force.

“You really know how to make a bad situation even worse, Ellie,” he said. “Must be a family trait.”

She felt him pulling her hands back and fastening them together with a tie of some kind. She couldn’t see it, but she could feel soft silk that was strong and immovable as she tried to pull her hands out of the tie.

He had her now. She couldn’t say anything, she couldn’t even grasp for freedom. She was utterly captured.

Mason pulled three pillows to the center of the bed and lifted her up, placing her over them. Her ass was left high in the air, vulnerable to his displeasure.

He stood back, looking at her. She would have sworn, but she couldn’t, so she laid there, bound and gagged, her eyes narrowed at him as his green gaze ran over her naked body. She should have known that he would up the ante. Mason had never been able to stand anyone else having the upper hand. He stepped back toward the bed, looped the belt double in his hand, brought it up into the air and then back down again across the center of her ass with a swift stroke that made her howl against her gag.

“This is for biting me,” he said. “And for destroying the contents of your cage, not to mention throwing a tantrum when I wouldn’t allow you to be put in harm’s way.”

The belt cracked through the air again, landing precisely below the first stroke. She squealed into the gag as the belt imparted a searing sensation that hit her nervous system at a much higher pitch than when he spanked her. It didn’t have as much weight behind it, and the effect did not sink as deep, but it was turning the surface of her cheeks into a molten Hades.

“You are an impatient, ungrateful, spoiled little brat,” he growled down at her.

She shut her eyes, trying to avoid the sight of the belt. She could still hear it as it swept through the air, cutting across her cheeks for a third time. It found the sensitive skin at the very base of her bottom, where her cheeks met her thighs. She screamed into the gag, her legs kicking furiously. She would have propelled herself off the pillows and perhaps the entire bed if he hadn’t grabbed her by her bound wrists, steadying her for another three swats of the belt, each of which landed more or less precisely where the first three had, painting the middle of her bottom to the tops of her thighs with pain.

Tears blurred her vision as she experienced pure pain and utter humiliation. He was holding her down, beating her like a dog, and there was absolutely nothing she could do about it. He was merciless, utterly cruel, and in that moment she hated him so much she wished she’d bitten him a hundred times over.

She lost count after that. The belt kept traveling up and down her bottom and she kept squirming and fighting it as her tears flowed until finally she practically choked on the gag with all the sobbing and coughing. There was a brief moment where she was sure she wouldn’t be able to breathe thanks to her nose being blocked with her misery, but Mason released the gag, enabling her to take a deep breath, which then emerged from her mouth in a howl as the belt landed again in a searing stroke that took both cheeks in a hard swat.

When he was done, she cried on the bed for what seemed like forever as Mason walked around her, undoing the binds holding her wrists, then settling in on the bed and pulling her up against him, her head on his lap as he began to rub his hand over her bare back and bottom, soothing the very same sting he had just imparted.

2018-03-03
Chris
Previous: The Hunter’s Mate by Morganna Williams
Next: His Human Captive by Stella Rising