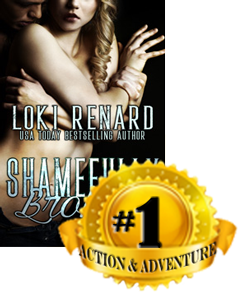 Loki Renard‘s latest release, Shamefully Broken, has claimed the #1 spot in the Action & Adventure Romance Fiction category on Amazon, and it has made the Top 30 in the Romantic Suspense category as well! Congratulations, Loki!

★★★★★ WhiteWitch519 @ Amazon.com “OMG! Loki Renard’s genius strikes again! Dark, delicious, erotic, and utterly decadent!” on March 7, 2018
Elliott “Ellie” Taylor-Chapman…rich, entitled, and desperate. Her brother, Aiden, debt-ridden and drug-addled, has disappeared. She’s no idea where he’s gone, who’s after him, or what they want. With nowhere to turn, she screws up her courage to face the one man she hates. Mason Malone, who had the audacity to spank her like the child she was on her 18th birthday, is the one man who humiliated her beyond forgiveness. But Ellie’s terrified. And Mason’s the only one who can help. Screwing up her courage to face him is one thing. Asking him for help? Something altogether different! Ellie thinks Mason’s former friendship with her brother will help. She couldn’t be more wrong!. Oh, Mason’s willing to help…for a price. But it’s not Ellie’s money he wants. It’s Ellie herself. Without that, Aiden’s doomed. Does she have an alternative? Ellie soon realizes she’s in so far over her head. Submit to Mason? Oh, no! Mason wants so much more than her submission. Can she do this? Ellie soon realizes she’s no match for the dominant former Marine. But when Ellie’s very life is at stake, she understands she has no choice. Even Mason, with all his resources, may not be able to protect Ellie, much less Aiden. As danger closes in from every direction, Mason’s demands grow. Can Ellie do this? Is it worth it, even for Aiden? Can Ellie trust Mason? Will he keep his end of the bargain? And just how far will Mason go to claim Ellie’s complete and total surrender? It all comes down to one thing…trust. Without that, no one will survive!

I absolutely adored this book. Ellie’s a spoiled little rich girl who’s desperate in so very many ways. While her brother may be her reason for approaching Mason, Ellie needs his help just as much as, if not more, than Aiden. She’s headstrong, willful, entitled, and bratty. And Mason? He’s as tough as nails, implacable, unmovable, and dominant to his core. With nothing in common other than Ellie’s brother, these two are the proverbial immovable rock meeting the irresistible force. Yet Loki Renard has created a story filled with overwhelming domination, hesitant submission, and intricately woven suspense that’s riveting, Ellie’s desperate plea to Mason, her abject terror and fear of the price Mason requires for his help, fly off the page. Mason’s ruthlessness, utter obsession with Ellie, and seeming indifference to Aiden make him completely unpredictable. At times, I thought I knew exactly where the story was headed. I was so very wrong. Predictable? Oh, no! Captivating? Absolutely! Loki Renard’s brilliant! I wish I could give Shamefully Broken more than five stars! Congratulations, Ms. Renard! You rocked it!

Not for everyone due to domestic disciple and intense D/s themes… please heed the publisher’s warning and if you do purchase, resist passing judgement on alternative lifestyle practices by posting negative reviews.

Disclaimer: No Kindles were seriously harmed while reading this novel.

Disclaimer for the Disclaimer… The term “seriously harmed” is not intended to include: overheating, scorch marks, minor melting or inconsequential fire that can be put out with an extinguisher. Fire retardant gloves highly recommended while reading.