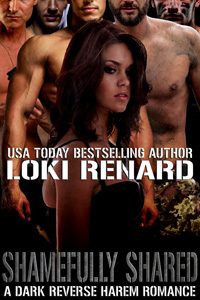 The last time I was in this much trouble, five elite soldiers risked everything to save me. Then I made a selfish choice that cost them their careers. Now I’m going to have to pay the price.

I didn’t have a choice, so I accepted the deal they offered. In return for their protection, these rough, battle-hardened men now own me. I’m theirs to share, not just for a night, but forever.

They’ll strip me, punish me, and use me again and again until I’m sore, shamed, and utterly spent. I’m going to get exactly what I deserve, and I’ll hate every moment of it… or at least that’s what I try to tell myself.

“I want to fuck your asshole,” Col repeated. “Hard.”

“Yeah, not so easy when it’s not your pussy in play, is it,” Col snorted. “I want to take a part of you that you won’t enjoy. I want to whip your ass red and then fuck it until you cry.”

“I just got started with you, girl,” Col promised darkly, patting her ass. “Get down on your hands and knees.”

She sank down next to him, going to her hands and knees in the dirt. This was filthy and depraved. This was wrong. Col kneeled behind her and she felt him pulling up what remained of the skirt she’d gotten from wardrobe.

He pushed the skirt up and she felt him wrap his fist around the gusset of her panties and pull. There was a tearing sound as he ruined her only pair of underwear, and then there was nothing but cool air between him and her.

“You’re a bad girl,” he growled. “The others don’t know how bad. Rex thinks you’re a brat. Chase thinks you’re an angel. But I know what you are, Lacey. You’re a scrappy little liar, you survive because you’ll do whatever it takes. You’re not weak. You’re not broken. You don’t need our protection. You’d survive anything and anyone. That’s why you keep finding trouble. Because it’s in your fucking soul.”

He pulled his finger out of her ass and spanked her hard several times, his palm exploding against her bottom with rough slaps that made her scream.

“I will be waiting, Lacey. Every time you fuck up. Every time you disobey. I’m going to have them send you to me, because I’m the only one who can really punish you, aren’t I?”

“Yes!” She screamed the word.

“What they do is too gentle, isn’t it,” he continued, belting her ass with his hand hard enough to make her cry out each and every time. “They tease you and get you close, but they never really satisfy the dark little slut in your soul.”