Shared and Examined by Bella Jackson 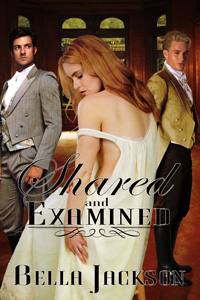 After stepping through a mysterious door in the bedroom of a rented cottage, Kathryn Williams is shocked to find herself in a Victorian nursery. Stranger still, the room is decorated as though it were meant for a small child but the bed is adult-sized. Her curiosity turns to shock when she discovers that not only is the nursery attached to a large stately home, but a man named Edward lives in the house and has apparently been expecting her. To make matters worse, when Kathryn demands an explanation of the situation, Edward merely pulls her over his lap, bares her bottom, and spanks her soundly.

Lord Edward, the Earl of Kendrick, and Doctor Phillip Gates live together at Ferngrove Manor as both close companions and lovers. While they find deep happiness in their relationship, both men desire a woman to share and enjoy together, and thus they elected to contact Miss Pritchard’s Training School for Little Ladies in America to ask that a woman be sent to them.

Though Edward and Phillip find the circumstances of Kathryn’s arrival odd, from the moment they meet her they are completely smitten by her beauty and her obvious need for discipline. She seems confused about some of the details of her contract with them, probably as a result of falling ill during her journey from America, but both men are confident in Phillip’s abilities as a doctor. It may require more than one thorough, intimate examination and a variety of treatments which Kathryn will no doubt find quite humiliating, but she’ll be healthy in no time.

As she learns to be a good girl for Edward and Phillip—with the help of a bare-bottom spanking whenever she misbehaves—Kathryn finds that their firm discipline and loving care soothe a part of her that she’s kept hidden away her entire life. But is she truly prepared to leave behind her life in the twenty-first century and become their little girl?

“Kathryn, I need you to spread your legs open, please. Drop your knees out to the sides.” Phillip did not give her a choice, using the force of his hands to guide her thighs open. The air filled with the scent of her arousal and cold air started to cool the steaming wetness that had dripped down her thighs, giving her gooseflesh and making the erectile tissue of her nipples crinkle like a scrunched-up piece of paper.

“Oh, my. Our dear Kathryn appears to quite enjoy our attention, Edward.”

“I can certainly smell her musky scent from up here.” His hand steadied on her shoulder as he leaned over to get a firsthand glimpse of her sodden folds. He took in a noticeable deep breath. “Ambrosia.”

Phillip added, “Just wait until we get a taste of her sweet pussy nectar.”

“Waiting will be difficult. My tool is already hard as stone,” Edward declared.

Kathryn could barely believe the way they so freely and easily spoke of her arousal. Her skin grew hot from embarrassment, leaving her deflated and helpless to stop the humiliation and shame. Her pep talk, only moments ago, was gone as swiftly as a tidal wave. In its wake Kathryn felt nauseated, realizing the fantasy versus the reality left her with two distinctly separate emotions.

She did not think her reaction would be so visceral but the way Phillip and Edward were talking about her physical response was mortifying. Her self-confidence bled out and was replaced with a pressing need to run away. She was absolutely unaccustomed to reaching such heights of lust, let alone have the evidence discussed by two outrageously beautiful men, both of them still staring at her folds. She blinked the tears that pooled in her eyes and stifled the sob building in her throat.

“Kathryn, whatever is the matter?” Edward asked, placing his hand on her forehead, brushing her hair back off of her face.

“I’m… I’m… it’s too…” Kathryn threw her free arm over her eyes and began to wail, bawling like the child they wanted her to be. She was appalled with herself at the display of emotions. She had lost all control over everything. Her body. Her emotions. Her physical location. It had built to a level of intolerance. Kathryn could not stop crying; the dam had burst and the flood of her tears whirled down her cheeks in a stream.

“Oh, dear,” Phillip announced. “I believe this confirms my thoughts for a diagnosis. Poor Kathryn is suffering with hysterical paroxysm.” Phillip rubbed up and down her thigh. “All of the symptoms together make perfect sense. Headache, emotional instability, built-up tension. It has been a long time, I am sure, since she has had a release. I must give her a treatment at once.”

2015-06-14
+admin
Previous: Balancing the Baby by Stardawn Cabot
Next: The Doctor’s Captive by Loki Renard