Shared and Punished by Emily Tilton 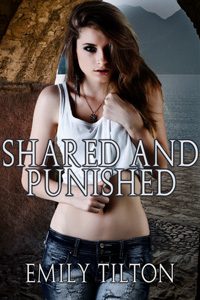 As far as Judith Grant knows, her hacking of a rival company’s network is her secret, and when she is invited on a trip to a resort in the Caribbean the twenty-three-year-old software engineer has no idea that she is being lured there to be thoroughly interrogated and shamefully punished.

The Praetorian Guard does not appreciate interference with corporations they control, and Judith will be made to reveal everything she knows. But her confession is only the beginning, and before the stern, handsome operative sent to deal with her is finished she will have been used, shared, and mastered in ways more humiliating than anything she could have ever imagined.

Publisher’s Note: Shared and Punished is a stand-alone book which is the fifth entry in the Bound for Service series, which shares the same near-future setting as The Institute Series. It includes spankings and sexual scenes. If such material offends you, please don’t buy this book.

Ned moved his fingers down to rub Judith’s unseen clit, and made her moan long and low. “I know this is all happening very quickly for you, so you may take some time to think about it. Are you a slut, Judith, sweetheart? Would you do anything to come right now, naughty girl?”

He pulled his hand away at the last possible moment, and Judith wailed in need. Ned gave her a hard spank, and then another. The girl cried out piteously.

“Reach back and spread your bottom nice and wide for me,” Ned said in a low voice. “Show me your sweet little anus.”

“Still ten,” Heather told him, “with a nice big clench there.”

Judith let out a tiny whimper, and then she moved her hands, a little awkwardly and very slowly, to her backside. When her fingers touched the warm redness Ned’s spanking hand had brought, her back arched, and the number on Heather’s screen flashed yet again.

“Wow,” she said over the comm link, “another recalibrator. I’m going to recommend paying even more attention to training her anally than we were planning on.”

As Judith hesitantly obeyed and a whining sound came from her chest at the sensation of the air moving against the hidden valley of her bottom, Heather toggled over to the window that showed the team of nymphobi in the other bungalow. She saw that Joe and Sam were watching Judith’s feed intently now, their cards laid down.

“Joe, are you listening in?” Heather asked. Joe tapped his jaw to acknowledge, and Heather switched back to the scene in Ned’s cottage.

Ned had his forefinger against Judith’s wrinkly little bottom-hole, where wisps of golden hair seemed to set off the girl’s innocence in this important area of her coming submission.

“We’ll take all the hair here away, soon,” Ned said, leaning down so he could say the words softly, even as he pressed gently at the rosy button where he and five other men would soon open Judith Grant upon their hard cocks. Ned first, though, as he fulfilled the task of getting what the Guard needed from the girl before they completed the discipline they meant to mete out to a very naughty young woman.

“What?” Judith gasped, twisting her face back over her left shoulder to try to get a look at the man whom she had no choice now, really, but to trust. Her arousal dropped to nine for just a moment as she considered, then rose back to ten, as Ned moved his thumb lightly to her clit to remind her of the pleasure she could earn by behaving like his good girl.

No choice but to trust him, for Judith, here over his strong knee, because her psyche could, quite literally, not contemplate the possibility that she had done the wrong thing by walking in the door of this bungalow. She had come too far. When the moment came at which she understood the full implications of putting herself in the hands of a man who meant to discipline Judith Grant as she truly deserved and needed, it would be much too late to run away.

“Why?” Judith whispered, when her master—for he could accurately be described that way now—did not answer with words, but rather with probing fingertips that told her just how thoroughly she had put herself in his power and just how greedily her young body had responded to his dominance. “Sir?”

“Because I want you that way, slut,” Ned answered.

2019-03-09
Chris
Previous: Instinct: A Dark Sci-Fi Romance by Loki Renard
Next: Trained by the Alien by Maggie Carpenter