Shared Between Them Makes Erotica Top 100 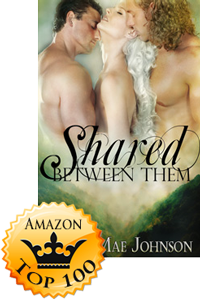 Stormy Night Publications is happy to announce that Shared Between Them, the newest book by Korey Mae Johnson, has made it onto the Amazon Top 100 list in the Erotica category, reaching as high as #64 this weekend.  At the time of this post, Korey is also ranked in the top 50 Erotica authors on Amazon.

We are extremely proud of Korey, not only as an author but as our in-house cover artist, web designer, blog manager, and eBook formatter, among many other roles, and also as the primary reason that Stormy Night Publications exists at all.

Note: Korey was too modest to write this post herself, so it was written by James (her husband) instead.

As soon as I started reading I was hooked! Two cousins Taric and Draeven, alpha warriors on a quest, meet and fall in love/lust with an elfin woman, Kyra, and the story just picks up speed from there. Korey Mae Johnson excels at writing this type of story. It is so well written you have no problem feeling as if you are there or that the fantasy land is quite real. Strong characters that you can not help becoming invested in keep you turning the pages. And let me just say this is one steamy, sexy story no doubt about it!! I sincerely hope there will be a sequel!! Well done!!

Shared Between Them is a ménage story full of great spankings, good sexual scenes, and an awesome story to follow! The story starts with the heroine Kyra being reluctant to the two fierce warriors Dravern and Taric who have their sights set on her, but as the story progresses she not only warms up to Dravern and Taric but actually finds herself in love with them. The spankings scenes were given in great detail and were not redundant as you find in a lot of spanking stories. The sexual scenes were addicting with a great variety mixed in including humiliation and lots of oral action. The ménage sexual scenes were the best due to double penetration and being dominated by two men at once, but there was plenty of scenes with just one partner as well. The story line was great with the fierce two warriors coming in to save the day several times, and Kyra turning out to be a warrior herself. The story was full of humor and action and was extremely addicting. If your looking for a story with two alpha males, lots of spankings, and some ménage action then this is most definitely the story to read!

A very nice menage story.Full of all the exiting stuff like, Elfs, handsome warriors and a courageous beautiful heroine! I do hope this is the first in a series of books! Thank you for an enjoyable read Ms Johnson!

Very Hot. Interesting story. Great chemistry between the three of them. Very well written. I wanted more story at the end showing how they settled into their new life. I’m looking forward to the next book, if there is going to be one. I would also like to see some justice/happy ending for the outcast race what the elves did to them was terrible.