Shared by Her Soldiers by Dinah McLeod 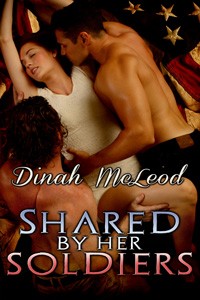 When Kaitlyn Green’s husband Sean is deployed overseas, he asks his best friend and fellow soldier, Jarrod Peters, to keep his wife in line while he is gone, even if that means taking her over his knee for a good, hard, bare-bottom spanking as often as he feels it necessary. Kaitlyn is less than thrilled by this arrangement, but despite her embarrassment at being treated like a wayward teenager she cannot help growing closer to Jarrod with each passing month.

Upon returning home, it doesn’t take Sean long to realize that while Kaitlyn remains deeply in love with him, she has developed strong feelings for Jarrod as well. Knowing that Kaitlyn is enough of a handful to keep two men busy, Sean discusses the situation with Jarrod and together they decide that the best solution is to share her completely.

Soon Kaitlyn finds herself being soundly spanked by two firm-handed men and then claimed by both of them at once. Though she is amazed by the intense pleasure which results from surrendering to their skilled, dominant lovemaking, Kaitlyn still cannot help wondering if she will truly be able to keep both men in her life forever. Can Sean and Jarrod prove to her that the bond between the three of them will hold no matter what?

Suddenly, she felt Sean’s hand on her shoulder, caressing her. She felt him move closer, until she was sandwiched between the two of them. Her mind screamed to her that she should feel trapped, but being caught between these two men made her feel freer than she’d ever felt in her entire life. When she felt Sean caress her ass, she moaned around Jarrod’s cock and pushed it out toward him.

“That’s not what I want,” he chuckled behind her. “Not tonight.”

Nothing broke her concentration on her task as she bobbed up and down Jarrod’s cock. But she stilled when she heard the sound of his pants hitting the floor, for the slightest instant before she was sucking away again.

She was so soaking wet that it took no time at all for Sean to grab her by the hips and thrust inside her. Even though she’d been expecting it—or more like hoping for it—she was still caught off guard by the fullness she felt having two holes occupied at once. It felt so naughty and delicious that she came on the spot. She could feel her pussy clench his cock as her orgasm shuddered through her body.

On a normal day, she would collapse against the pillows after coming, or turn on her side and close her eyes. But this was not a normal day, and she found that not only did she not feel spent, in fact she had more energy coursing through her than she knew what to do with. She sucked Jarrod hard and fast, and moved her hips in time to Sean’s thrusts. It was all she could do to keep up with the both of them, and it didn’t leave any room for feeling tired.

Kaitlyn licked her lips, continuing to savor the taste of Jarrod in her mouth while Sean pumped hard inside her. Every now and then his balls would slap her hot, punished ass, but rather than hurting it only seemed to fuel her lust. She could feel her tummy tying itself in warm knots of pleasure. She smiled, knowing that she was close to orgasming. This one, she felt, wouldn’t be over quickly, but would take its time charting a course throughout her entire body.

It started with her nipples. They budded and hardened like pebbles. Almost as though he’d sensed it, Sean reached up and ran his finger over one of her stiffened nipples. She gasped, and he pinched it between his fingers, turning her gasp to a moan.

The feeling of absolute arousal traveled down to her belly, where the knots were tightening, which meant she was getting closer with each and every thrust. Sean growled behind her, squeezing her breast as he thrust harder.

“You’d like that, wouldn’t you?” he ground out. “Naughty girls take it the way their masters choose to give it.” And then, much to her dismay, he deliberately slowed down. There were times when his slow, careful thrusts delighted her, but tonight they only prolonged her agony. What was worse was that he knew it.

2016-02-27
+admin
Previous: Lucy and the Doctors by Ava Sinclair
Next: The Secret School for Little Girls by Rose St. Andrews