Shared by the Barbarians by Emily Tilton 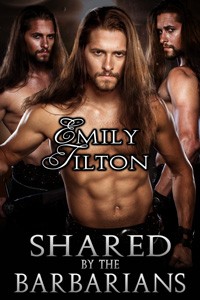 In the time since she was abducted from her world by a cruel, tyrannical general, eighteen-year-old Jalinda has been given little reason to trust any man, let alone three barbarian brothers who take it upon themselves to rescue her. But the rough, handsome warriors intend to share a wife, and they mean for that wife to be Jalinda. Shocked by the thought of belonging to three men, she refuses to go along with their plan, but her lack of cooperation is quickly overcome by way of a switch applied to her bare bottom.

Upon reaching their home planet, the brothers waste no time in beginning their shared bride’s training. As Jalinda soon discovers, she will be expected to submit to them absolutely, and disobedience will result in punishments far more humiliating than a mere bare-bottom spanking. Her barbarian husbands will protect her, provide for her, and love her, but they will also enjoy her in any way they desire. She will be claimed by each of them and by all of them together, in private and in public, in ways that will leave her blushing crimson yet also burning with need.

Despite her shame, before long Jalinda finds herself craving the intense pleasure which results from surrendering herself to the brothers’ masterful lovemaking, and with each passing day she grows fonder of the men who freed her from the sadistic general and made her their own. But her former captor is not an enemy to be taken lightly, and when he comes after the brothers with an army at his back, intent on vengeance, can they protect both their world and their woman?

“Take the fur off, Jalinda,” Hed said. “Or I will take it off for you, and spank you, too. You must learn your place.”

The sleeping fur in which Pag had stolen her from the general’s palace hardly covered her at all anyway, but it had felt comforting, at least, to have some concealment.

Pag said, “Do as Hed says, Jalinda. Drop the fur and then sit on the bench behind you. You will present your cunt to us now.”

Again Jalinda felt the resistance she had felt on the Pride of the Trestrimar, at the thought that she had to do this shameful thing—though she did not even yet understand what they meant by presenting her private part. She looked at Hed, looming above her. Her hands trembled as she parted the fur and slid it back over her shoulders. She could stand to be naked in front of them, surely, for her stay in the women’s tower, being prepared for the general, had taught her that as she watched other girls be naked for punishment. And hadn’t waiting naked for the general, and seeing the terrible scene of the feast, where she had received the horrible whipping on her bare bottom for no reason and had thought the general was about to do to her what Pag and his brothers had done to their own naked girls, made it easier?

Gep said, with more seriousness in his voice than she had heard before, “Jalinda, a wife of the Trestrimar must understand that her naked body is a possession—a prized possession—of the men who care for her. If you will not show Pag and his brothers the respect they deserve, Hed is correct: you must be spanked until you learn your place.”