Shared by the Doctors by Samantha Madisen 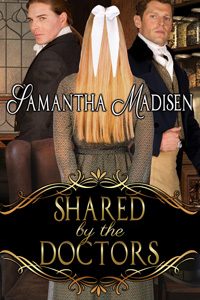 Dr. Amy Wenders has spent years studying time travel, but it still comes as a shock when a mishap in her research facility sends her back to the Victorian era. To make matters worse, she arrives on the doorstep of Andrew Chambers and Richard Stevenson, two physicians who run a clinic devoted to the practice of corrective therapy for naughty young women, and the strict, handsome doctors mistake her for a new patient in need of treatment.

Amy’s defiant protests merely earn her a painful, embarrassing spanking, and she is informed that if she is going to behave like a child she will be treated like one. Her shame increases when the two gentlemen bring her before a dozen of their colleagues, where she is stripped bare, cleansed thoroughly, and then brought to a blushing climax in front of the entire group.

In spite of her shame at being punished and displayed in such a humiliating manner, Amy cannot deny her body’s response to Andrew and Richard’s stern, skillful dominance, and when they take her in their arms and claim her completely she is left more satisfied than she could have ever imagined. But when they decide to make her their shared bride, will she abandon her efforts to return to her own time and embrace her new life as their little girl?

Publisher’s Note: Shared by the Doctors includes spankings, sexual scenes, and elements of age play. If such material offends you, please don’t buy this book.

Amy’s eyes popped wide open at what she’d just heard. Richard, who’d walked across the room toward her as Andrew had been talking, already had her by the arm and was leading her back toward the table she’d been on yesterday.

“Uh… hold on a second,” Amy said, tugging at her arm and leaning backwards.

“It’s crucial to train for your complete submission to us. If executed properly, and with your cooperation, the experience can be pleasant and rewarding for all. Please don’t resist. We know what’s best for you.”

Andrew halted in the middle of his explanation and gave Richard a look.

Richard stopped in his tracks, spun her around with one hand, and bent her over. She soon felt a firm swat on one cheek, then the other.

The pain from yesterday’s whipping coursed through her as his hand landed on her behind. “Okay, okay! I’m sorry!” Amy cried out, unable to bear it any longer.

Richard’s spanking stopped as he straightened her up again. She let herself be led to the table and helped up onto it by Richard. As she stepped up, Amy noticed the small plug that Andrew was holding up, as if on display.

As Andrew moved closer, Richard stepped back. Amy felt a rush of adrenaline. She looked at Andrew with pleading eyes, hoping he might change his mind.

Andrew frowned. “Of course you don’t, my dear. That’s why you need to be trained. But don’t worry in the slightest. I’ve an excellent technique for this, you’ll see.”

Amy shook her head but one glance at Richard looming behind Andrew was enough to convince her she really had no other choice. She climbed up onto her hands and knees, her rear facing them.

A fresh swell of embarrassment raced through her as she realized what she’d just signed up for. Had she made a mistake? Would she ever get the chance to go home now? Why had she made this crazy decision? She looked back to see Andrew stepping toward her, the implement in his hand.

But it was Richard’s hands she felt touch her first. She looked back to see him tightening two cuffs around her wrists and ankles. He pushed her down on the table, pressing her face against the top, and pulled her hands in between her knees. She tried to look back but couldn’t. The cuffs seemed to have attached to the table, leaving her immobile with both her holes open and completely exposed.

Amy let out a whimper at how bare she felt. She knew both men could see every inch, every crevice of her intimate places. She felt her face go red with shame but there was nothing she could do. She could only wait and see what they were going to do to her.

2017-04-09
Chris
Previous: The Dragon’s Pet by Loki Renard
Next: Under House Arrest by Sassa Daniels