Shared by the Gentlemen: A Victorian Romance by Aurie Jameson 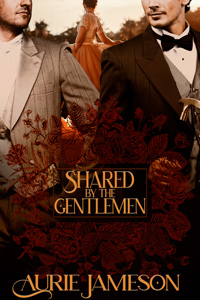 Not long after arriving at their newly inherited estate, Leon and Emil Bennet are surprised to discover eighteen-year-old Eliza Hill living in an old carriage nearby. Deciding that they must take matters into their own hands, the two gentlemen offer the headstrong orphan a place to stay, and her defiant refusal to accompany them is quickly dealt with by means of a sound spanking.

Though she accepts their charity only grudgingly, Eliza cannot hide her helpless arousal when continued disobedience earns her an even more shameful correction, and she soon finds herself longing to be claimed properly. But when Leon and Emil make it clear they plan to enjoy her beautiful virgin body together on her wedding night, will she still agree to be their shared bride?

Publisher’s Note: Shared by the Gentlemen includes spankings and sexual scenes. If such material offends you, please don’t buy this book.

Eliza looked over her shoulder at them, her eyes a perfect blend of shock and fear. “But you mustn’t!” she cried, thoroughly confused. Her face must have been the same shade of red as her bottom. She couldn’t even begin to explain the sheer humiliation of having her bottom hole touched. She gazed fearfully over her shoulder once again and watched as Emil dipped his fingers into a clear jar. When he withdrew his hand, two of his fingers were coated in some kind of oil.

“Keep your eyes forward, young lady,” Leon ordered, spanking her bottom when she didn’t obey immediately. Once her face was turned away from them, he grabbed one fleshy cheek in each of his large hands and pulled them apart so that her back hole was even more exposed.

Emil took his time coating his fingers in the oil and watched Leon pry their wife’s bottom apart for the next part of her training. He knew they were both admiring the winking entrance. It was soft, pink, and perfect. It reminded him of a delicate, budding rose. It seemed to shy away from them, spurring on their actions.

Emil’s and Leon’s eyes met and the latter gave a meaningful nod.

Eliza’s whimpering was endless now as she felt her cheeks spread apart. She couldn’t believe what was happening to her. She felt as if her entire body was blushing as she was made to hold the humiliating position.

“Soon you will be expected to take us here,” Emil told her, lightly pressing his greased finger against the little bud. He grinned when it flinched away from him.

Eliza gasped. “No, I couldn’t!” She attempted to close her cheeks, but Leon’s firm hands kept them apart.

“Not yet you can’t,” Emil agreed. He pushed the tip of his finger past Eliza’s protesting hole, growing hard at the sight of the thick digit slowly disappearing inside of his wife. “We need to prepare your bottom hole by stretching it out.”

“Hush,” Leon scolded sharply. He would have swatted one of her full bottom cheeks had he not been holding them apart. He settled for digging his fingers a bit more firmly into the soft flesh, eliciting a squeak from Eliza.

Eliza lowered her head and settled for whimpering and crying softly as Emil stretched her bottom hole. She gasped when he suddenly slid his finger all the way in and held it inside for a moment before twisting it inside of her. She groaned and shivered at the strange, uncomfortable sensation. There was no pain until Emil began twirling his finger inside of her, then a dull burn started.

“Shh,” Emil soothed, pausing in his twists to rub her back. “The burning will subside in a few moments, love.”

Eliza squeezed her eyes shut and bit her lower lip, not believing him in the slightest. She let out a long shuddering breath when Leon began to knead her warm mounds. She hummed slightly. His hands felt delightful despite the burning in her bottom. She opened her eyes suddenly when the burning did indeed begin to ebb away. She felt something else replaced it and gasped quietly in surprise.

Arousal struck her, so undeniable and potent that it was almost painful.