Shared by the Highlanders by Ashe Barker 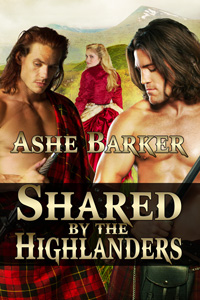 After she becomes lost in a thick mist while hiking near the borders of Scotland, Charlene Kelly is shocked to encounter two men on horseback. To her horror, the pair—both of whom are dressed in Scottish tartans—accost her and won’t let her go. Though the men speak with accents so strong they seem to come from another era, Charlene is able to gather that they believe she is a thieving boy. Unsure what else to do, Charlene plays along.

When Will Sinclair and Robbie MacBride discover that their captive is in fact a woman—and quite a beautiful one at that—there is only one thing to be done. She must be punished for her deception, and punished thoroughly. A switch applied to her bare bottom does the job well, and soon enough the two men are comforting Charlene as she nurses her bright red, sore backside.

Upon learning that the highlanders are hand-carrying an important message from Elizabeth of England to the court of Mary, Queen of Scots, it finally dawns on Charlene that she is no longer in her own time. Though she is desperate to find a way home, Will and Robbie are both unlike any man she has ever met, and their unabashed dominance awakens in her a powerful need to submit. Soon enough, she finds herself blushing with shame and quivering with desire as she is taken long and hard by two rugged highlanders at once. But can these hardened warriors keep her safe from the perils of a world far more dangerous than the one she left behind?

“Spanking! No way. You are not spanking me.”

Robbie grins, his expression unrepentant. And determined. “We are, lass. Right here and now. See yonder oak beside the stock shelter there? You’ll be bent over the branch that stretches out to the side, your wrists and ankles tied together to make sure you don’t shift from where we place you. You’ll be naked of course, your arse tilted up for easy reach. Then you’ll take six strokes of the switch. From each of us.”

“Aye, you could call it that, I daresay, since you’ll not be acquiescent by the sound of things. Don’t look so stricken, lass, it’ll soon be done with and we can all be on our way.”

“You promised I wouldn’t be hurt. Last night, you said that.”

“I think what we actually promised was that we would do you no harm. And we won’t. A little firm discipline though, now that’s another matter entirely. I’ve yet to meet the woman whose disposition was not the better for a well administered paddling. And most are truly thankful for it too, in the fullness of time of course.”

“You’re mad. The pair of you. You should be locked up. If you lay a hand on me, just one hand, I’ll report you, and, and…” I give up my attempt to reason with them and fall back on the only remaining option that makes any sense to me. I turn and I run.

I get all of three paces before I’m grabbed from behind and swung around in Robbie’s powerful arms.