Shared by the Pirates by Emily Tilton 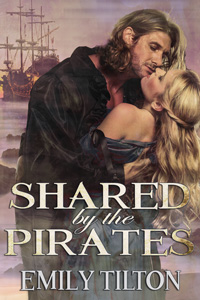 When nineteen-year-old Lady Evangeline Stratford learns that her father has arranged a marriage for her in order to pay off his debts, she plans her escape on a merchant ship bound for America, but it is only after she is already helpless on the high seas that the truth about the vessel’s crew is revealed. The men are pirates, and she will be required to pay a shameful price for her passage.

The blushing virgin will be stripped and spanked, then made to pleasure the captain and each and every one of his buccaneers, all before she is claimed and ravished by the stern, sexy first mate.

Publisher’s Note: Shared by the Pirates includes spankings and sexual scenes. If such material offends you, please don’t buy this book. Also note that an earlier version of Shared by the Pirates was previously published under the title Lady Evangeline’s Piratical Persuasion as part of a multi-author collection entitled Pirates, Passion, and Plunder.

“Put them over the barrels, then,” Philip ordered, “and take their clothes away. Perhaps we can persuade them to suck you with the cat across their rumps.”

Evangeline cried out as she felt herself drawn by the hands of five or six pirates toward the cask in front of her, and she heard Mary make a similar noise of alarm next to her, though she could not see her maid through the crowd of leering men bent on conveying both of them to the place of punishment.

They made her kneel in front of the barrel and then they drew her arms out so she must lie over it. They tied her wrists to the bottom of a metal post fixed into the wood of the deck, and Evangeline wondered how many girls before her had undergone the same terrible ritual, been fastened to the same post.

“The skirts!” Scarty shouted. “Let’s get the skirts up, lads, and see the arses!”

Evangeline felt her gown and her petticoats, and finally her chemise lifted as if by many hands at once, and her cheeks burned to know that so many masculine eyes could see all the intimate charms that her governess had told her would belong to her husband one day. At the same time, to her distress, the notion of the pirates gazing upon her bottom and between her thighs, for hands had parted her knees widely, too, made a shameful fire run through those parts.

“Look at that,” said a voice that she thought she recognized as Mulroy’s. “Mistress and maid don’t look too different, do they, lads? Scarty and Grendon, let’s see those arse-holes, as well. We may have to wait to break them in, but I’m going to give it to them all the harder for the delay.”

Evangeline meant to keep herself from crying out, but when she felt Scarty’s rough hands parting her bottom, and sensed the cool air moving in a place where it should not move, she could not help it. She said, “No! Please!” but to her horror the syllables came out thickly, as if perhaps she did not mean the no.

“Get a close look, Captain,” Grendon said. “You shall judge, and not Mulroy, if these holes are the same on a maid as on a lady.”

“Test them with your finger, too, Captain,” Mulroy said, as if wishing to make sure the crew thought him loyal to the captain. “A man can learn a good deal about a girl that way.”

“The maid isn’t a maid,” she heard the captain say, as Mary gave forth a piteous, low moan. “Norris and I heard all about it last night. The cunt feels tight on my finger, though. Let’s see the mistress’, then. Scarty, you hold her open.”

“Oh, no…” Evangeline wailed, but she felt the fingers down there, as Scarty stood over her reaching down from nearer to her face. He spread her cunny, first the outer lips and then, to her horror, the inner ones, too.