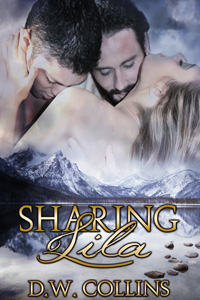 Nineteen-year-old Lila hoped for the best when she left Pittsburgh and set out to help her father start a new bank in the hardscrabble western town of High Meadow, but when her father is killed in a bank robbery her peaceful world is shattered.

Carried off by outlaws to be used for their pleasure, salvation comes just in the nick of time for Lila in the form of two mountain men, Davis and Jake, who ride to her rescue. With nothing left for her in Pittsburgh or in High Meadow, Lila accepts the men’s offer to cook and clean for them in return for food, shelter, and protection.

Davis and Jake treat her kindly, but she is informed that as long as she lives at their cabin they will expect their rules to be followed, and to her dismay she quickly learns that misbehavior will earn her a long, hard, bare-bottom spanking. Though their firm discipline leaves her backside sore and her cheeks blushing, Lila finds herself falling for her rough yet handsome rescuers, and soon she longs to be claimed first by Davis, then Jake, and then both of them at once…

A flash of realization crossed her frantic face. “No! Stop! You can’t do this. I’m not some child.”

Lila’s protest was hardly across her lips when she felt cool air on her freshly exposed bottom. She was a respectable girl who wore pantalets whose two halves were joined by a ribbon, but that garment left her bottom completely bare. “This is your first punishment, so I will only use my hand,” Davis said as he pulled the silky bow and allowed her drawers to fall around her ankles, leaving her bare from her waist to the top of her plain white stockings. She kicked the entangling drawers away. He rested his palm on her upturned posterior.

“Humiliation is an important part of any naughty girl’s punishment,” Jacob said as his boot nudged her feet apart.

Lila’s face flamed as she realized that her most private parts were now completely exposed to the Taylor men’s gaze. She had fantasized about allowing Davis to see her feminine charms, but this was definitely not what she had in mind. “Please have mercy and take me inside. I don’t want some stranger to ride up and see me like this.”

“How many visitors were you expecting?” Jacob said with a laugh. “Consider yourself lucky; the next time you’ll be feeling a belt,” Jacob added. “Behave so we can get this over with or you’ll get more right now.”

She tried to move her feet together, but Davis’s boot blocked the way. “Stop resisting,” Davis growled. “Stay where I put you.” The porch rail rubbed her exposed skin as she squirmed.

Davis raised his hard palm and brought it down on the fullest part of her round bare bottom with a loud crack. The burning pain shocked Lila; she could not believe that her handsome Davis would mistreat her in such a harsh way. Her eyes began to water and she resolved to try to keep still and ignore this humiliating situation. The next blow landed an inch lower. That infernal pain made her grunt in a very unladylike manner. She wanted to cover her bottom with her hands, but Davis was gripping her wrists and he held them at the small of her back. She squirmed uselessly while he delivered more fiery blows.

Lila’s bottom grew hotter and hotter; it was on fire. Her fair skin changed from rose to pink to scarlet, but the stern chastiser did not stop. Instead he slowed the speed of his chastisement and let his hand linger a few seconds after each blow. That only made the girl’s pain and humiliation worse. “How can you do this to me?” she wailed.

“We would rather blister your butt than bury what’s left of you,” Jacob growled. “Keep your mouth shut and try to learn your lesson. I don’t think you want to add any more punishment for rude remarks.” Davis roasted her bottom with another series of spanks. She kicked her legs frantically and her shoe went flying.

Davis brought his hand down again and again until she lost count of his blows. She did not even realize that he had stopped until she felt him pull her to her feet.

Her eyes and cheeks were wet and red and her nose had dripped down her chin. Davis turned her body so it faced Jacob and she hoped he would not notice that her thighs were embarrassingly wet. What was wrong with her? How could a spanking make her feel this intense excitement?Part of her wanted the spanking to end and another mysterious part wanted it to go on. She felt like she was on the edge of a high cliff and she could hardly breathe. Mercifully, her skirt fell back into its proper place. “Have you learned your lesson yet?” Jacob asked sternly.

2014-08-14
+admin
Previous: Alice and the Colonel by Jaye Peaches
Next: The Traveler’s Bride by Chula Stone