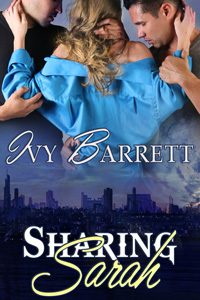 Though the highly advanced treatment saved her life, Sarah Wylie has been adrift since her condition was cured and she lost her prophetic gift. In desperation, she has experimented with ever more forbidden and dangerous ways of recovering her abilities, but it is only when she is sought out by a being of vast power that she is truly given a chance to fulfil her destiny.

But what this ancient entity demands of her will not be easy. Sarah will be required to surrender her body to be taken long and hard by not one, but two men, who will strip her bare, spank her thoroughly, and bring her to one shameful, quivering climax after another until she has been utterly and undeniably mastered. Only then will she be ready to withstand what must take place.

Though brilliant scientist Allen Lansky and battle-hardened soldier Rayden Kolter could not be more different, they each have a place in their heart for Sarah, and when they are called upon to claim her as theirs and dominate her completely, they stand ready to provide what she needs.  But can they put pride and stubbornness aside and join together to do what must be done?

Publisher’s Note: Sharing Sarah is the fifth book of the Captives of Stilox series. It includes spankings and sexual scenes. If such material offends you, please don’t buy this book. Also note that an earlier version of this book was previously released by another publisher with the title Seer.

“When you please me, I will reward you with pleasure.” He kissed his way down her neck and caressed her breasts with unexpected tenderness. Then he raised his head and looked back into the mirror. “But displease me, disobey me, and I will punish you.”

Before she realized his intent, he grasped the back of her neck and bent her forward over the vanity. His large, strong hand spanked her bare bottom, the distinct crack of flesh on flesh echoing in the bathroom. She gasped, then yelped as he continued the stinging swats.

“But I haven’t done anything wrong!” She reached back, trying to cover her bottom.

He easily caught her wrist with his right hand and secured her arm behind her back as he spanked her with his left. “This is about ownership.” He continued his punishing strokes, heating her skin and sending pulsing discomfort deep into her muscles. “Your lovely ass is mine to do with as I will. Do you agree?”

Tears gathered in her eyes and her throat was so dry she barely forced the words out. “Yes, Sir.”

His left hand slipped between her thighs and he swatted her wet folds. She cried out more from surprise than pain, but he didn’t stop with one symbolic spank. He slapped her again, harder, sending bright sensations zinging through her pussy. Then he thrust two fingers deep into her wet core. “This pussy is mine.” He paused with his fingers still inside her. “Do you agree?”

She’d asked him to fuck her. Wasn’t her consent obvious? “Yes, Sir, but I don’t just belong to you. I must also share myself with Allen.” He moved his hand, sliding his fingers in and out. The thrusts were sharp and fast, possessive. This was about control. He was establishing his mastery of her body, even if he had to share her.

As if to confirm her conclusion, his wet fingers moved to her other opening. She braced for a brutal entry and the inevitable sting. Instead, he teased her, circling and stroking before pushing inside.

She shuddered, a vivid image forming in her mind. Rayden lay on his back and she straddled his hips, his massive cock buried in her pussy. Allen knelt behind her, his cock filling her ass.

“Do you really want that?” he persisted, his fingers sliding in and out of her ass.