Sharing the Princess by Katie Douglas 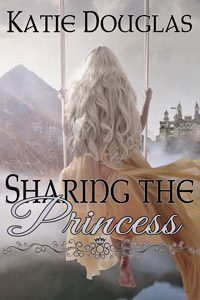 After Princess Leandrina falls in love with a blacksmith named Ben, the couple take refuge in the kingdom of Queen Elspeth of Dovedale. Leandrina’s father offers a great reward to any man who brings her back home, but the knights who take up the quest quickly discover that the princess is quite ably protected by the stern, handsome blacksmith and the beautiful, powerful queen.

When Leandrina puts herself at risk with her disobedience, however, she soon finds her bottom bared for a sound spanking from her firm-handed protector. The shameful chastisement arouses the princess deeply, and she seeks comfort in the arms of Elspeth, but after Ben hears of it and punishes them both soundly, he and Elspeth decide that from now on they will share the princess.

Their situation grows more complicated when Elspeth falls in love with Sir Cedric Wilmslow, one of the knights who had sought to capture Leandrina, and decides to aid him in his quest to free his captive brother. When the princess, the queen, the knight, and the blacksmith end up facing off against a marauding dragon, will they emerge victorious?

Publisher’s Note: Sharing the Princess includes spankings and sexual scenes. If such material offends you, please don’t buy this book.

“I think our princess needs a lesson to remind her that when I ask a question, I expect an answer,” Ben said, relinquishing her breasts and lifting her up, easily supporting her weight as he carried her to the edge of the bed then bent her over it, so her mounds were upturned and her face was pressing into the sheet. She tried to push herself upright but Ben’s hand held her firmly and stopped her from being able to escape.

“Cedric, take note; you might need to do this for her one day. If she struggles, take her wrists and press them into the small of her back like this,” Ben took each of Lea’s wrists and pinned them to the deepest curve of her spine, where she couldn’t get away at all.

“Then what?” Cedric asked, and Lea tried to psychically slap him but alas, she had no magical powers. It was probably for the best, she thought.

“Then you take your other hand, get a nice swing like so, and just bring it down on this part of the buttocks, where she sits,” Ben said, spanking Lea’s cheeks with a ringing swat that echoed in the room.

“How do you know when you’ve spanked her enough?” Cedric asked, as Ben brought his hand down hard on Lea’s bottom twice more. She gasped for breath and wished she was ten feet taller so she could overpower them for a change.

“The punishment should always fit the crime, so this time she’s only getting a dozen or so. I just want to remind her that she has to answer questions when they are asked.” Ben’s hand made a loud cracking noise as it punished Lea’s unprotected mounds.

“Please, Ben, I’m very sorry!” Lea declared, as her cheeks started to feel very uncomfortable. He stopped a moment later and stroked her hair, although he kept her pinned over the end of the bed.

“Good girl, Lea,” Ben murmured, like he was taming a cat. Lea sighed under his hands. “You will notice, if you look down here, that her slit is now getting fairly wet. That’s a normal response to a light spanking and unless you’re punishing her for a big transgression, you should make her come fairly soon after spanking her,” Ben explained to Cedric. Hearing him talk about her like that made Lea feel even more aroused, and soon her clit was competing with her slightly sore bottom cheeks for her attention.

“So you’re going to fuck her now?” Cedric asked, his voice sounding thick. Lea was willing to bet that he needed to have sex soon.

“We both are. But first she’s going to answer my question, aren’t you, Lea?” Ben’s voice was steely as he turned his full attention back on Lea. She quivered slightly and tried to remember what he’d wanted to know.

“Yes, Ben. What was the question?” she asked.

“You were going to tell me what you’ve been imagining Cedric and me doing to you,” he said.

2017-04-15
Chris
Previous: Under House Arrest by Sassa Daniels
Next: Their Naughty Human by Korey Mae Johnson