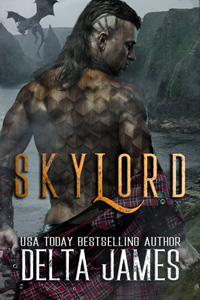 She set out to slay a dragon. She ended up claimed and bred.

When Duncan awoke from long centuries of sleep, Aurora was waiting for him, ready to strike him down and avenge her ancestors. But the Lord of the Sky is not so easy to kill, and she ended up punished, sore, and screaming with every helpless climax as he ravaged her mercilessly.

But the ancient beast didn’t just strip her bare, spank her until she was soaked and sobbing, and then use her as savagely and shamefully as he pleased. He did much more than that.

He bred her, seeding her virgin body ruthlessly and thoroughly, over and over again.

When a dragon claims his mate, he leaves no doubt she is bound to him forever.

Publisher’s Note: Skylord is a stand-alone novel set in the same world as Warlord, Overlord, Wolflord, Dragonlord, and Sealord. It includes spankings and sexual scenes. If such material offends you, please don’t buy this book.

He leaned down, cupped her behind the head and kissed her deeply, thrusting his tongue inside her mouth and enticing hers to come and dance with his. She bit down and was rewarded when he pinched her nipple.

“Ouch! You bastard! That hurt!”

“Aye, I’m sure it did. So did that little love nip. Behave yourself.”

“You can’t keep me naked and in chains…”

“That’s where you are wrong. I am your mate and your liege lord. I can do what I like.”

“Enough! Perhaps as you were so recently a maid, it has never occurred to you that taunting a man who would like nothing more than to have you on your knees in front of him while he plows your pussy from behind is not a good idea.”

Duncan laughed. “I assure you that not only can I, I will; I’ll fuck your mouth and your bottom hole as well. And when I let the dragon’s tongue do its job, I’ll have you doubly penetrated below while I kiss you… and worse yet, I’ll make you beg for it.”

He reached for her ankle and she kicked at him. He merely chuckled and grasped her thighs in his hands as he towered over her. She felt the heat of his body radiating out and enveloping her. Fire burned through her veins. Even when creating powerful magick, she had never felt like this. Even though she burned, her body shivered. Her nipples were pebbled and hard and ached to feel him touch them. Her feral lust pooled between her legs and threatened to leak down her thighs. His cock tented the kilt he wore. No! Not that, she would not be claimed again!

Duncan moved his hand up under her shirt and made short work of stripping it from her body and rendering her naked. Her generous breasts were put on display so that his large hand engulfed one to knead and play with it before focusing his attention on the nipple at its center. Despite her unwillingness to do so, a soft moan escaped her lips as Duncan hummed at her and continued his sensual assault on her body.

Duncan continued to play with one breast while he traced the centerline of her body down to her mons; he cupped it gently as if to weigh its value before slipping between her thighs to tug and stimulate her nubbin.

“Duncan,” she pleaded, but pleaded for what?

Part of her knew he was dangerous, knew that completing this act with him was the most terrifying thing she had ever contemplated. But that sane portion of her brain was being overridden by her need to feel this man’s most intimate touch again and to know the full measure of his lust. His fingers continued down, parting her swollen labia as he probed for her opening and chuckling at the evidence of her profound arousal. She was no longer fighting him and was actively encouraging his touch. He flipped her over onto her belly, drawing her hips up and back toward him. The palm of his large hand still framed the apex of her thighs and he held her in place as he rubbed himself against her backside.

His hand left Aurora’s breast to snake down between them, removing his kilt in a single swipe of his hand, freeing his cock. Aurora glanced back over her shoulder and gasped. Not only was his large cock completely engorged, so was the hard ridge of tissue that he called the dragon’s tongue. It twisted around his staff from the base, ending right behind the crown. She shuddered at the thought of the pleasure he meant to inflict upon her again.

She tried to struggle, both physically and mentally, but did not have the strength or will to do so. He was her enemy; she was sworn to kill him and the rest of them, but she was beginning to think she would never be able to do so. She wanted this as much as he did… maybe more.

Duncan rubbed the head of his fully engorged staff between her legs so that it skimmed between her lower lips causing both a light friction and increasing her body’s responsive lubrication. Finding the entrance to her core, he grasped her hips with his hands and surged forward, powerfully enveloping his hard cock in her wet heat. She wailed as a powerful orgasm overtook her.

“So much for my not mounting you from behind. You will learn, my true heart, that it is best not to goad me when I’m intent in sinking my cock in your cunny.”